Right next to the name is a number indicating how many images are in that folder. Each sub-gallery has a thumbnail, which displays either the latest image (if the folder contains less than four images) or four thumbs if there are at least four files in this folder. There is no way to change these view options.

From the main Gallery there are two new shortcuts that allow you to start recording videos or capture images. On the other hand the flip orientation shortcut is now gone as there is a system-wide UI auto-rotation.

The new keys are very convenient

Sadly, still there is no option for multiple marking of images for mass cut/copy/delete. However scrolling thumbs of images up and down is even smoother and quicker now. Caching images may take quite a while when you open a gallery for the first time, but once that's done, they are loaded almost instantaneously even if a folder contains thousands of them.

Zooming in and out has also been improved in this version of the OS. You can zoom to 100% with simple double tap on the screen. Additionally, the zoomed area is where you double-tapped. The gradual zoom is on bigger steps now, which we find to be much more convenient. Another addition is the crop key in the contextual menu in an opened image.

The video player application is quite straightforward - you have only play/pause and rewind buttons with no other options whatsoever. As a matter of fact, the player's interface looks exactly the same as the third-party app we installed on the G1. Unfortunately it is only capable of playing 3GP and MPEG4 videos, which means that you will have to convert most of your videos for watching them on the HTC Magic.

Playing video files from the Gallery

The icons in the music player in HTC Magic are different from what we saw in the T-Mobile G1. We do like them a lot better than the simple white icons in the previous edition of the player.

The icons in music player has more volume now, but generally the player UI is still the same

Nothing new in the now-paying menus

The functionality of the music player hasn't seen too many changes except for a single great feature added. Holding down a finger over a song activates the menu that allows you to look up the song title serves in YouTube or through a Google search. What's even better the YouTube search results are loaded Straight into the YouTube client.

The Search in YouTube/Browser feature is great; we didn't see any analog of it in other phones

In addition to the the gradual typing for searching a specific song, there is an alphabetical slider now, which appears on the right side of the tracks list.

There are still some shortcomings of the music player that need addressing, though. There are no equalizer presets yet nor any alternative visualizations. Another letdown concerning the music capabilities of the Magic is that there is no standard 3.5mm audio jack or at least a miniUSB to 3.5mm adapter in the retail package.

The HTC Magic audio output is decent but not great by any means. The noise level dynamic range and stereo crosstalk are the strong points of its performance but the rest of the readings are somewhat below-par.

It has cut-off bass frequencies, probably due to some kind of high-pass filter meant to improve sound on small size headphones. The distortion levels are acceptable but if you compare them to the iPhone 3GS they are several times higher.

So if you are the audiophile type that can tell the difference between a CD and a vinyl record in favor of the latter - don't bother turning the music player on. The rest of you will probably be fine with it. And here go the results so you can see for yourselves. 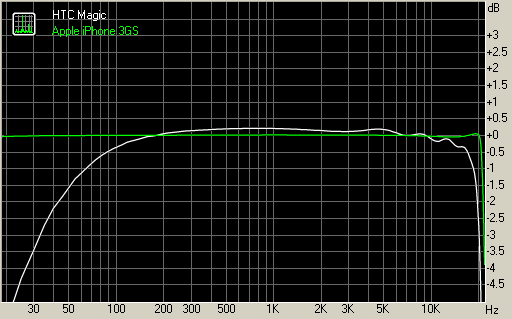 Please I need help on how to upload my pictures from my htc magic to my Facebook.

Please I need help on how to upload pictures from my htc magic to Facebook.