HTC One M9 review: One up

The HTC One M9 is finally taking imaging seriously. With a brand new 20MP BSI sensor, HTC has opted out of the dual-camera setup and there is no OIS here. The camera uses as a 27.8 mm wide angle lens with an aperture of f/2.2 and a sapphire lens cover. The sensor size is 1/2.3" and the maximum resolution is 5376 x 3752 pixels. Although it isn't officially cited in the specs sheet, the 10:7 aspect native aspect squarely points towards a Toshiba sensor. 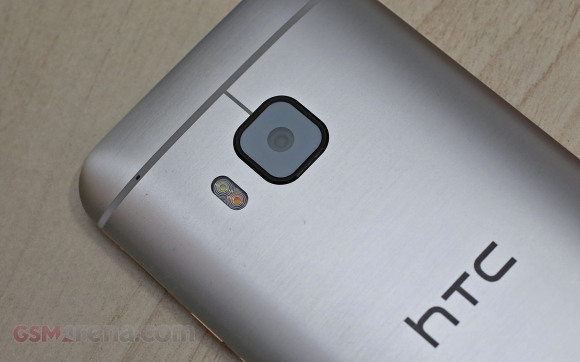 The camera lens does not offer optical image stabilization, which according to HTC is mostly due to lack of physical space inside the device, as well as quality control issues, meaning it's hard to mass produce up to high standards.

The shooter's interface seems to be absolutely identical to the one in the One (M8), which is in no way a complaint, as it has already proven its worth. Your choice of shooting modes includes: Selfie, Camera, Panorama. You can add more shooting modes though - the available options are Bokeh, Photo Booth (4 snaps in a grid) and Split Capture (dual-camera capture).

The One M9 is also capable of taking HDR stills, macro shots, there is Night mode, and even Manual mode is available. There are also settings for maximum ISO, exposure compensation, white balance and image adjustments.

A long press on the screen will lock exposure and focus. You can set the volume rocker to act as a zoom lever or a shutter key.

The front-facing shooter is a very impressive HTC 4MP UltraPixel module. It is very similar to the main camera of the One (M8), but it doesn't have auto focus. It also comes with a BSI sensor, an aperture of f/2.0, a 26.8mm wide-angle lens and is capable of 1080p video recording.

The new 20MP main camera produces nice-looking photos, there is enough detail, but there is lots of luminance noise too. It seems HTC chose not to tune the noise levels down in order to keep as much detail as possible and we can live with that. In good light the photos are really sharp. We are more than pleased with the way the camera picks exposure and colors, even in mixed light. White balance is on spot, too.

Outside of the high noise levels, the less than stellar dynamic range is what bugs about the HTC One M9 camera.

While the images aren't as spectacular as we've expected, the results came out better than other 20MP shooters, say Xperia Z3, and are a huge improvement over the 4MP UltraPixel samples taken with the previous HTC One (M8) model.

And here is great macro sample taken with the HTC One M9.

The HTC One M9 is well capable of shooting HDR stills and the results are OK. It gets lots of detail out of the shadows, but the highlights might get overblown. Unlike the previous generations of HTC Ones, this time around HTC tuned the algorithm and we often got some pleasing high-detail photos, which is definitely an improvement.

We also snapped some low-light samples.

The panorama resolution has been improved - now it shoots at 1850px in portrait mode and 1080px if you are using landscape view. The images are OK, stitching is very good, but the resolved detail is far from great. Still, it's another improvement over the One M8 and we appreciate it.

You can also check the 4MP UltraPixel samples taken with the front selfie camera.

The HTC One M9 has a really nice camera. It does resolve plenty of detail, the colors are accurate, and contrast is great too. The luminance noise is the only thing, which might get in the way of the perfect picture.

HTC One M9 in our photo compare tool

The video recording is no longer a dedicated mode, but has its own button in the camera interface. While convenient, this unfortunately, makes framing a video correctly impossible unitl you have started recording. This genuinely annoying issue has to do with the fact that the still camera and the video camera have seriously different fields of view (they don't fit the same portion of the scene) and you only get to see the video field of view after you've started recording.

The 4K videos from the main camera have a 41.9Mbps bitrate and the audio is recorded in stereo with a bitrate of 96kbps. The 1080p videos have a bitrate of 20Mbps, while their audio stream is at 192Kbps bitrate.

The 4K video quality is the same as the still images - there is lots of resolved detail, there is noise too. Colors and contrast are great, as is the while balance. The dynamic range seems a bit lower though.

The 1080p videos at 30 fps seems blurred, while those shot at 60fps are oversharpened. We like the latter better, but HTC has some work to do on both modes.

The HTC One M9 fares quite well when compared to identically priced 4K shooters, as you can see in our Video comparison tool. Unfortunately, that's only true for the 4K videos, the 1080p came out really poor.

HTC One M9 (4K) in our video compare tool

I am using HTC M-8 since 2016 and so far it is giving the excellent performance except for . . the average Battery time. Rest, its quite user friendly, robust. Keeping in view M-8s performance, I purchase M-9 and for good about 2 years it never ...

I tried to connect my HTC one m9 to my smart phone but it doesnt work. My question is tha phone can conbect to tvies or not