Huge is the new big

The main view of the Pictures hub offers four options - camera roll, albums, date and people. A swipe to the left reveals what's new, which displays your Facebook friends and liked pages' new picture galleries. Another swipe shows your favorites section, where the photos you've faved are displayed and finally applications, where on the HTC Titan you'll find the Photo Enhancer app.

Albums features the camera roll, the preloaded system pictures and all of your Facebook albums. A flick to the left shows all your pictures sorted by date. You can't assign individual camera roll photos into albums, though.

The video player doesn’t recognize .AVI files – in other words, don’t expect DivX or XviD support. However, the Zune software on your computer will automatically convert such files to .MP4 – so, you can watch those formats on the HTC Titan, it’s just that the transfer to the device can take quite a while (depending on your computer's capabilities).

Unfortunately, the HTC Titan didn't manage to impress us with its audio output. The smartphone wasn't terrible in the "active external amplifier" case, but it wasn't perfect either and its performance with headphones on was downright mediocre.

With the headphones out of the equation, the Titan had near perfect frequency response, great noise levels and dynamic range and little total harmonic distortion. The intermodulation distortion was higher than average though and so was the stereo crosstalk. Volume levels were among the highest we have seen.

The results in the second test were far less impressive. Volume remained higher than average, but noise levels and dynamic range readings took a hit, while intermodulation distortion and stereo crosstalk spiked. It all adds up to a performance that you won't be writing home about. 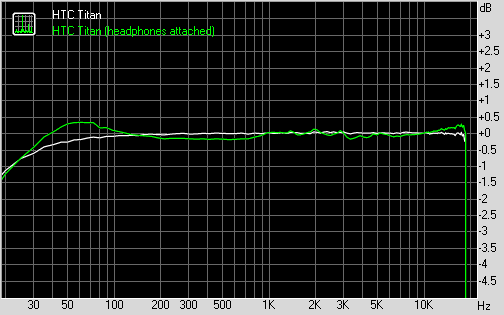 I appreciate being able to go back and read these reviews. How much has changed in 6 years.. It is a shame Windows Phone ended the way it did.

I don't know how to use its Bluetooth since I can't transfer music from other phone going to HTC titan.