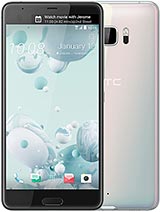 I'm no LG fan, actually I would never buy one, but damn! HTC is such a lame copycat!
And I used to be a big HTC fan! Just die already HTC! U suck!
Now I'm in team Sony and I have to say it is waaaay better than those copycats..
I'm not trolling, I'm just pointing to the truth.

When S7 and V20 married had a son, that is HTC U Ultra

Xiaomi Mi Note 2 or Xiaomi Mi 5s Plus
This phones folds into HTC U
Apparently HTC does not want to make money.

I have owned HTC phones for the past 7 years... but I am disappointed in the current flagship. The U Ultra seems to be a Flagship for 2016... No AMOLED Display, No Snapdragon 835 and a 3000mAH battery.. I was too eager about the HTC Ocean concept.. but this new AI gimmick does not seem to be that path breaking.. I need to switch my device but the U Ultra does not seem to be very convincing.. The phone is just not feature rich enough to justify a 749$ price tag...

Sapphire edition will be released later this year but by then, every competition would have released their flagship models bearing the snapdragon 835. And even LG is reportedly hopping on the waterproof bandwagon for G6.

come on HTC...you took away your best part 'front facing speakers' why did you do that!?? and this phone look like Samsung phonefrom the back if you didnt put the HTC logo on...im disappotined.

OMG what happened to the battery? with that resolution and secondary display. Not so "ultra" after all...

Let us hope HTC will bring something amazing this year! 3 flagships a year sounds interesting. I hope at least one of them will have IP rating. HTC flagships lacks this feature.
I also hope this one will not be that huge. A 160-162 mm length is very big. Companies should watch what Xiaomi did last year with the Mi Mix.

Okay HTC judging from the rumours(Will update if any of my information is wrong due to official press), this is not shaping up as well as I hoped it to be.

1.No Headphone jack, but somewhat excusable because they have exceptional audio.

2. Design and features seemed to be copy and pasted onto this "Ultra" phone. AHEM the secondary screen that totally does not scream the V Series from LG, the back that doesn't look like a modern Samsung phone, and they have the confidence to just slap the HTC logo and call it theirs. This is more subjective, but HTC was a innovator of the android market back then, and now they are stealing designs from the copycats themselves!

3. 4GB RAM. I mean that in itself is fine, but this is 2017. Apps are only going to be heavier, and even 4GB won't cut anymore. Only Apple can make that multi-tasking with 4GB work in 2017. With their competitors using 6-8GB of ram the first half of this year, HTC is shooting themselves in the foot. You may argue, 4GB is enough for you, but then why pay a pretty penny if you're not going to use your phone to its fullest? Just buy a damn cheap phone then lmao.

4. More of a personal complaint, but 6.0" screen. Maybe 5.7", but might as well have a mini-tablet. The battery would've been impressive for a 5.7", but judging from the screen's enormous size and its QHD screen, it'll be a hour over average at best.

I'd rather pay for an LG V20 for a powerhouse than this phone. But who knows, rumours are rumours and we will have to wait until Thursday.

please let this be true. i'm sooo ready to upgrade from my HTC one max.
all this needs to be bring back the font facing speakers.

Ppi and 6inch not compared for 4000battery lose about 3hours

Very bad if only 4gb RAM, even 6gb version not. Already 1-2mistake there is. Samsung will produce 6gb, 8gb ram note8..

Phone seems to have a great build quality and specs, but only if it had a 3.5 millimeter headphone Jack.