The HTC Vive Cosmos was released a month ago but it only now enters the European market and we had the chance to play around with it. 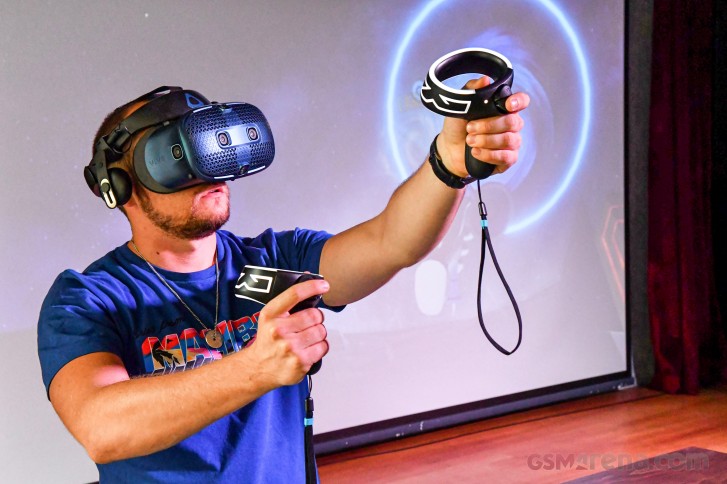 The Vive Cosmos is a direct successor to the original Vive and aims to be the flagship device for the company. It's a significant upgrade over its predecessor - in terms of design and hardware. And it's different from the HTC Vive Eye introduced a few months ago.

Let's start with the specs. The Cosmos features an impressive 1440 x 1700px resolution per screen with a combined resolution of 2800 x 1700px making it the VR headset with the highest resolution for commercial use. Each screen is 3.4" in diagonal and uses RGB displays that should limit the screen-door effect.

It uses red, green and blue LEDs for the backlight as opposed to the white-only LEDs in conventional LCD panels. This also improves color accuracy, contrast and brightness despite that they are costlier and harder to manufacture.

The screens also refresh at 90Hz for smooth gameplay, but that means you'd need a lot of horsepower to power up all those pixels at 90 frames per second. Of course, it depends on the game and HTC says it will run on rather old PCs if you stick to less demanding titles or quality settings. 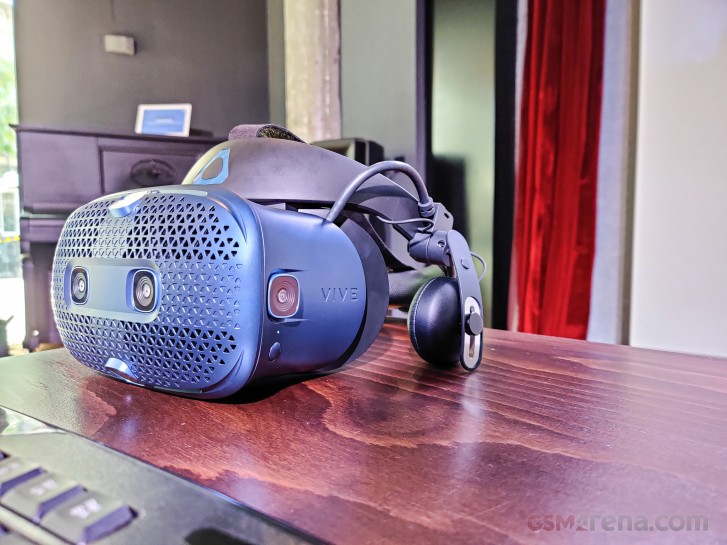 For tracking, the Vive Cosmos now uses internal tracking meaning the external pylons are no longer needed. Much like most Microsoft mixed reality headsets, the Vive Cosmos relies on cameras responsible for the tracking of the environment and the controllers.

The Cosmos comes with six cameras aided by the usual G-sensor and gyroscope. The controllers are LED-illuminated to help the headset with the tracking in dark environments. The controllers have their built-in sensors too - gyro and G as well as hall and touch. All is powered by two AA batteries per controller.

HTC is really proud of its revised design over the original Vive and with good reason. Sure, the headset is a bit heavy but that was to be expected since it has internal tracking. It has a flip visor so you can step in and out of the virtual world on the fly and more importantly, it feels quite spacious in there. Users with glasses will be pleased to learn that HTC has taken this into account while designing it.

Moreover, the front end of the band is now slightly inclined so it rests on your forehead instead of strapping it around your head. This greatly reduces fatigue when wearing it for hours straight as we managed to confirm. This with this design, you don't feel the weight of the headset as much. 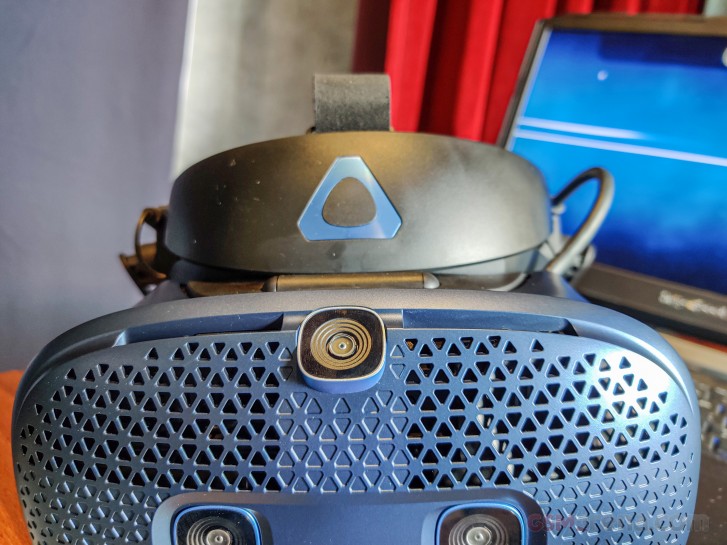 Also, current VR owners would probably relate - when in a game that requires a lot of body movement, you get pretty sweaty and so does the padding on the headset. Vive has tackled this issue by placing removable and washable pads so you can wash them after a couple of sessions.

As far as controllers are concerned, though, we felt that they need some improving. They felt a bit weird in the hand at first and require some getting used to. They are also a bit on the heavy side. The grip is rather short and users with bigger hands might have a hard time keeping all their fingers on the device.

Even though some slight improvements are needed, the controllers are still perfectly fine for most use cases and we are mostly nit-picking.

The best part is that the headset is modular. It works with a couple of accessories from the Vive lineup so you can remove the headphones, for example, and slap a pair of your own. You can also turn it into the original Vive by swapping the front of the headset with a module with IR sensors instead of cameras. This would allow you to use the old pylons for external tracking and will work with all the legacy accessories released before the Vive Cosmos. 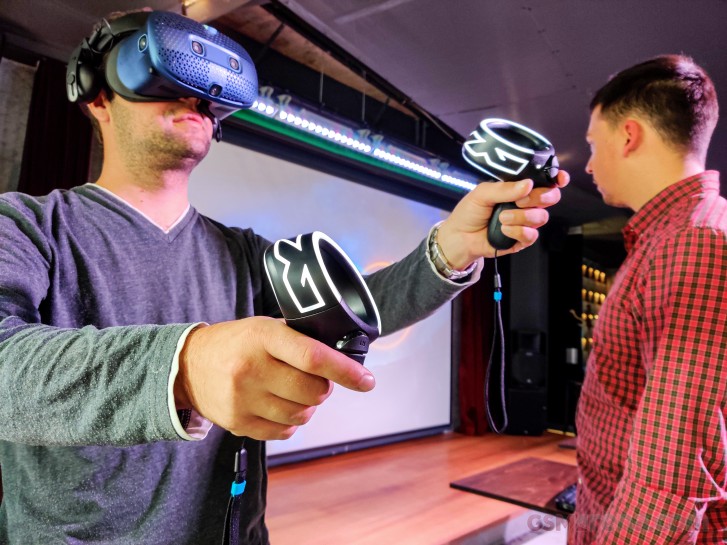 HTC also co-developed a wireless adapter with Intel using the WiGig technology. This mod frees you from all the cables transferring data wirelessly at 60GHz. Of course, this would add more grams to the already heavy headset but at least you won't have to worry about cables. Speaking of, they are pretty long, so you get plenty of room for movement.

So how it felt? Well, it's by far the best VR experience we've had so far. That's how a flagship VR headset should feel and it delivers.

The controllers felt hefty at first but once you get used to them, you won't mind. You can only draw comparison if you used other VR headsets. The actual headset was also a bit on the heavy side, as we already mentioned, but the new band design made all the difference as it rests on the top of your forehead instead of squeezing your head.

The displays, on the other hand, felt awesome and we can't find anything to complain about. They are by far the best we've tried. The extra pixels and the RGB LED LCD panels make a huge difference - the screen-door effect was hardly noticeable, especially while you are trying to shoot some stuff in the game. The expanded field of view is also largely appreciated ensuring an immersive gaming experience.

In terms of tracking, it was more than okay. If it's really dark, the system can get confused. We were in a moderately dark environment, however, and the system lost track of one of our controllers once or twice but came back on real quick. We can see how this could be an issue over time but that's inherent to inside-out tracking systems. 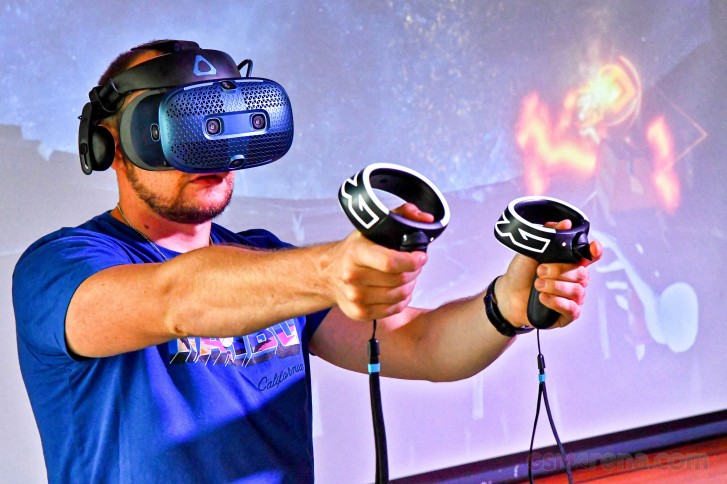 One of the things that HTC highlighted is the so-called Vive Lens - an overlay menu letting you switch between apps and games on the go as well as tweak some settings. And it gives you access to Viveport (HTC's own library of games and VR-related apps).

Speaking of, if you buy the headset now, you will get six months free trial of the Viveport Infinity, which is a subscription-based service for VR games and apps. The offer is available in Europe.

The strongest argument against buying the HTC Vive Cosmos is its price. We've come to a point where you can buy PC for a little less than what HTC is asking for the headset. And the inside-out tracking system that the Vive Cosmos offers is pretty much on par with the competition - it's no better nor worse in this regard.

However, the strong points like the modular nature of the headset and the amazing displays make it an easy recommendation. The competition simply has no answer for those. Then again, going for the accessories will make the Vive Cosmos even more expensive than it really is. After all, the standard price is €829 and adding the Wireless Adapter, for example, which is arguably the best accessory for the headset, will add €345 more.

Funny how this article points the flaws of the Cosmos (controller and tracking issues) but it's all good and ok nonetheless. Sounds quite objective !

There is nothing funny about. I find my self often hitting the things i cant know or there is no way i should ever realize as true but it is same like yours. Lonng time ago was working as a cashier at tesco and some old lady forgot her pin cod...

Funny. My name is Mohamed and I nearly did go the path of monk.