The Huawei Ascend Mate7 is the company's first phablet ready for primetime, with two credible midrangers in the Mate series giving Huawei the confidence to stand up to rival flagships. Never mind the digit in the title, the Mate7 is actually a 6" device with premium looks, solid display and a capable chipset. It was built to stand out, outlast and outperform the competition and looks keen to muscle its way to the top instead of sneakily undercutting the competition.

The Ascend Mate7 is trying to impress in pretty much every aspect. Its body is made of aluminum, but the focus is well on the 6" IPS display of 1080p resolution. Huawei's very own Kirin 925 chipset is powering the Mate7, which offers all-round connectivity options and a capable 13MP snapper. 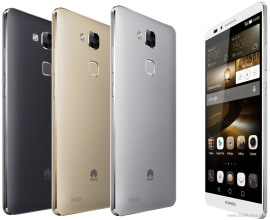 Huawei maybe a novice in fingerprint security, at least on paper, but comes across as a quick learner - to say the least. Huawei's implementation are superior to some of the popular solutions on other handhelds by major manufacturers. The phablet comes with built-in and easy to access scanner, which is fast and secure enough, offering touch&pay via NFC.

And before we proceed with exploring the complete feature set there is no way we miss mentioning the massive 4,100mAh battery hidden inside the Mate7. Huawei promises incredible battery times and you bet we'll test these claims with the dedicated Ultra Power Saving mode off.

What's up with companies and storage/RAM options? Just like the LG G3, the Huawei Ascend Mate7 comes with 2GB of RAM on its 16GB version and 3GB RAM with the 32GB model. One possible explanation is Huawei is trying to be competitive in two different price brackets. Fair enough, as long as users don't have to chase after the right box. And it is beyond us why Huawei decided not to implement more advanced video recording modes, having upgraded the camera sensor and the chipset.

Still, the aluminum unibody with a smaller footprint than the iPhone 6 Plus and the huge battery behind the massive 6" display are likely to let the Huawei Ascend Mate7 start strong. So let's get right down to it - we'll hopefully have our questions answered as the review unfolds.

My Sim two its not reading

DO NOT BUY IT I bought it on 2015, Screen had some minor issues that after i started turning it on, Shop said must go to warranty, even though it just comes out of the box. So saved the hassle and lived with it. Now Battery is draining like crazy...