The Huawei Ascend P7 is the sequel to the ultra-thin P6, the phone that proved, beyond any doubt, Huawei's ability to create visually appealing handsets. The new model builds on the original with a 5" 1080p screen, superior camera and chipset, plus a number of other improvements. 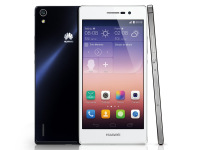 The defining feature of the Ascend P6 was the 6.2mm thin body (touted as "the thinnest smartphone") and a faux metal back. The new Ascend P7 can claim neither of those things as it's thicker (7.1mm) and has a glass-covered back. But what a double textured finish indeed! One to fall in love with!

There is metal framing, and the whole thing is sandwiched between two layers of Gorilla Glass 3 - especially welcome on the front, where the new 5" IPS screen of 1080p resolution is well worth protecting. Even without having the P6 and P7 side by side, we instantly appreciated the extra clarity afforded by the higher pixel density.

Enough teasing the new specs, here are the other ups (and downs) of the Huawei Ascend P7.

The Ascend P7 takes photography seriously, especially selfies. The front-facing camera has an 8MP BSI sensor and features modes like face enhancement and selfie panorama. The camera on the back is sourced from Sony and is a 13MP shooter with 1080p video capture.

Huawei has also popped in a new chipset that brings more processing power and LTE support. Another plus is that the company claims to have fixed the overheating issues thanks to a more advanced manufacturing process. The phone comes with Android 4.4.2 KitKat with the most recent Emotion UI, while its P6 predecessor is still on Android 4.2.2 Jelly Bean.

Huawei Ascend P7 at ours

The new chipset is still based on Cortex-A9, which is normally a notch below Qualcomm's Krait-based offerings, never mind the higher clock speed in the P7. Having seen the four Cortex-A7s do well enough in the Moto G though, we shouldn't be quick to judge on core architecture alone.

Follow us through the next pages where we explore the Huawei Ascend P7 in detail.