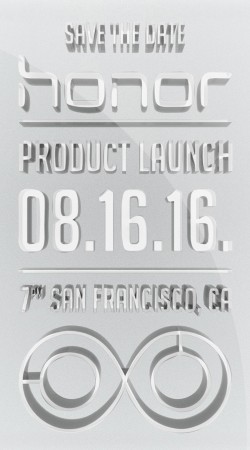 Huawei's Honor 8 was unveiled in China just a few days ago as the most high-end device ever from this sub-brand. It's basically got most of the specs of the Huawei P9, but sports a different design (with glass used on the back instead of metal) and an older chipset with a lower-clocked CPU. All of these things are paired with Honor's well known value for money proposition, so the smartphone is certainly very promising.

Now if you were wondering when to expect the Honor 8 to make it to markets other than China, here's your answer. Huawei is sending press invites (like the one you can see on the left) for an event taking place on August 16 in San Francisco, California. This is when the Honor 8 will become official for the US market.

Although the phone isn't named in the invite, that dual camera symbol that kind of looks like infinity (which you can see at the bottom end of the image) has been used by Huawei before to convey how proud it is of its dual camera setups. And since the Honor 8 is the only Honor device to feature such an arrangement... it's clear that this is the handset that will have the spotlight on August 16.

Huawei will sell the Honor 8 unlocked, of course. Pricing for the US is still a mystery. Even though it starts at $298 in China, it's pretty unlikely that it will get the same price in the US. Perhaps something nearer to $350 is to be expected.

When its gonna launch in india???

This phone is really perfect.Although it's rather cheap, it has a lot of options.

This phone should really be in every single country in this world. We all need it.