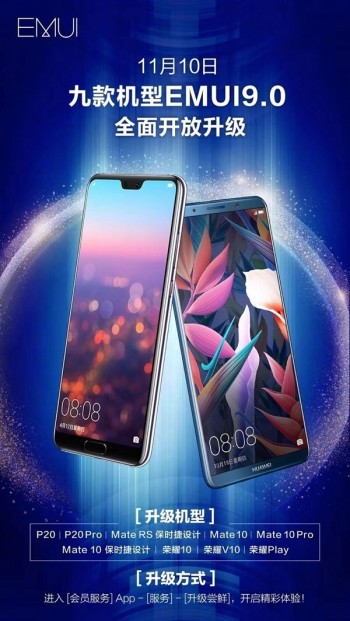 Huawei introduced EMUI 9.0 key features behind closed doors at IFA Berlin and made the interface official with the launch of the Huawei Mate 20 phones. The beta program for the UI, based on Android Pie, began on October 17, and today November 10 was revealed as the global launch date for nine Kirin 970-powered phones.

Richard Yu, CEO of Huawei, took it to Weibo to announce the date for the rollout. According to Chinese sources, the update will be pushed worldwide to all owners of six Huawei phones and three more, operating under the Honor brand. Here’s the full list:

The new Emotion user interface is based on Android Pie and brings better system response time and better smoothness. There is also GPU Turbo 2.0 that focuses on extreme scenarios to push even further optimization for mobile gaming. Since EMUI is based on the latest OS by Google, it will also have Adaptive Battery and Screen and Android Dashboard that monitors screen usage.

P20 Pro (CLT-L29) unlocked in the US. I have received no updates since the Oct 1 security patch. HUAWEI is by far the worst Company at keeping their phones updated, even more so than Samsung which I thought impossible. To make matters even more bizar...