Huawei Mate 10 and Mate 10 Pro – the second one is clearly better, right? It says so right in the name! But if the main difference between these two is in the screen, then how come the Pro screen isn’t clearly better?

The Pro model packs AMOLED while the base Mate 10 uses LCD. This brings much a higher contrast ratio and better colors – while both displays support HDR10, the AMOLED boasts 112% NTSC coverage while the LCD only goes up to 96%. And the Pro model has an 18:9 screen, keeping with current trends.

But it’s this aspect ratio that skews the numbers. Despite having a 6” diagonal, the Mate 10 Pro screen has a surface area of 92.9cm². The 5.9” screen of the base model is actually larger at 95.6cm².

To be fair, the 2016 Pro model had a smaller screen too, making the phone more compact. But that’s not quite the case here – the “plain” Mate 10 has a better screen to body ratio than the Pro model.

Admittedly, it’s 81.79% vs. 81.61%, a difference so small you might as well not mention it. Except most 18:9 screens out now are marketed on the basis of their thin bezels. The plain model even has room for a fingerprint reader on the front! 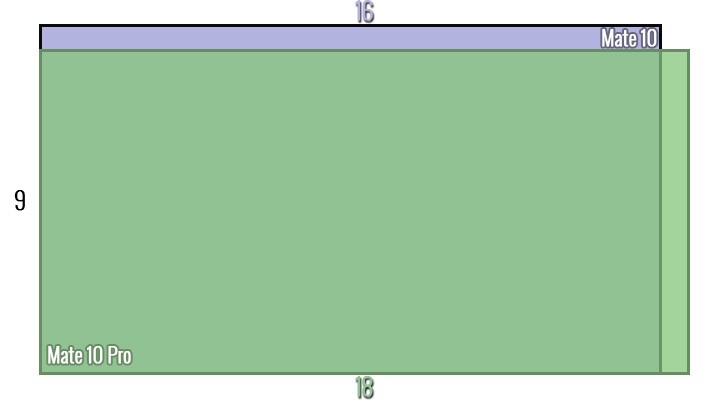 We’re not done yet – in the Mate 9 generation, the Pro model clearly had the sharper screen. In this generation the roles are reversed.

To recap, the €700 Huawei Mate 10 has a bigger, sharper screen with smaller bezels than the screen of the €800 Mate 10 Pro. Sure, we have a tendency to prefer AMOLED over LCD, but that is if all else is equal. In this case it isn’t.

And don’t get us started on the lack of a 3.5mm headphone jack on the Pro model (the non-Pro has one). Same goes for a microSD slot.

Keep in mind that screen aside, these two use the same cameras and chipset. The Mate 10 Pro does have more RAM and storage, 6GB/128GB vs. 4GB/64GB, but that feels like an artificial restriction by Huawei. The IP67 dust and water resistance of the Pro model is a nice perk, though.

You could argue that more memory is worth the €100 upgrade. Apple or Samsung will charge you that much even without improving the elemental resistance. But that screen... it makes the math harder.

Just for the record, the side bezels of the basic Mate 10 is thinner than Mate 10 pro. compared side by side when swirched on, the Mate 10 pro has a very obvious black side bezels unlike the plain Mate 10 where it has a true edge to edge display.

Is that the reason why Mate 10 has no Always On Display? Bummer.