In a world where pretty much every smartphone has a tall notched display, it's not easy for the Mate 20 lite to stand out. Reasonably thin sides, slightly meatier chin and the horns on top - they don't make them any more standard than that, but it's not really Huawei to blame. 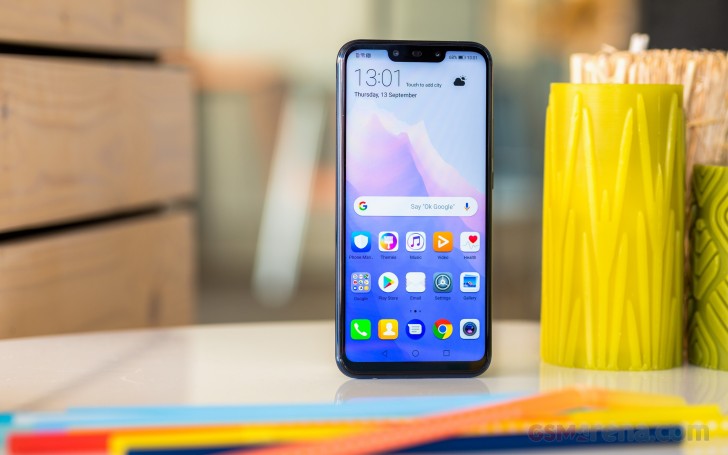 There is, perhaps, a bit of an unusual symmetry to the Mate 20 lite's notch, courtesy of the two cameras, one on each side of the earpiece. While waiting for the Pixel 3 XL, this Mate 20 lite remains the only phone with such an arrangement (alright, and a couple of other Huaweis, too). 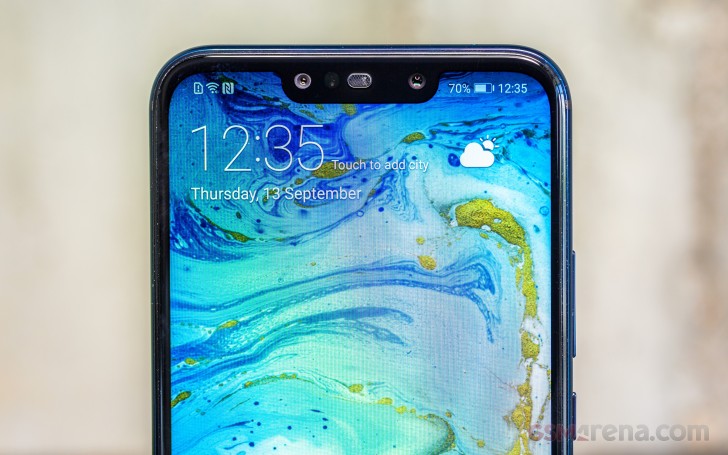 The tiny earpiece mesh also hides an LED notification/status light, while the ambient light and proximity sensors are to the left. 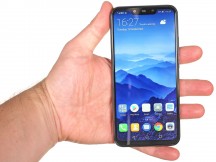 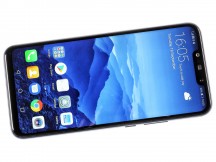 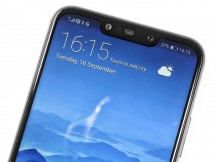 In the hand • A face like any other • Well, not quite

It's on the back, where the Mate 20 lite shows a lot more character. We're especially loving the Sapphire Blue color scheme that we're lucky to have on our review unit that plays all kinds of tricks with light. 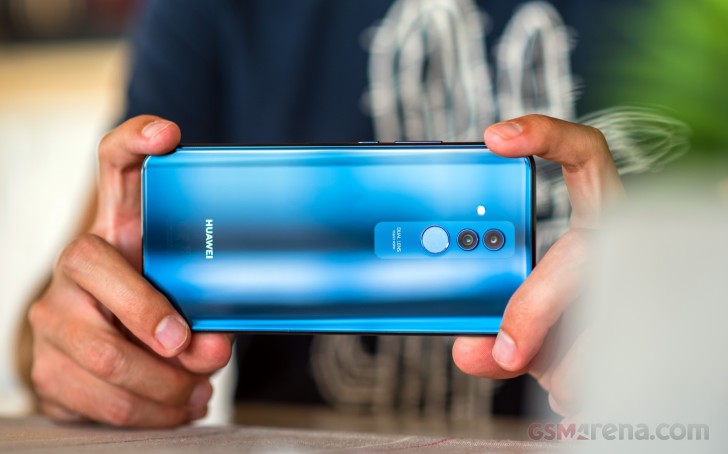 It's a glass back, just like the Mate 10 generation, and we mean the proper Mate 10s - the 10 Lite had aluminum on its back. Inspired by the Mate 10s is also the accent strip that lines the camera due and the fingerprint sensor - sure, it was horizontal on last year's flagships, but the resemblance is there. 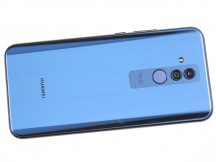 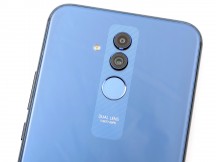 Glass back • Dual camera and fingerprint sensor along the central axis

The camera modules stick out quite a bit and have a somewhat sharpish feel to their edges, but also a nice technical look. Huawei has shown restraint with the text and only slapped a 'Dual lens' inscription plus the main specs of the primary camera's lens. We remember complaining about the P20 Pro's camera's specsheet stamped on its back, though there is, admittedly, a lot more to boast about on the flagship than there is with this modest setup. 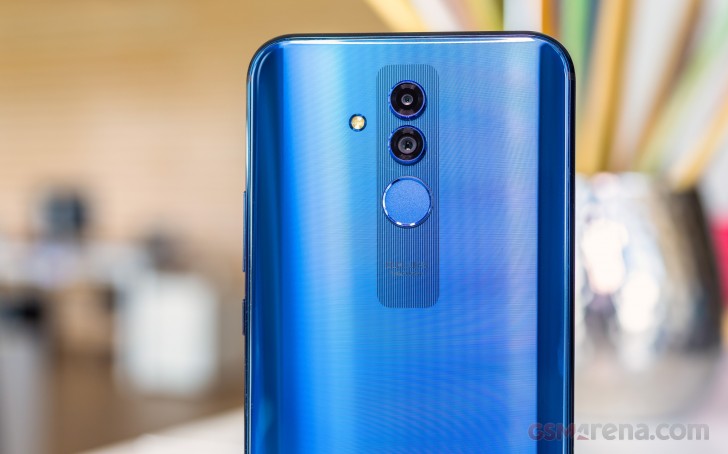 Huawei doesn't specify whether it's Gorilla Glass or another type of hardened glass, which we suspect it has to be. In any case it's pretty prone to accumulating fingerprints, but that's par for the course with glass-backed phones (unless you do something crazy like OnePlus and make a matte glass handset). There's no waterproofing, at least not IP-rated. 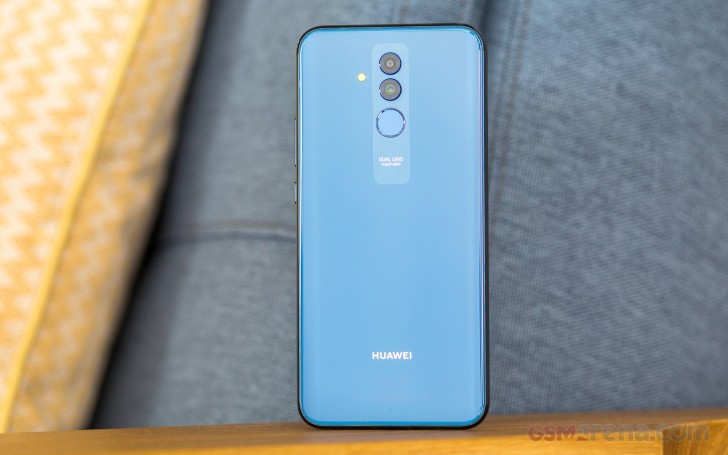 The rounded aluminum frame feels especially nice in the hand and thanks to the glossy finish has an almost iPhone X look. Almost. 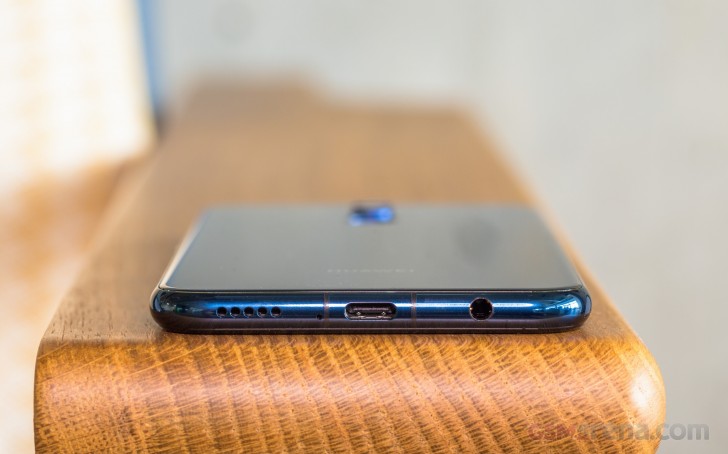 The power button is on the right side of the frame, just above the midpoint, with the volume rocker above it. The buttons aren't huge, but aren't too small to pose a problem and we find them well positioned.

The card slot is on the left side, and our review unit, being a dual SIM variant, takes either two nano SIMs or a nano SIM and microSD card. Single SIM variants will obviously only work with one SIM and a microSD.

On the bottom you'll find the USB-C port in the middle - no more microUSB nonsense like on the Mate 10 Lite. Immediately to its right is the primary mic while the loudspeaker is behind a grille further to the right. The 3.5mm jack is on the opposite side. Up top there's a single pinhole for another mic. 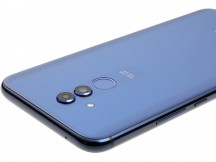 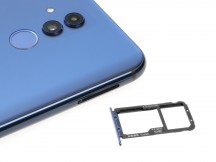 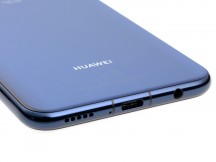 The Mate 20 lite measures 158.3x75.3x7.6mm, which is about what you could expect for a phone with a display this size. The Honor Play is 0.4mm shorter and a full millimeter narrower, but it's a really negligible difference.

The Mate 20 lite is, however, remarkably thin and light, particularly when you take into account its 3,750mAh battery. It's quite the pleasant surprise when you take it in your hands for the first time.

Some may say that weight alone makes a phone feel more premium and there might be some weight to that claim (a-ha!), but it's nice not having to carry more grams than necessary. 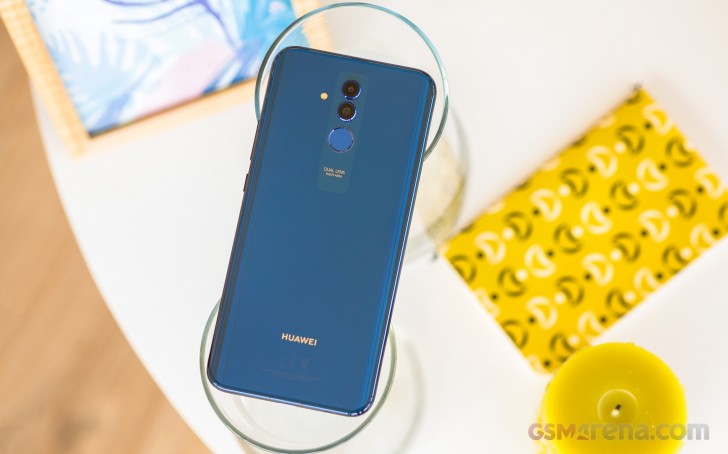 Mate 20 has poor camera.Moto is a no buy at any standards.iPhone 7 and Huawei P10 are amazing.But for price,P10 is around 280$ and iPhone 7 is still rocking 500$ mark.If you find ip7 for a cheap price i would definetly go for it.Otherwise P10 makes a...