The Huawei Mate 20 X looks a lot like a stretched version of the Mate 20, and that's a pretty accurate description. The Mate 20 X has the same design, despite the size difference. It's a dual-glass phone with a metal frame in-between - and that's as modern as it can get today.

But size does matter in this case, and the Mate 20 X is betting on this big time, obviously. The whole front is one giant AMOLED screen, 7.2" in diagonal. The panel has rounded corners that match the curves of the frame, and the bezels are minimal with the biggest one being the chin.

The waterdrop-like notch is here at the top of the screen. The Mate 20 X has the same 24MP shooter with a fixed-focus f/2.0 lens as the other Mate 20 phones. 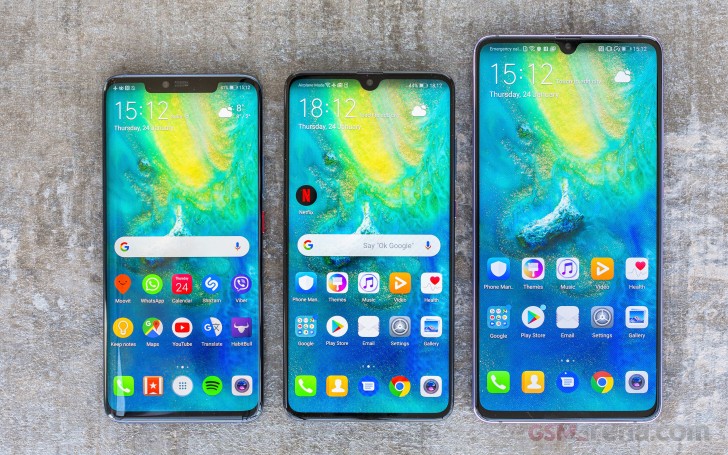 Just above the notch is one very tiny earpiece grille, but unlike the other Mate phones, the one on the Mate 20 X doesn't act as a second speaker. Instead, the X has two large and loud Dolby-powered speakers mounted symmetrically on its top and bottom sides, and they make for an outstanding listening experience. But more on that later. 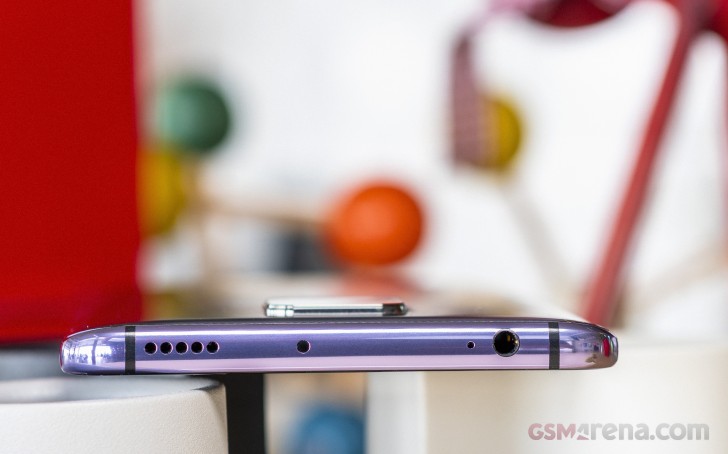 The Mate 20 X, unfortunately, lacks a notification LED light. The only way to be in sync with your notifications is to enable the always-on display option, but that will take a huge toll on the battery life. 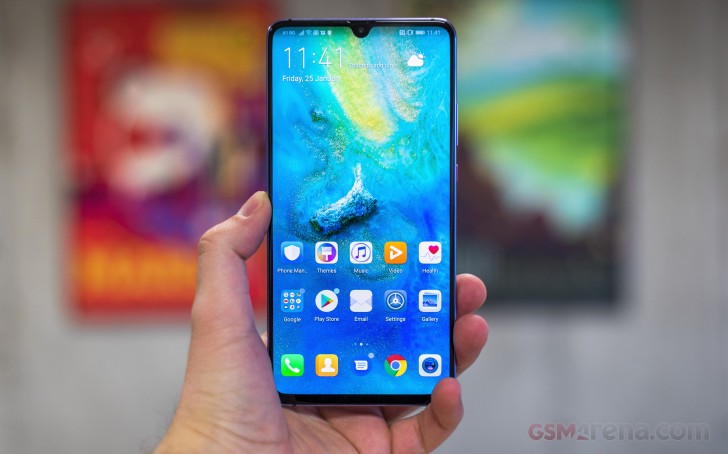 And before we move on to some other important parts, we should mention the pressure-sensitive screen of the Mate 20 X, which can register up to 4,096 levels of pressure. It supports the exclusive M-Pen for Mate 20 X (not to be mistaken with the M-Pen for MediaPad), but the stylus is not included in the retail bundle. And even if you buy it, there is no special place to dock the pen, so you'd have to carry it in a pocket or purse. At least you can charge the M-Pen with the Mate's charger and cable.

The Mate 20 X has a bit thicker metal frame than the rest of the Mates, and while it's still glossy and curved towards the front and back, that's the only major grip booster you will get. And it does a rather good job of keeping the phone secure between your fingers. The top part of the frame has the audio jack, the IR blaster, and one of the speakers, while the bottom part has the USB-C port, the mic, and the other speaker. The Mate 20 X has the same hybrid SIM slot as the other Mates - a dual-nanoSIM tray, where you can swap the second SIM for one of Huawei's newly announced NM proprietary memory cards.

The SIM slot is secured with rubber sealing against dust and water, which is the only real evidence for the IP53 certification for dust and light splashes. The Mate 20 Pro is the only Huawei phablet so far to be fully water-proofed. 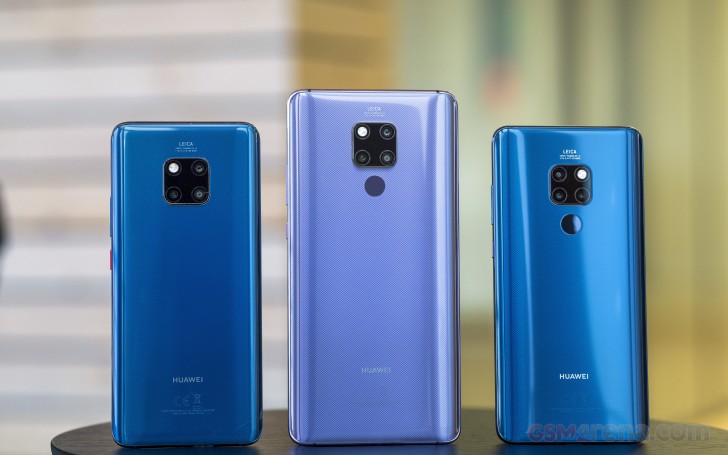 The so-called Hyperoptical backs of the Mate 20 and Mate 20 Pro quickly grew on us and we are happy to see the Mate 20 X uses the same rear panel. It's a glass piece, quite big in the X case, and its long edges are slightly curved towards the frame. The whole thing has this grippy vinyl-like texture, which not only looks brilliant but even sounds cool if you scratch it with your nail. 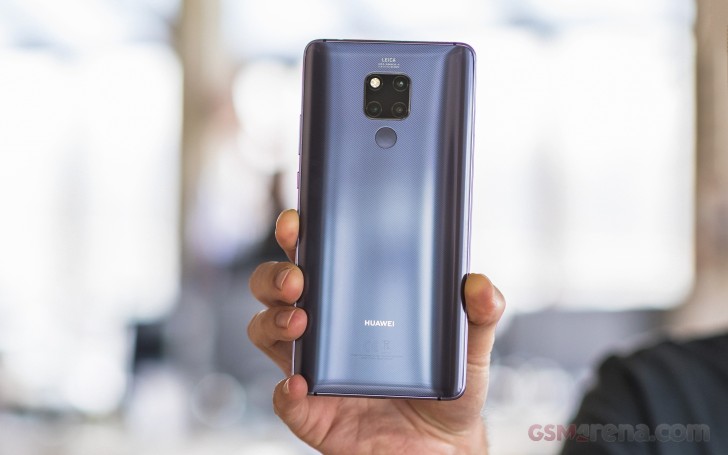 The signature square-shaped camera setup is on the back, naturally, and it is identical to the one on the Mate 20 Pro - meaning a 40MP regular, 20MP wide, and 8MP OIS telephoto snappers. The fourth opening is for the dual-LED dual-tone flash. 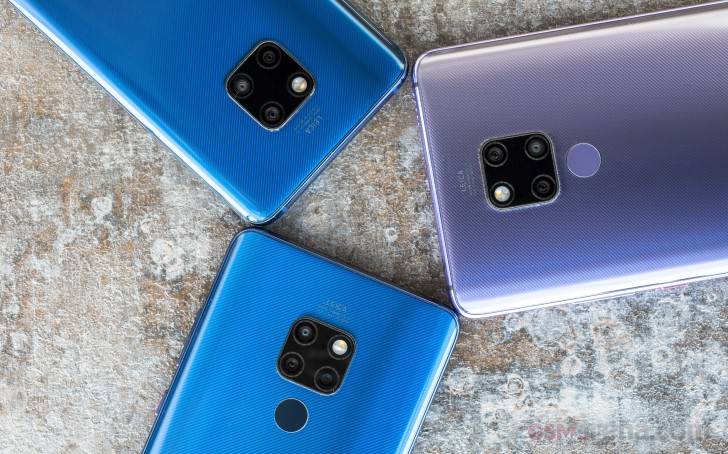 The signature camera shape is on all three Mate 20 phones

Even though the Mate 20 X is larger than the rest, it's still rather thin and thus the camera setup is humping a bit. But thanks to the large size of the phablet, it doesn't wobble at all when lying on a flat surface. 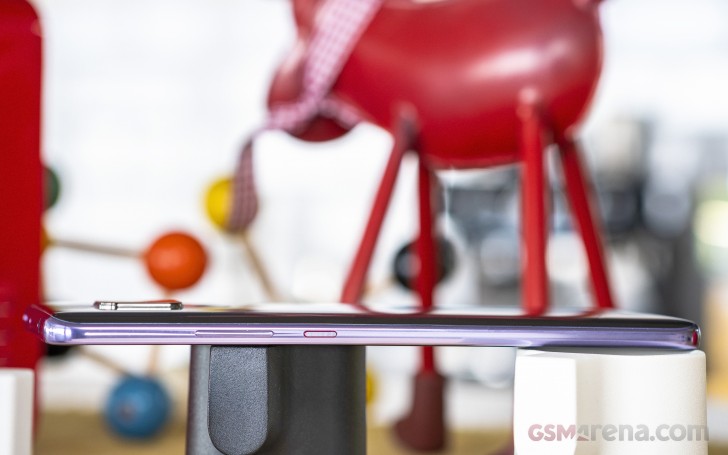 Finally, the Mate 20 X features an always-on fingerprint scanner and it's mounted below the triple-camera setup on the back.

We sure left the most interesting stuff for the end of this chapter. The Mate 20 X spreads at 174.6 x 85.4 x 8.2 mm - not your ordinary smartphone for sure. This is 16mm taller and 8mm wider than the Huawei Mate 20 Pro. But this footprint is also 2mm both shorter and narrower than the Xiaomi Mi Max 3 with a 6.9" display.

The Huawei Mate 20 X is not for everybody and that's 7.2" OLED screen should have given it away instantly. If you are after a compact smartphone, you are looking at the wrong place. The Mate 20 X tries to offer the maximum of screen estate by stretching the limits of the definition for a smartphone. 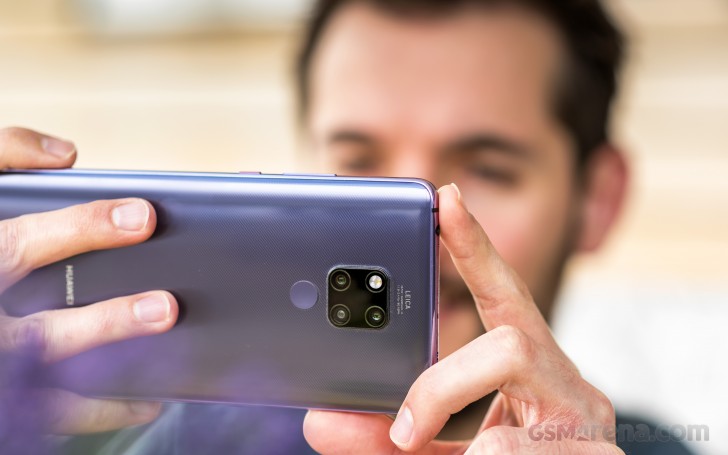 And it succeeds. The Mate 20 still fits in most jeans side pockets, and you won't have problems when sitting. The X will surely be more comfortable in a backpack or purse, but if you are perfectly fine with putting any 6.5" smartphone in your pocket, there is a fat chance you'd get used to the Mate 20 X in a flash. 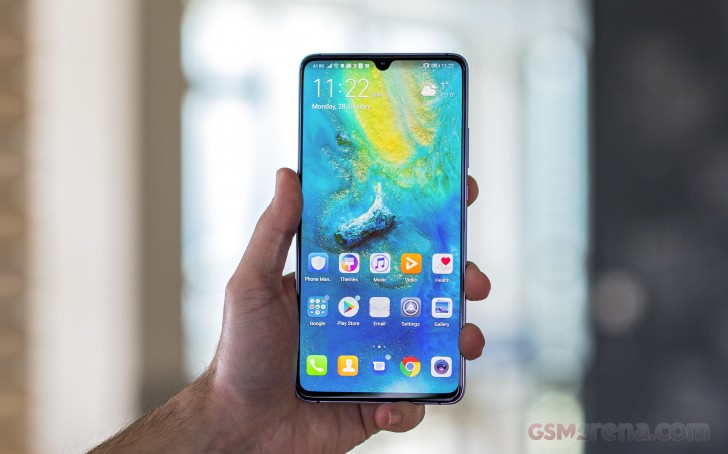 The Mate 20 X can be handled with one hand when necessary, the maker provides the necessary virtual controls for that. But most of the time you will need both of your hands, and that's no news for a 7.2" device, isn't it?

Mate 20 x fares the best in battery life, in the trio. The standby for mate 20 is not as good.

Wow how did you predict the Samsung model number 6 months before Samsung made an official announcement?

In Singapore, Huawei phone users can ask Huawei to replace a new battery at a few of SGD50. intend to use this 20 x till a better successor comes.