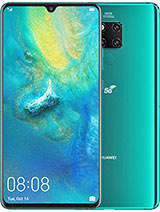 Anonymous, 21 May 2019First if huawei was to develop their own operating system i... moreI think you can download google apps in huawei's os (with some tweaks)
I'm exciting to see this new os coz I hate both android and ios I hope it comes to older huawei phones I don't want to get a new phone

Phone Reviewer, 20 May 2019The 5g modem in the phone. Whenever something new and aweso... moreThe modem doesn't take up any more space than a 4G LTE modem. So why would the battery need to be sacrificed? There's no reason behind it. And the headphone jack didn't need to be removed. I like Huawei and all but damn that's unnecessary.

MAGA, 21 May 2019Lol, Google does not need Huawei! Huawei needs google (goog... moreFirst if huawei was to develop their own operating system it would probably be based on open source android and thus will most likely be compatible with existing development so apps can be ran on both. As for apps that require google like maps and pay then a Huawei alternative will have to be made.

Second although Samsung's, Apples and Googles market share may increase there is a strong possibility that companies like OnePlus, Oppo and other Chinese manufacturers will benefit more from this.

Third Trump is no genius for blacklisting Huawei as its the obvious choice when it comes to Chinese tech companies to blacklist being the largest Chinese manufacturer of smart phones.

willcee, 20 May 2019no problem, Huawei will create its own, Google needs china... moreLol, Google does not need Huawei! Huawei needs google (google services is required to run many popular apps). Google has the Pixel phones. They have no need for huawei, in fact they're better off without Huawei since the pixel phone market share would only get larger. Trump is a genius for blacklisting huawei, he knows how to hit China where it hurts.

Anonymous, 19 May 2019Screen size doesn't matter, what matter is the dimension.You are exactly right. The whole phones size is almost the same size as Sony Xperia XA 2 Ultra.

willcee, 20 May 2019no problem, Huawei will create its own, Google needs china... moreAre you sure?please explain it.

Was really looking forward to this phone. Big screen, huge battery and they added 40W charging to this variant. This is almost perfect until US decided to kill Huawei.

1000 euros for an phone...! C'mon guys, this is going weird and more weird. Firstly, phones are getting longer and more longer. Secondly, the price is growing more and more, year after year. In my opinion, all brands should be BANNNN....

no problem, Huawei will create its own, Google needs china/asia more than china -asia needs google,

keep it up trump, u.s is now way behind . the future of tech belongs to china/asia,

Google pulls Huawei’s Android license, forcing it to use open source version
[...]Speaking to Reuters, a Google spokesperson confirmed that “Google Play and the security protections from Google Play Protect will continue to function on existing Huawei devices.” So while existing Huawei phones around the world won’t be immediately impacted by the decision, the future of updates for those phones as well as any new phones Huawei would produce remains in question.[...]
[url]https://www.theverge.com/2019/5/19/18631558/google-huawei-android-suspension[/url]

Anonymous, 20 May 2019So US killed Huawei huh?I mean the law, no offense

So US killed Huawei huh?

Anonymous, 20 May 2019They are just gonna use Open source Android without google ... moreGoogle Apps are the main attraction to Android, without it, Huawei will have a difficult time appealing to the general consumers. Sure, the tech savvy ones will know how to manually overcome it.

But still, we need to be careful with Huawei products, it is not just the software, the hardware components that are US based will dry up from their stockpile eventually (~3 months based on news) and this is a even bigger problem.

Gregor, 20 May 2019It is not what I believe or not, this is real news happeni... moreThey are just gonna use Open source Android without google apps (Which you can always add anyway) in their future phones. I suspect many people will actually be happy. It's ironic, they are getting hit for supposed "spying", but they could become the less-spying devices without the Google REAL/proven spyware.

Gregor, 20 May 2019It is not what I believe or not, this is real news happeni... moreThey will survive. At least in china because their phones there does not use google services

Sad days to come for one of my favourite brands. Crippled by a business man turned leader of a once great nation. Now sadly a country of opportunities is now a country that's crushes opportunities for others.

Phone Reviewer, 20 May 2019Do you seriously believe in the US government? All they wan... moreIt is not what I believe or not, this is real news happening right now. In case you are not aware, President Trump already signed the order and the effects are already taking place.

The question now is actually how many more months Huawei can survive. That's why I suggest avoiding Huawei for now - but it's your money if you want to take the risk.

Dont buy huawei phones unless you are ok with spy

Toto, 18 May 2019Always huawei with low internal storage, isn't worth it.There's something called the cloud.

joe nodden, 18 May 2019Why does it have a smaller battery...?The 5g modem in the phone. Whenever something new and awesome comes out in a phone, there must be a part that must be sacrificed. In this case it's the modem, just like how the headphone jack needed to be sacrificed in the Mate 20 Pro and p30 pro.