Huawei's upcoming Mate 30 and Mate 30 Pro have so far been rumored to sport 25W wireless charging, which would be the fastest yet, as well as 55W wired charging, just to break two records at once. But what about their battery capacities?

According to a new post on China's Weibo, the cells you see in the image below are going to be the ones fitted to the Mate 30 and Mate 30 Pro. If this is true - and that's a big "if" - then the Mate 30 should get a 4,200 mAh unit, while the Pro model will have a 4,500 mAh battery keeping its lights running. 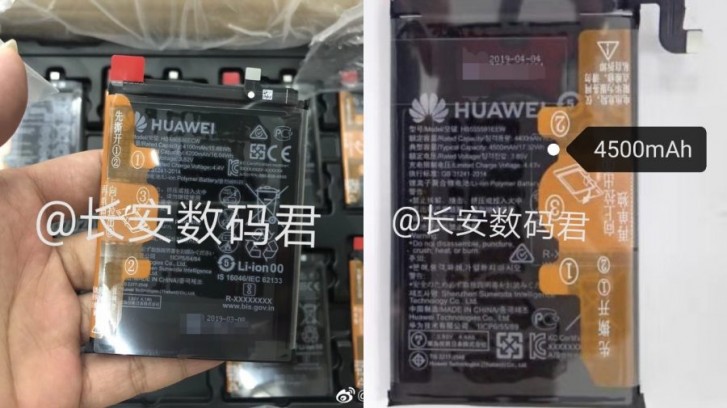 That would be a 5% increase in capacity for the Mate 30 compared to its predecessor, and around a 7% increase for the Mate 30 Pro when you compare it to the Mate 20 Pro. Add to that the Kirin 990 chipset, that's rumored to be built on a very efficient process, and battery life should (at least theoretically) be improved from the Mates of 2018.

nokia camera design. well its ok becuase ex nokia employees on the camera module is working on huawei already so doubt about it. i congratulate the ex nokia team for making a big role of this brand to make this brand possible on mobile industry.

To those who said Note 10 copied P30, now who is copying Motorola? Look at their Freebuds? Yeah, I total hate company copying and brag about it.

It will come with bloated EMUI as usual.