CAD renders of the Huawei Mate 30 Pro arriving on September 19 have surfaced, giving us our best look yet at Huawei's upcoming flagship. These come to us through the usually reliable leakster OnLeaks who says the renders aren't 100% accurate, so the final product may have some differences.

That said, the Mate 30 Pro will sport a waterfall display which is said to measure 6.6 inches diagonally and likely have a fingerprint reader embedded in it. The screen has curved edges and a wide notch up top housing three cameras. 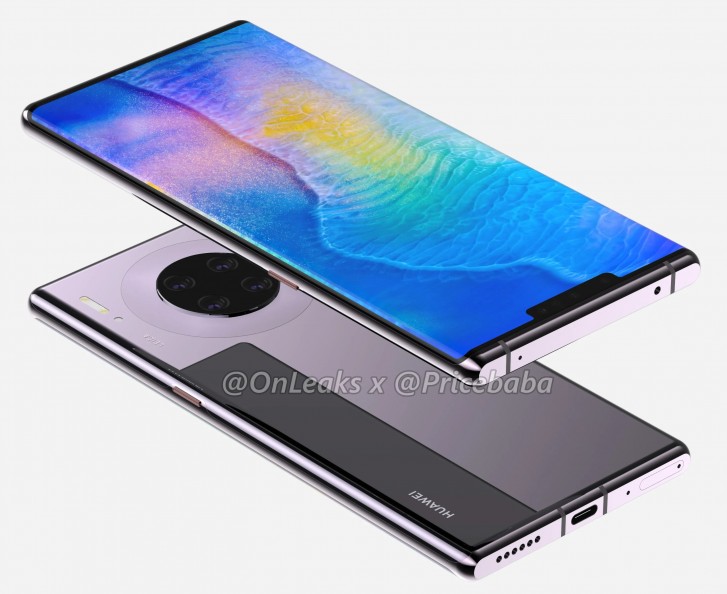 Around the back, we have a quad camera setup placed in a 2x2 grid in the center inside a circular island. This setup is rumored to be a combination of 40MP main, 40MP ultra-wide and 8MP telephoto units joined by a 3D TOF sensor.

The rear cameras have the LED flash on their left with the LEICA branding below.

On the right side of the phone is the power key but we don't see the volume rocker in the images. That's because the Mate 30 Pro is rumored to have a touch-sensitive area around the power button that will let users adjust the volume by sliding their finger up and down.

Moving on to the bottom, we get a USB-C port flanked by a speaker, primary microphone, and a SIM card slot. At the top is the secondary microphone accompanied by an IR Blaster.

The Huawei Mate 30 Pro will likely have the Kirin 990 SoC under the hood which will be announced on September 6.

Huawei hasn't shared any details about the Mate 30 Pro yet, but we expect to hear more about it in the days leading to the official announcement.

Huawei will unveil the Kirin 990 simultaneously in Berlin and Beijing

Yes, you buy that.

Man thats your opinion and apart from the lord creator known as god human kind often making mistakes in their selves so even you can be wrong and time will tell.

In a world where the economy of each country is deeply intertwined and they all share resources do you really think that USA isolating itself will help your economy thrive or something? Why do you think the moment Huawei was banned numerous voices ro...