The Huawei Mate 50 Pro comes in two main versions - leather and glass. The Orange Mate features a Kunlun glass front and a leather back. The Black and Silver models rely on unknown glass panels on both sides. We have the Orange Mate 50 Pro, and in addition to its superior build, it's also looking gorgeous. 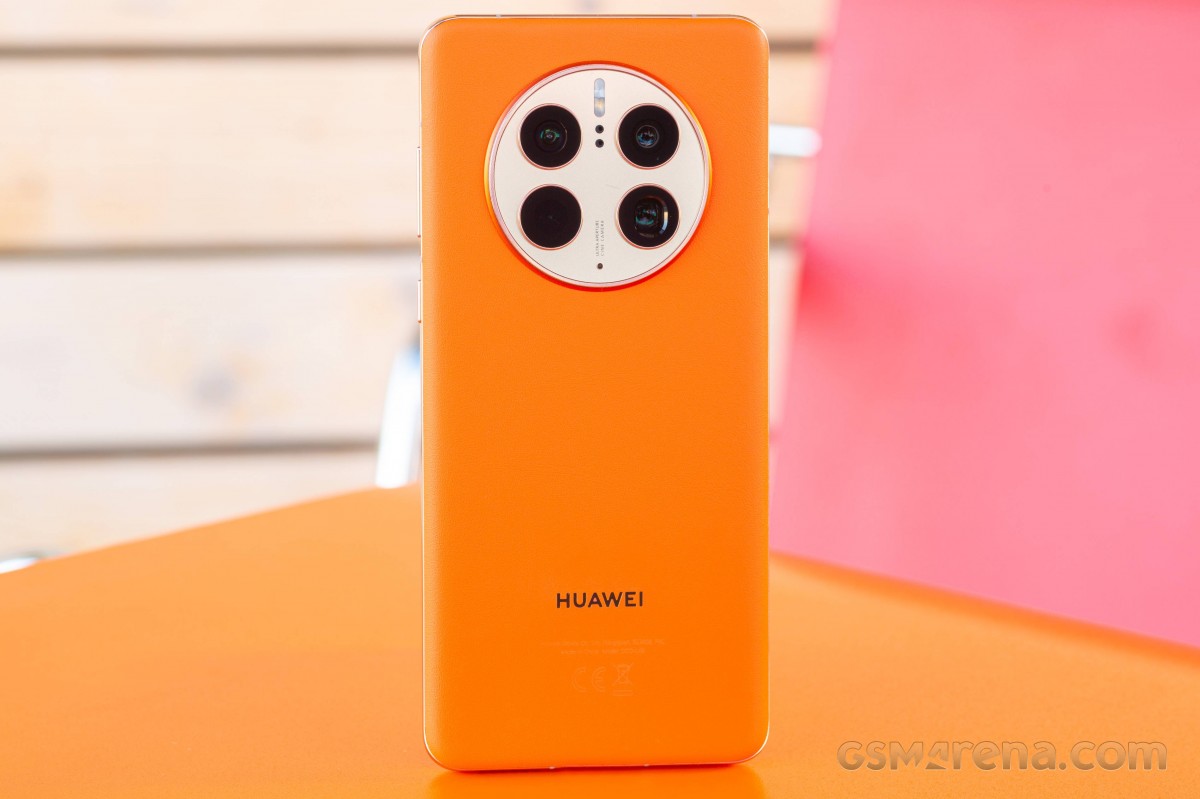 Huawei has been releasing curved flagships with sleek design for a while now, and the new Mate 50 Pro doesn't break the pattern. In fact, the new Mate takes a lot of key elements from the last few Mate flagships - the curved front with the long notch, the curved leather back, and even the circular camera setup.

Of course, there are also a few changes - such as the Clous de Paris pattern around the camera island - it's a metal ring with tiny pyramids surrounding the jutting-out camera glass. And we really love the orange vegan leather on the back - it is soft, grippy, and incredibly fingerprint resistant. 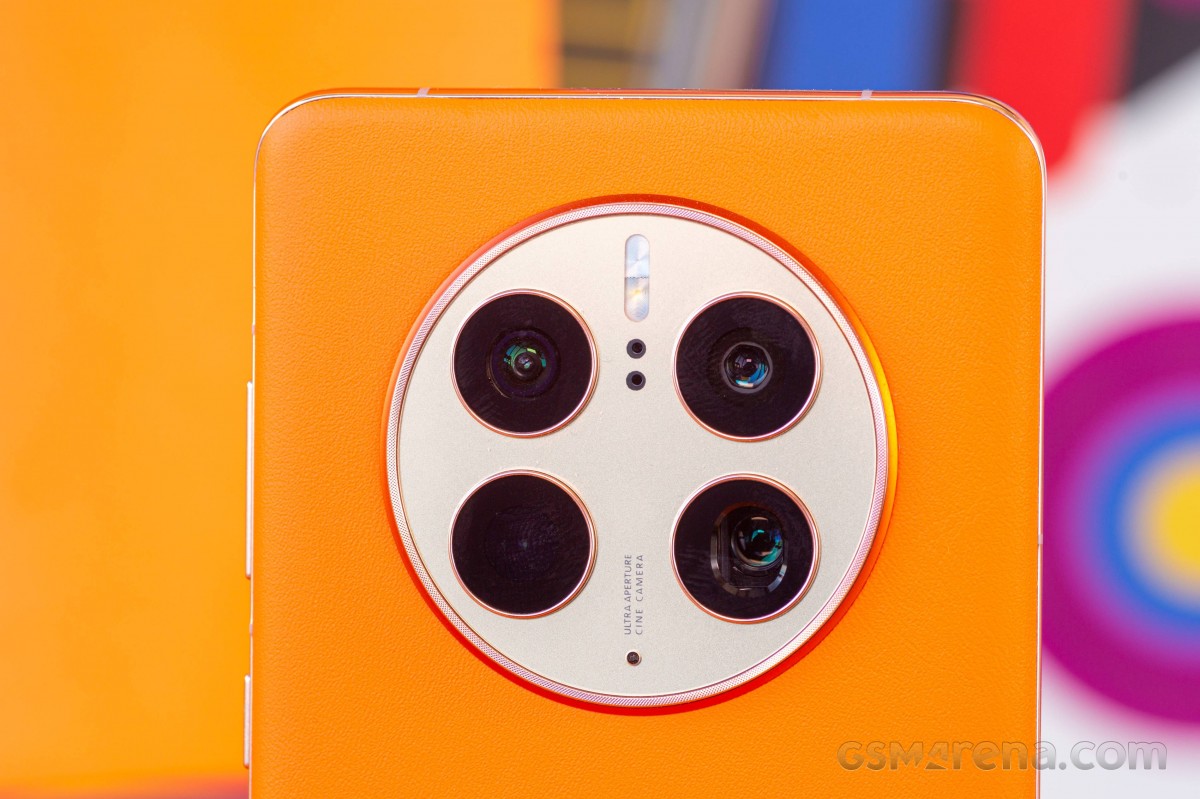 The Huawei Mate 50 Pro, just like previous models, has an aluminum chassis, one you can see and feel around the sides. The frame is glossy and matches the color of the back panel. The shape is what you can expect on a curved phone - slightly curved, too. The metal is impressively thin on the left and right sides - just 2mm, while the top and bottom parts are as thick as the phone itself - about 8-9mm.

The phone is IP68-rated for dust and water resistance, and it can survive in 2m deep water for 30 minutes. But wait, there is a twist.

The Orange version has a special Kunlun glass on the screen. It is allegedly very drop-resistant, up to 10 times better than the glass used on the other Mate 50 Pro versions. 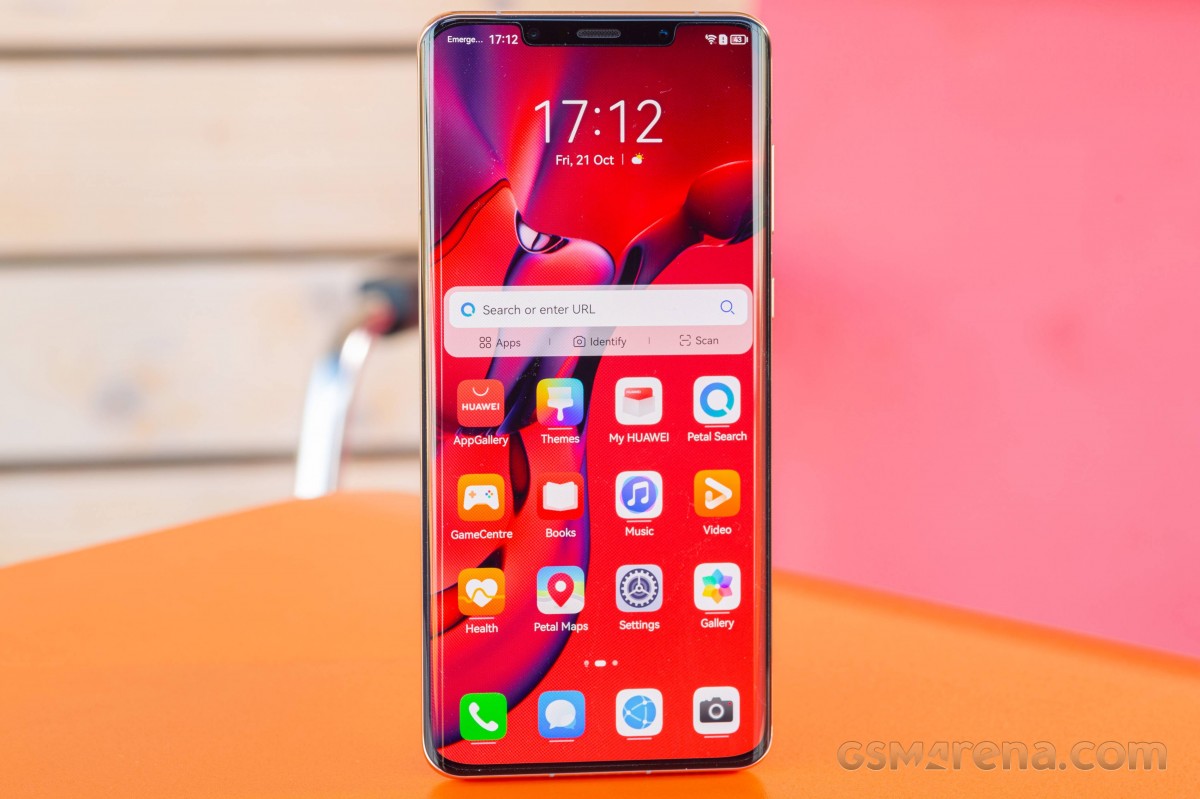 Equally impressive is the improved water protection - the orange Mate 50 Pro can sink in 6m deep water and survive to tell the tale. So far, the iPhones have been the only non-rugged phones to make similar promises.

The front is reminiscent of the Huawei Mate 20 Pro from 2018 - a curved display with a long, thin notch. The OLED panel has improved greatly since then - it supports a 120Hz refresh rate, 10-bit color depth, and HDR10+. There is also high-frequency 1440Hz PWM dimming for those sensitive to the regular dimming frequencies of OLEDs. 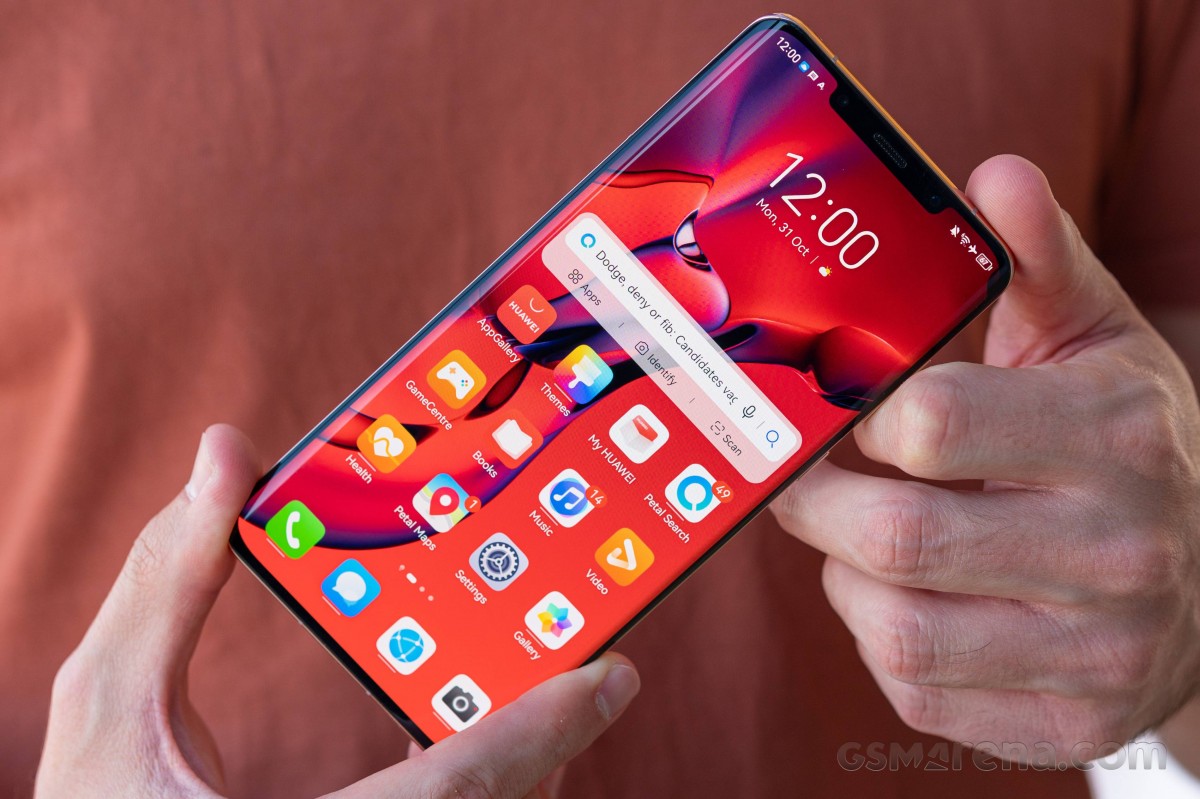 The notch returns, replacing the pill-shaped cutout we saw on the Mate 40 Pro. The Mate 50 Pro has a 13MP ultrawide-angle selfie camera, a 3D ToF system for Face ID, and an earpiece that doubles as a second speaker. Sadly, the selfie camera has no autofocus capabilities. 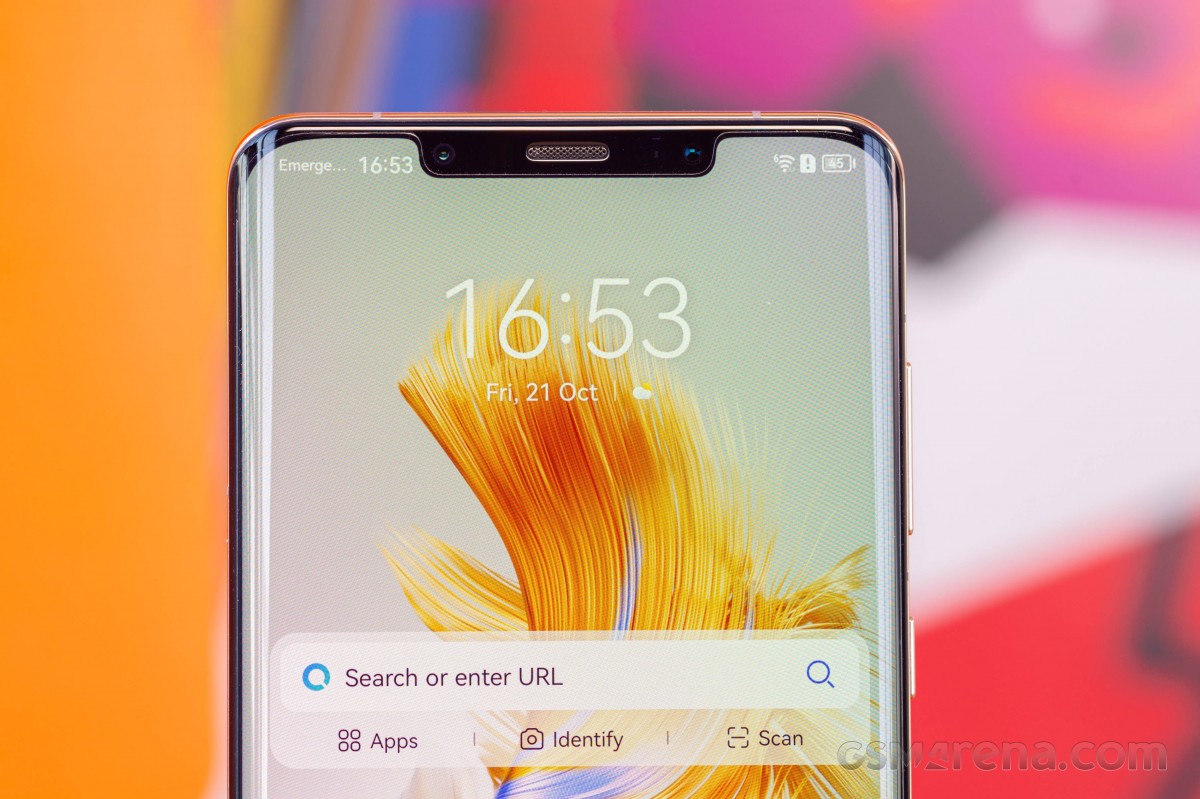 There is an optical fingerprint scanner under the display, near the bottom. It works great, too - responsive, fast and reliable. This makes the Mate 50 Pro one of the few phones on the market with both secure fingerprint and biometrics. 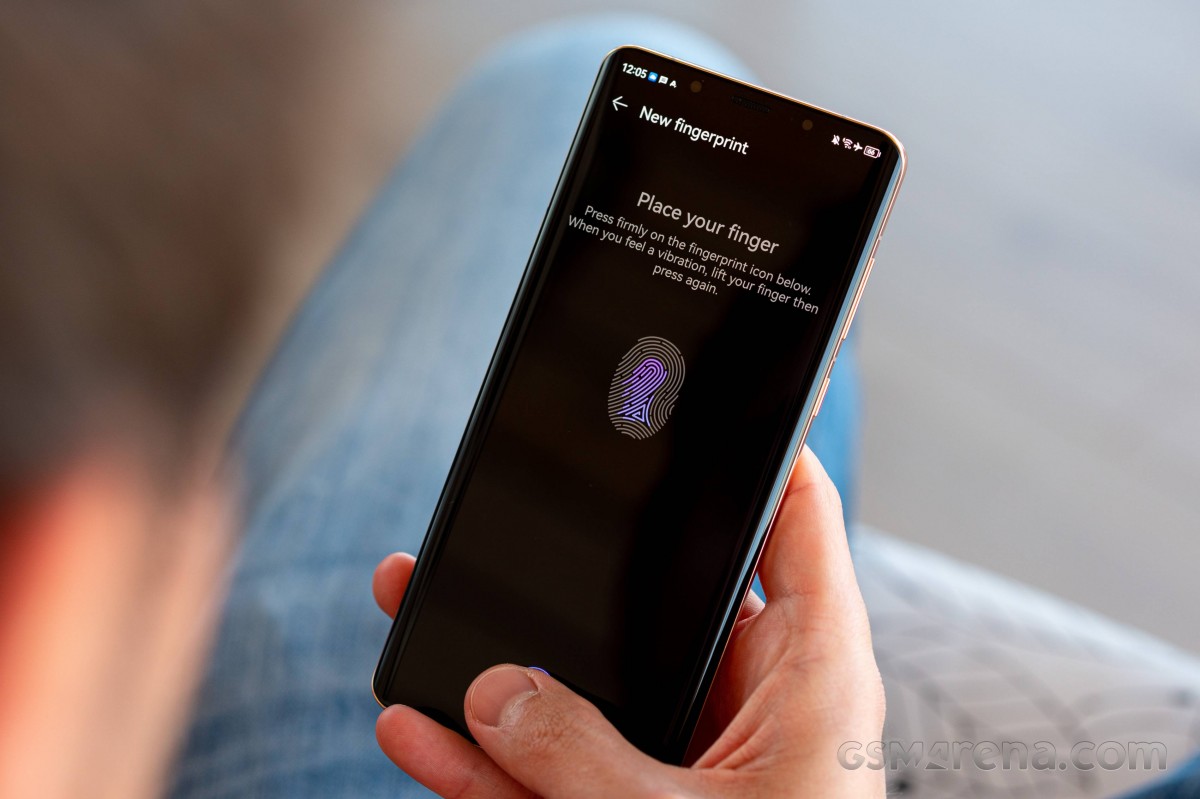 The screen bezels are thin and even around all sides, and since the notch isn't as thick as on the iPhones, it isn't as big of an eyesore.

The back is where all the imaging magic happens. The circular camera island sticks about 2-3mm over the leather back. But since it's that large, it doesn't make the phone wobble when placed on a flat surface. Adding the protective case will make the camera flush with the back. 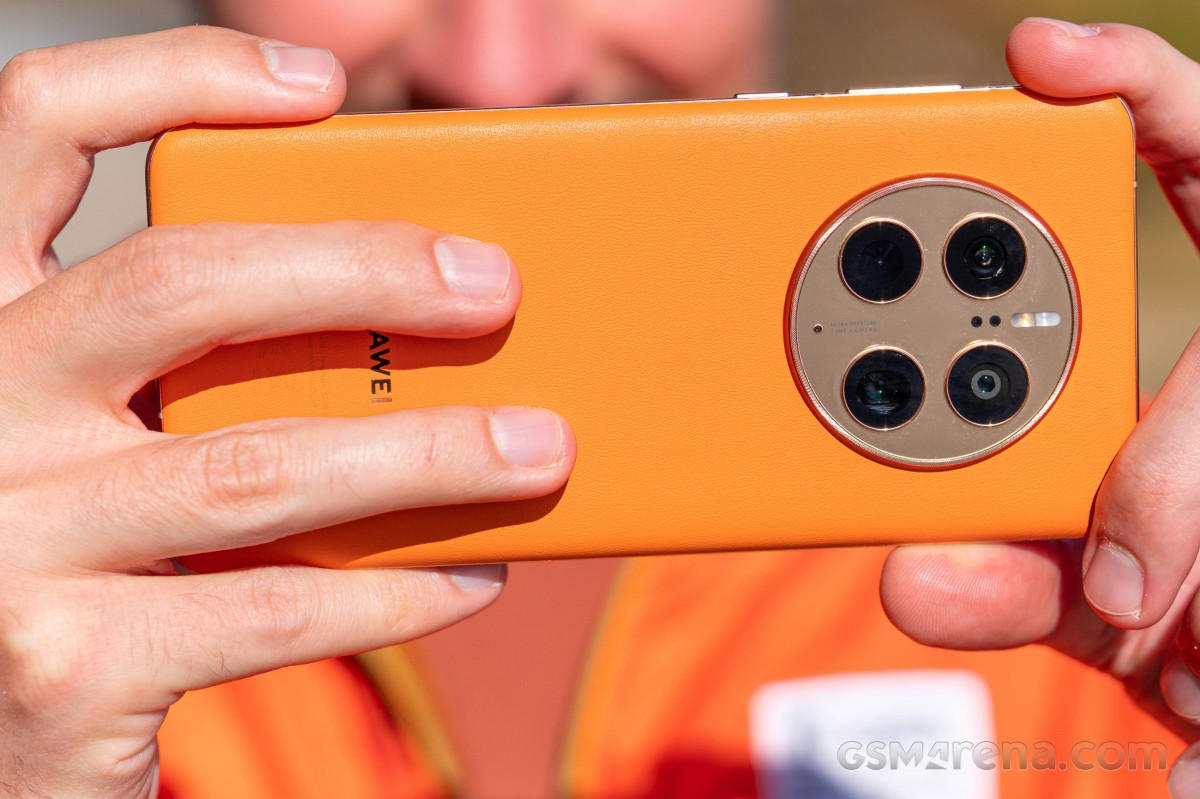 There are four separate rings on the camera island - the top left has the 13MP ultrawide-angle camera, the top right has the primary 50MP camera, then there is the bottom right with the 64MP with 3.5x a periscopic lens, and the bottom left contains the laser autofocus system.

Between the four rings, you can spot the dual-tone dual-LED flash, the multispectral sensor, and one of the microphones. 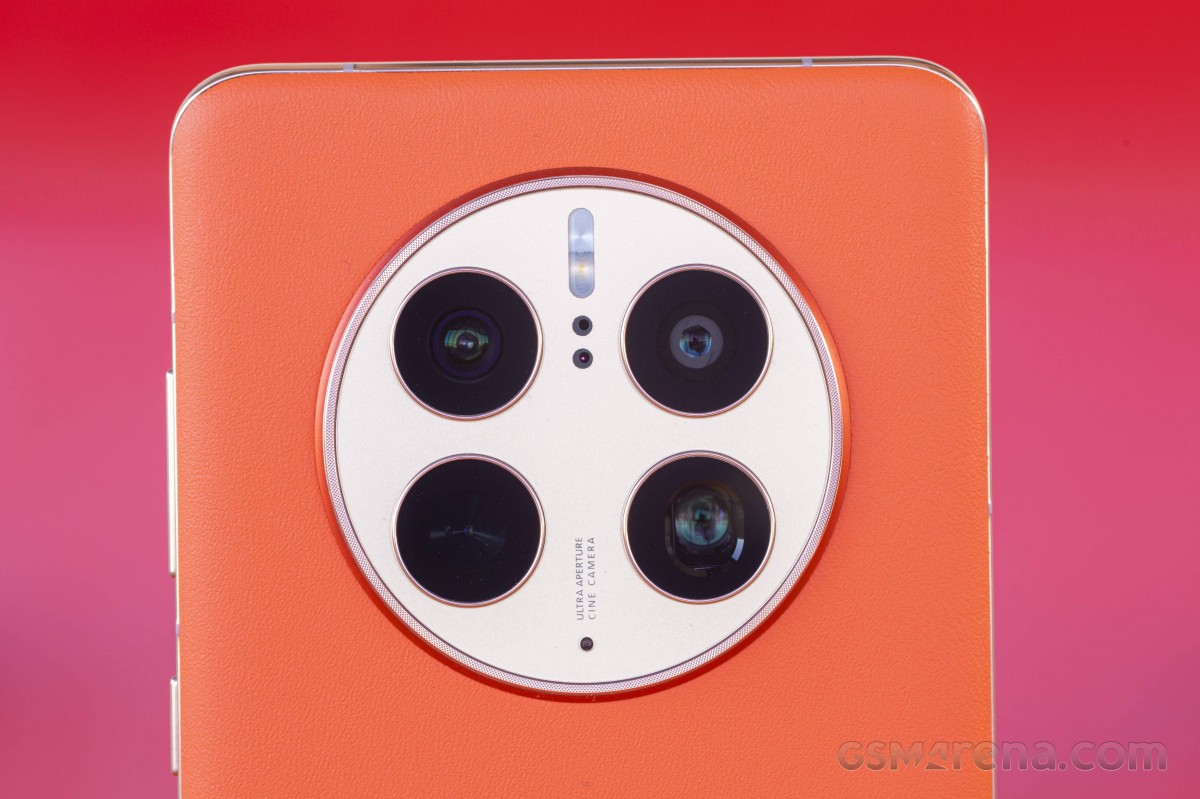 One of the highlights of this camera system is the variable aperture lens for the main camera - it can go between f/1.4 and f/4.0. The camera app chooses it automatically, but you can manually adjust it in Pro mode. In addition to the more realistic photos and depth of field, it will also allow for much more natural bokeh when it comes to closeups and portraits.

We already talked about the frame, which is quite thin around the long sides. There is nothing on the left part, while the volume and power/lock keys are on the right side. 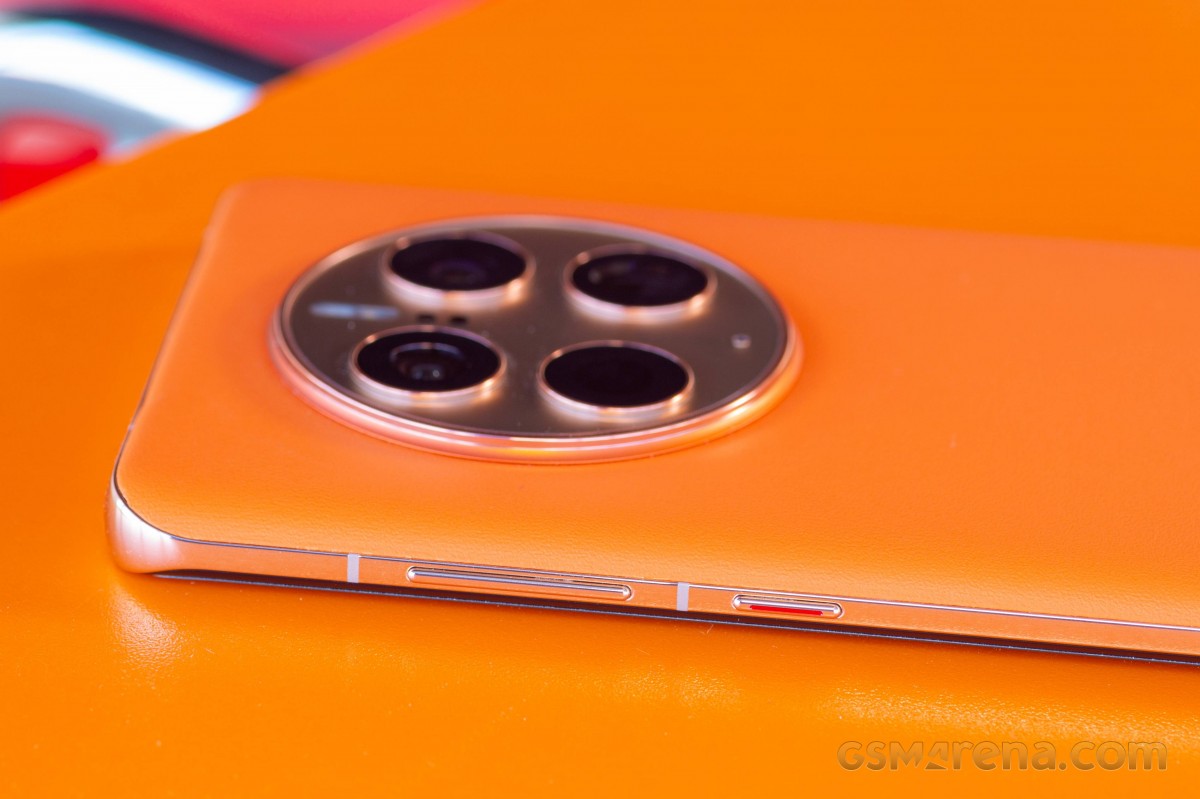 The top of the Mate 50 Pro houses another microphone and an IR blaster. 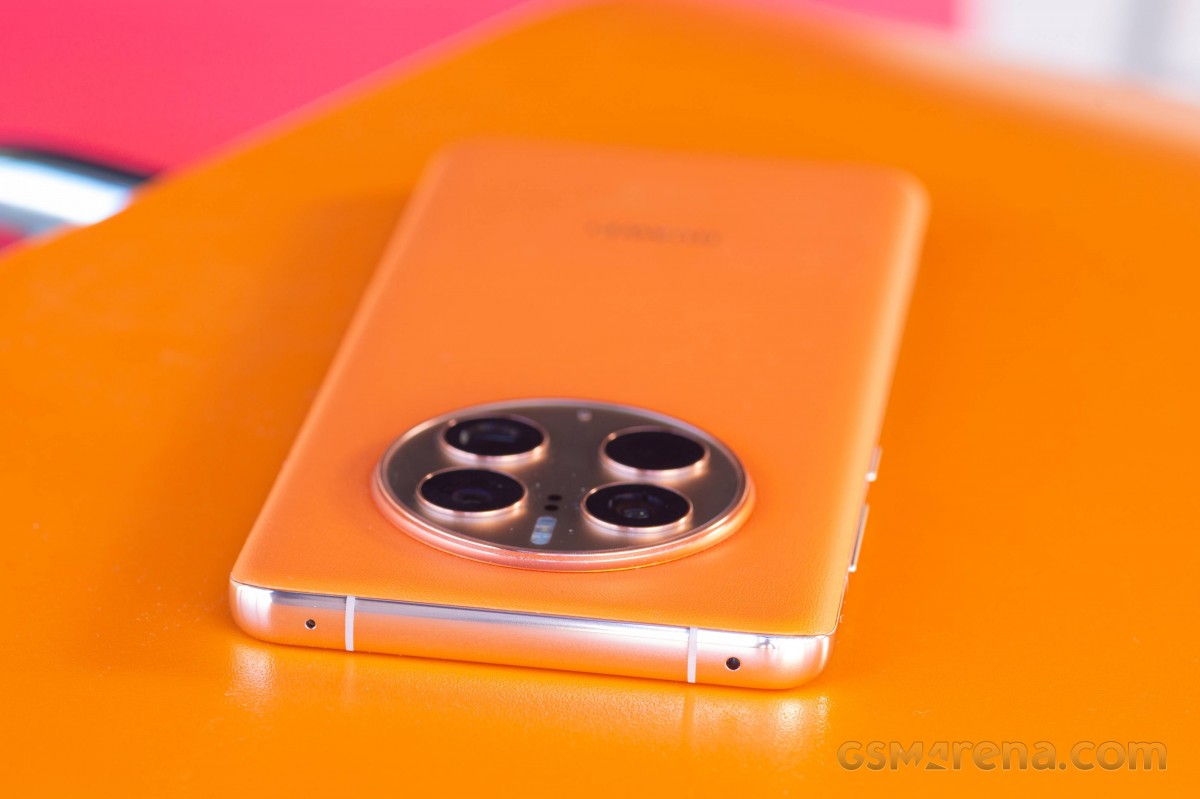 The bottom has the SIM/NM card slot, the USB-C port, the primary mic, and the second speaker. 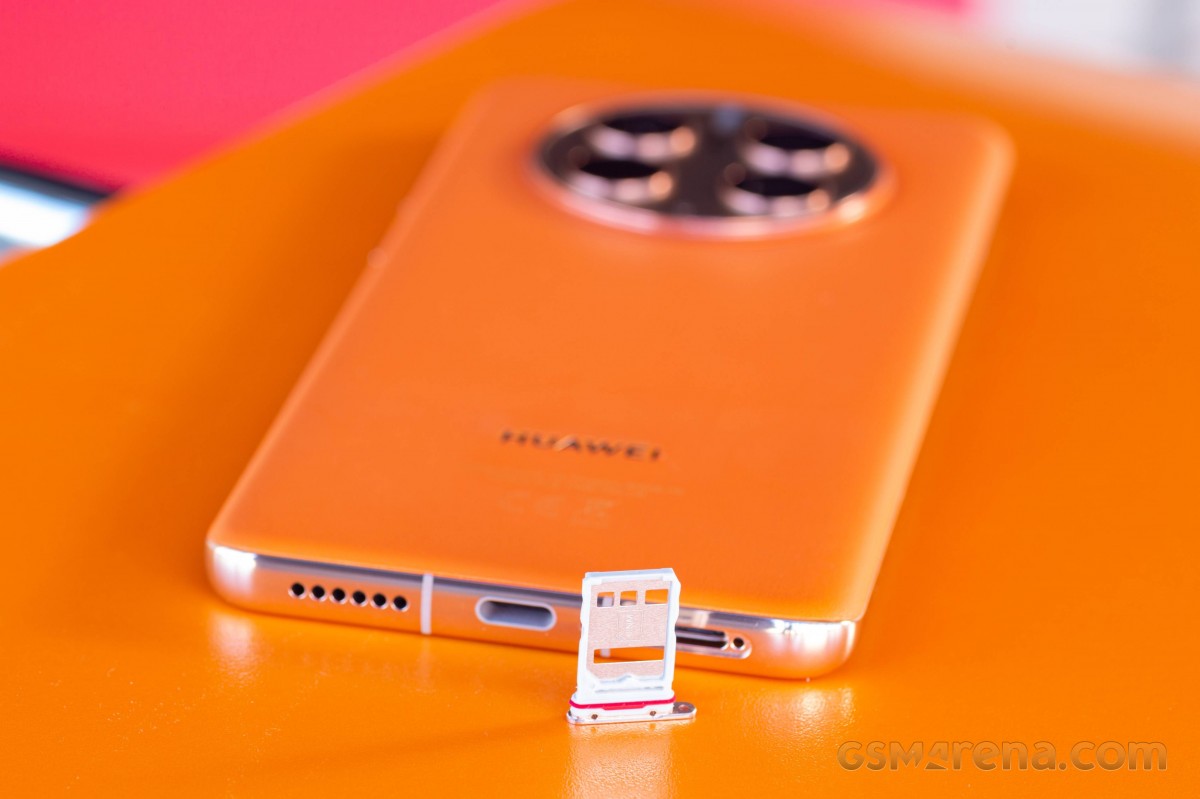 The orange Huawei Mate 50 Pro feels lovely in hand - it's a sleek phone with a good grip thanks to the leather back.

The thin frame compromises the grip when taking photos or capturing videos, though, so if you are going to do that a lot (on vacation or at an event/concert), we suggest using the case on these occasions for the extra grip it provides. 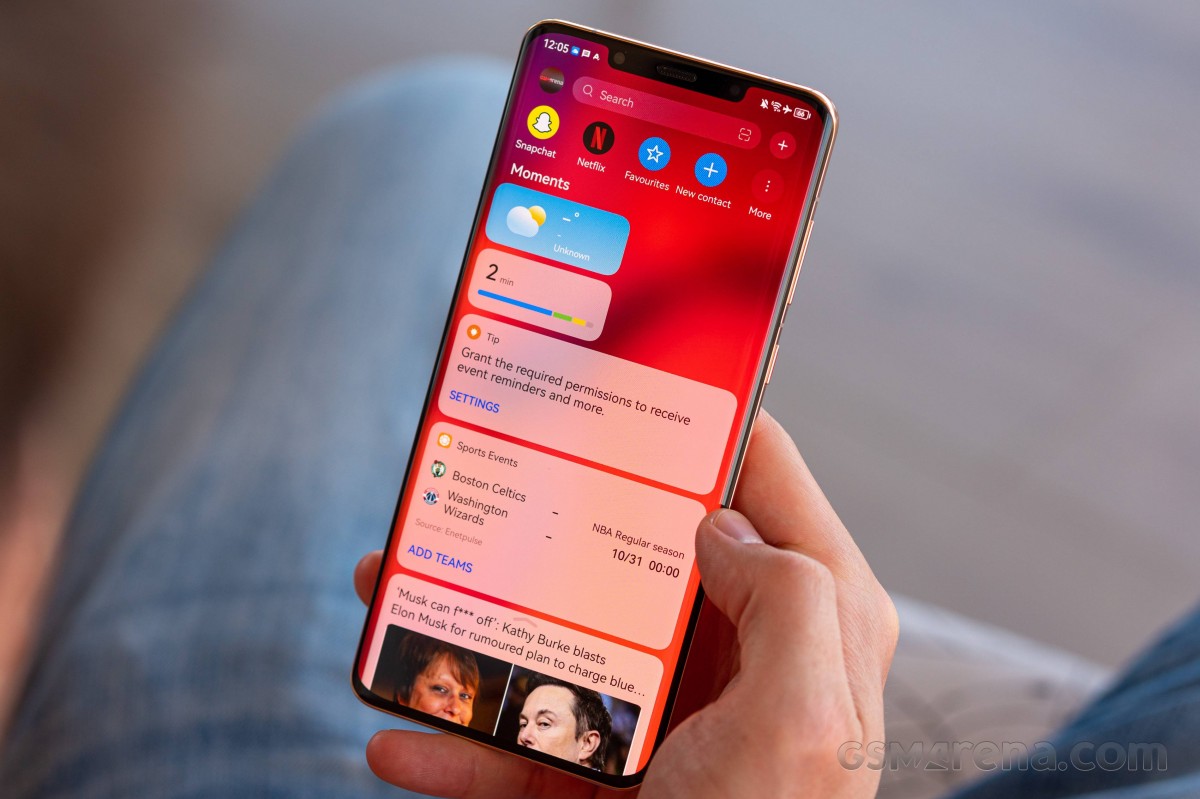 We are fans of the Mate 50 Pro premium build - it is a solid phone with an exquisite design and durable body. But we are not keen on the model segmentation - we don't understand why the orange version is the only one to get the Kunlun glass - it should have been available across all versions.

You are absolutely correct.

The best smartphone for me personally. Heres why... 1:Privacy, its the US companies that spy on citizens that has been proven via Snowden's leaks. China doesnt care about spying on you, thats propaganda to keep you from getting a phone that...