The Huawei Mate 8 measures 157.1 x 80.6 x 7.9 mm which is very compact for a 6-inch smartphone. It is, in fact, 4.2mm shorter than the 5.7-inch Huawei-made Nexus 6P, and a millimeter shorter than the iPhone 6s Plus, which only has a 5.5-inch display. The LG V10, depending on how you treat its two-piece display, could come the closest in terms of screen-to-body ratio, but it's still behind the spectacular Mate 8.

The 185g weight is just right, given the combination of display diagonal, battery capacity and metal body. The Nexus 6P, for example, has both a smaller display and a smaller battery and is only 7g lighter.

The Huawei Mate 8 is one seriously good-looking smartphone. It's like a tuxedo in a world of jeans and sweaters. It clearly means business. It's what the BlackBerry Priv should have been instead of the wobbling plasticky mess it is. 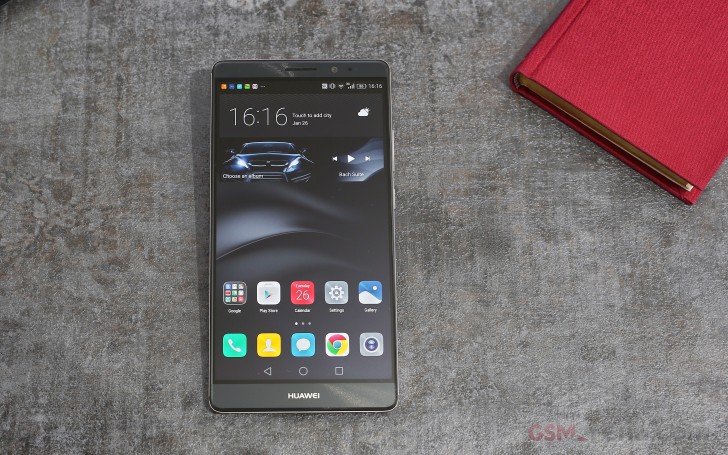 However, all of this could have easily been said of the smaller Mate S, with which the Mate 8 shares a lot of design clues. What the Mate 8 brings on top of the S is sheer size, and for some, that's what matters the most.

The Mate 8 features an aluminum unibody, well befitting its flagship status (and price, too). The back is sandblasted, Huawei states in press material, for a fine satin finish. It's by no stretch fingerprint-friendly, and you can only see the occasional mark when you hold it up to direct light.

The mandatory antenna bands top and bottom are quite slim, and their tint is very much the same as the one of the actual metal, so as far as antenna bands go, these are among the less-disturbing ones. That said, the Mate S may even deserve an extra half-point for style in this respect if we gave points.

Sandblasted back • Camera and fingerprint sensor

A polarizing aspect of the Mate 8's design, the two circular elements on the back (camera lens and fingerprint sensor) have little in common with the overall square-faced sharp-edged character of the smartphone.

The Mate7 and the Mate S used rectangular control elements, and it seemed to work great for them, so you would understand that we were initially baffled as to why Huawei chose to go with circles on the Mate 8.

A week later and first impressions out the door, we may be starting to get it. A camera lens is circular to begin with, so in a way, Huawei went back to basics. And then once you have one, the second circle only comes naturally. Of course, there is also the fact that two circles for the number of eight. But perhaps we're digging too deep on this one. Perhaps they just needed it to look different than the Mate 7's rear deck.

The camera lens, oversized for stylistic purposes, sticks out just about half a millimeter and it's what the phone rests on when left flat on a table. It doesn't wobble, though, the lens being on the central axis. However, the lens ring on our unit quickly got chipped, which didn't hurt the glass, but does pose the question of the durability of the design. 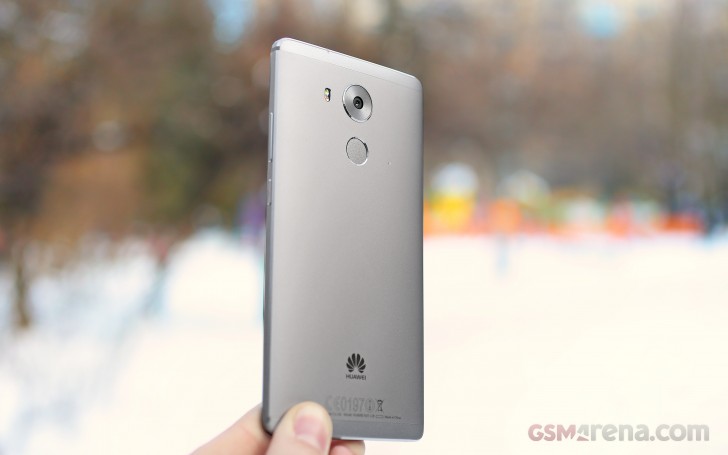 The fingerprint sensor is ever so slightly recessed, similarly to the Nexus 6P, and unlike the deeper crater of the Mate7. The depth is just enough for it to be immediately identifiable with the tip of your finger, though.

The front is a typical Mate affair, with some added touches. The area is dominated by the display, all 6 inches of it, with spectacularly minimal bezels on either side. There's a thin black frame around the actual panel, which aims to achieve a bezel-less look, but it can't quite get there.

The chin below the display has little function other than providing a stage for the company logo. You can't do without it, of course, there are the USB port and the speaker underneath, and it's also necessary for one simple purpose - handling.

What sets the Mate 8 apart from most other smartphones, Huawei's or otherwise, are the edges of the glass. Where most other premium devices, Mate S included, have their glass panels end in an arc (the highly-scientific 2.5D glass term), the Mate 8's glass gets a 45-degree chamfer for a more technical look.

The forehead is packed with features, the earpiece behind a central slit. To its right is the 8MP front camera, ambient light and proximity sensors. Ont the far left there's an LED notification light.

Unlike the sandblasted back, the frame is treated to a brushed finish with chamfered edges - the Mate 8 is big on chamfers. They make it look and feel a lot thinner than the 7.9mm would suggest, and that's certainly the effect Huawei sought after. The last thing you want is an 80mm wide smartphone that is also 8mm thick at the sides.

The power button is also textured though it may be too fine for instant distinction. You're likely going to be using the fingerprint sensor for unlocking, so it's not an issue.

Right side with power button and volume rocker

On the left, there's only the card slot. The tray can take two nano-SIM cards or a nano-SIM and a microSD card but not all three at once. It's better than nothing; it's also not ideal. Manufacturers seem to be set on establishing it as the standard, so we'll just have to deal with it.

The top is home to the 3.5mm audio jack and the secondary microphone.

The bottom has the microUSB port in the middle (no Type-C for better or worse) with a grille on each side. There's a single speaker behind the right one only, though. The primary mic is in here somewhere too. The two Torx screws hold the phone together, but it's not exactly iPhone style. Instead, the metal back and sides act as a lid covering the insides.

microUSB, speaker and primary mic on the bottom

When handling the Mate 8, there's no escaping the fact that it's a 6-inch device. But we're talking phablets territory here, and once you've gone big-screen with your phone, you can rarely go back. The Mate 8 is very compact for what it is, thanks to minimal bezels and clever design. That's not to say that you won't be needing both hands most of the time.