The Huawei Mate 9 comes in a retail package that leaves no doubt about its premium market position. Aside from the presentation, the contents are pretty lavish, too.

You'll find two additional separate boxes inside and the first one holds the mighty 22.5-Watt charger, a proprietary Type-C cable (more on that in the Battery section), a micro-USB to Type-C adapter, and a headset.

The second one contains the SIM eject tool and a bumper case. The latter snaps tightly onto the Mate and covers the back and the corners, but despite its fine cross-hatch pattern it robs the device of much of its premium vibe.

The Mate 9 measures 156.9 x 78.9 x 7.9 mm, which makes it as thick as two generations of Mates before it. It's a whole 0.2mm shorter, but more importantly to handling, width has been reduced by 1.7mm. Of course, that comes as a direct consequence of the smaller display.

The new phablet has gained a few extra grams though, five to be precise, and now tips the scales at 190g. That's 2g more than the iPhone 7 Plus.

Speaking of the iPhone 7 Plus, the Mate is actually 1.3mm shorter and just a millimeter wider, while packing a significantly larger 5.9" screen compared to the iPhone's 5.5 inches. We'd say that speaks volumes about Huawei's efficient use of space (not to mention what it says about the iPhone, but we've been through that, thrice).

The Mate 9 follows closely in the footsteps of the Mate 8 in terms of design, last year's model itself resembling the Ascend Mate7 from two years ago. That's more of a testament to just how right Huawei got it with the Mate7 in the first place, rather than a complaint for an unimaginative design. 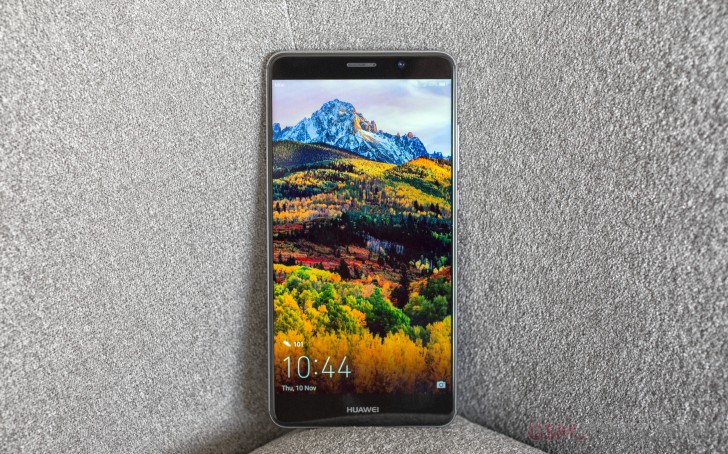 The Mate 9 is undeniably large, but that's what got you ogling it in the first place, admit it. Way too many makers draw the line at 5.7 inches for their top-end phablets and ma-a-aybe, just maybe, also produce a larger device, but with mid-range specs.

Big-screen lovers (a few of us here) insist that 6" is the sweet spot, and the last two generations of Mates were precisely there. We'd let the Mate 9 slide with its 5.9 inches, as long as the downward trend stops with this model.

What the reduction in display size brings is an improvement in handling, hard as it may be to quantify. It's excessive width that usually spoils the handling experience with large screen phones but the Mate 9 has pretty much none of it. Minimum side bezels (okay, obviously not curved-screen-minimum, but still) make it perfectly manageable single-handedly for basic tasks, though you'll inevitably need to pull the other hand out of your pocket to put it to full use.

Huawei Mate 9 in the hand

The thin sides are complemented by not so sleek chin and forehead. We're not talking iPhone 7 Plus or Pixel XL footprint squandering, but with a 2.2mm shorter display (at least) the overall height compared to the Mate 8 has been reduced by just 0.2mm so the other 2mm (at least) have gone into bezels. That's just the engineer in one of our editors taking it way too far though - the Mate 9 is still tough to beat for screen-to-body ratio.

The front glass is nicely curved towards all four extremes, so your fingers don't catch any sharp edges like it's 2014. The glass carries no commercial name though, nor does Huawei mention anything about protection. The P9 did have some sort of Gorilla Glass on top, but was somewhat prone to scratching in our experience. The Mate 8 before it had Gorrilla Glass 4 and we observed no such issues. The Mate 9 does come with a plastic screen protector pre-applied (which we duly removed, of course), but we feel a device of its caliber deserves more than that.

The top bezel has the usual top bezel stuff - the earpiece in the center with the ambient light/proximity sensors to its right, followed by the selfie camera and a tiny LED notification light further to the right. Now, we're speculating, but one of the 4 microphones might be tucked in there with the earpiece, maybe.

Thin bezels on the sides, slightly bigger ones top and bottom • you can't see it, but there's an LED on the right

The curvature on the rear is another one of those touches beneficial to handling. Not that its maximum 7.9mm are what you'd call thick, but it gets even thinner towards the sides so it's both comfortable to hold and feeling fancy and expensive.

The back panel has been sandblasted, which is one of 50 processes needed to get it to its final form, including a full hour of CNC milling. That's what Huawei says. What we have to add is that it looks premium, but is also quite slippery on its own - a pleasure to handle it may be, but make sure you handle with care. Or put on the bundled bumper cover.

A couple of antenna bands are a necessary compromise between an upmarket metal build and, you know, radio reception, but they're not overly obtrusive. What we're certainly not fans of are the regulatory markings - we've seen more subtle ways of going about the issue. 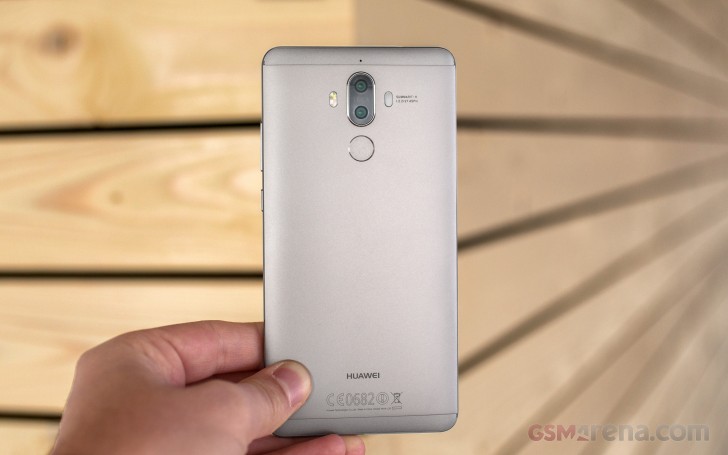 The Leica dual camera setup has taken the place of the single shooter on the Mate 8, and unlike the P9 the two cameras here are arranged vertically. There's a window on either side, the right one for the laser autofocus emitter, the left one for the dual flash. The fingerprint sensor is under the camera modules.

Above the camera you'll find the pinhole for another one of the Mate 9's four microphones (mic count = 2), which allow directional audio capture in video recording and noise canceling. That leaves two more to find.

The entire frame and the back panel are one piece (minus the antenna band cutouts) and they are finished identically, with the exception of the two shiny chamfers running along the entire perimeter of the device, serving as an accent.

The left side is home to the card tray, where on our dual-SIM model you can insert two nano SIMs or a nano SIM and a microSD card, but not all three together.

Right side • power and volume controls

The top plate houses the 3.5mm jack and the IR blaster - that's two features the iPhone 7 Plus lacks.

On the bottom is the USB Type-C port with a couple of grilles on either side for the speaker, mouthpiece (mic count = 3), and potentially the last one of the 4 microphones (mic count = 4).

Bought on April 2017, still using till now. Its been 5 years to be exact. Long lasting.

Please suggest, will I buy Mate 9 or not? I have to buy during this month. All suggestion repect