Yesterday, we saw a press render of the Huawei MatePad T, which revealed its design. But, turns out that's not the only tablet Huawei will announce soon, since another slate, dubbed Huawei MatePad, has appeared in a leaked image.

The picture is of a banner in a store in China, which reveals the design of the MatePad along with a few features. It has a 2K notchless display, which is rumored to measure 10.4" diagonally.

Around the back, you have an LED flash, keeping company to the primary camera, rumored to have an 8MP sensor. And while not clearly visible in this image, the MatePad is said to have another 8MP unit on the front, for selfies and video calls.

The Huawei MatePad has a USB-C port at the bottom, will support M-Pen stylus, and have at least two color options - White and Gray. 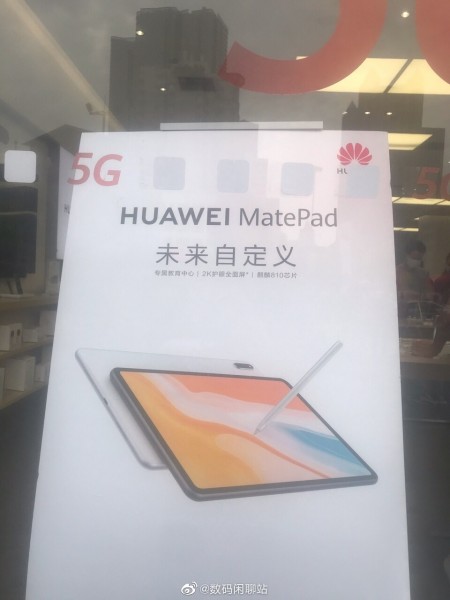 The poster also reveals that MatePad will be powered by the Kirin 810 SoC and come with an education center, which is likely an app for kids.

There's no word yet from Huawei about the MatePad, but rumors have it that it will run EMUI 10.1 Lite out of the box and pack a 7,250 mAh battery.

The MatePad will have LTE and Wi-Fi variants, with the former arriving in 4GB/64GB and 6GB/128GB memory configurations and the latter offered in 4GB/64GB and 4GB/128GB versions.

Also, why in the actual FRICK are they calling extended 1080p 2k now? It verges on deception when you don't know the aspect ratio. It's like how the Xperia 1 is "4K" yet is barely above 1440p because it's actually just tall. Just call it FHD+ like ...

Earth doesn't care, it's not a sentient being. Wake up!