Huawei has evolved the P30 Pro in a lot of ways, but when it comes to design it has stuck with its tried and tested formula. The new flagship is a dual-glass smartphone as is the norm these days but the new camera arrangement on the back, will make sure it's easily recognizable. 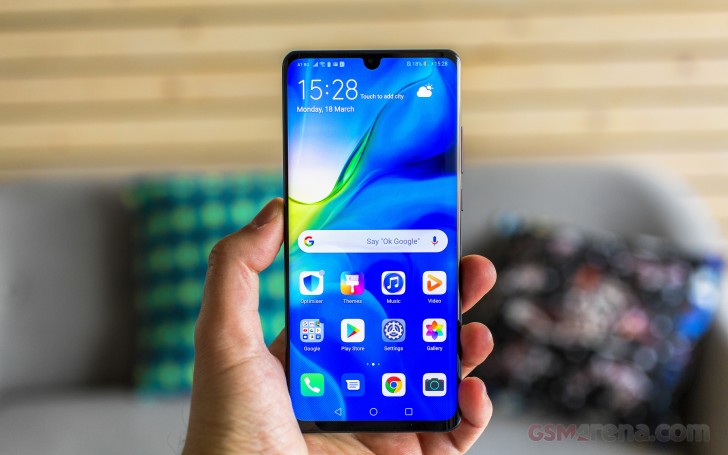 The two-color gradient was first adopted by Huawei and the tradition continues on the Huawei P30 Pro, too. There is a new signature Aurora color for the P30 series, inspired by the Aurora Borealis - or Northern Lights if you prefer. Amber Sunrise, Breathing Crystal, Black, and Pearl White are the other color options.

The signature color is stunning and lives up to its Aurora name and we can safely bet this hue will be the best-selling one. 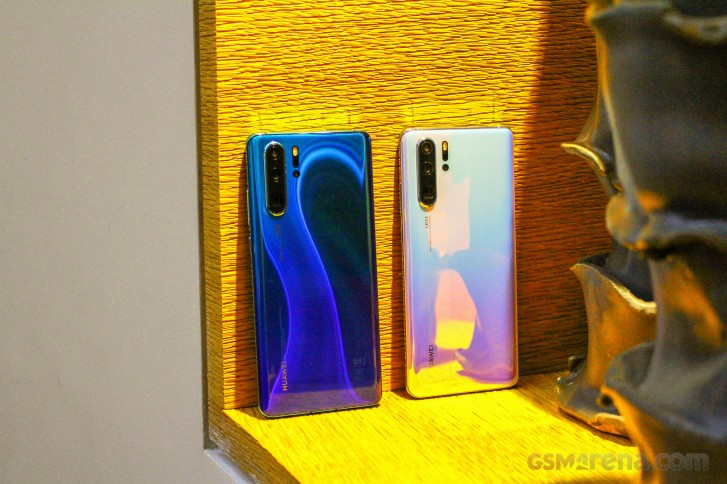 There isn't a huge difference between the footprints of the Huawei P30 and P30 Pro, but you can easily spot the different camera arrangement on the back and the lack of a periscope lens. 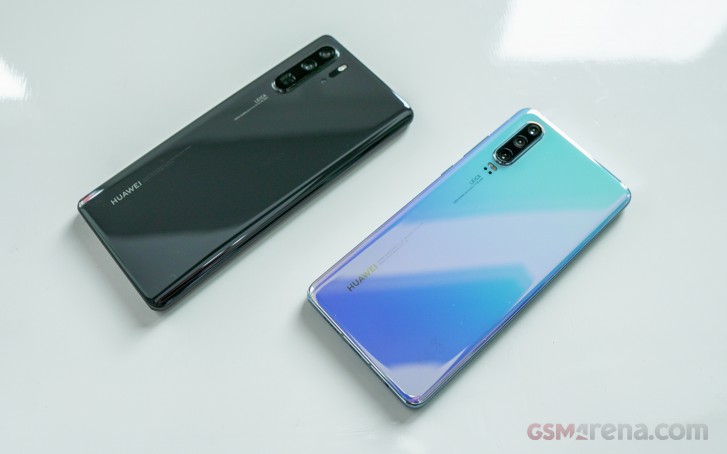 We have the more traditional black model, which is attractive if not quite as flashy as the other hues. It sure gets smudged up by fingerprints quite easily, so the other P30 Pro colors might be a bit better in this respect. 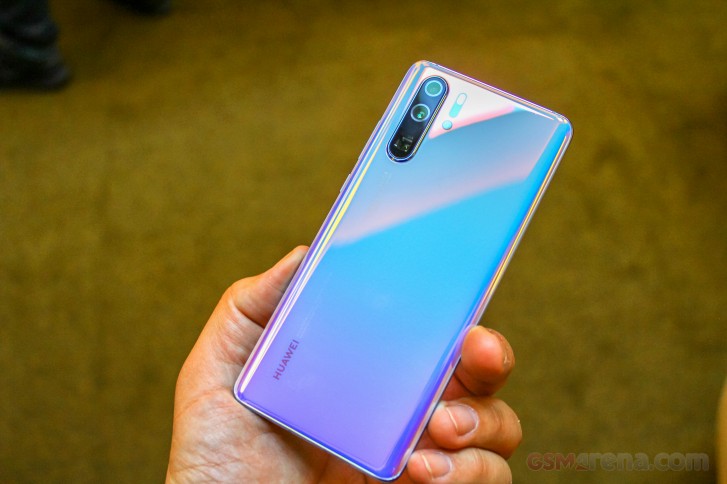 The P30 Pro looks a lot like the Mate 20 Pro and less like the P20 Pro in term of shape and curves. The front and rear glass pieces are both curved towards their longer sides. 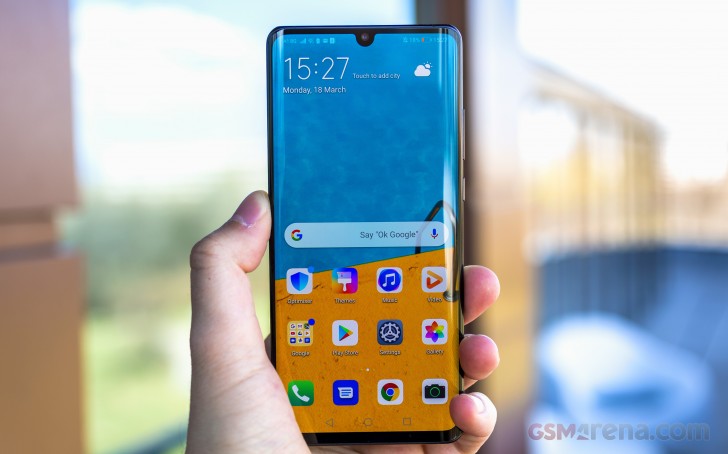 At the front of the Huawei P30 Pro is the largest screen the P series has had so far - a 6.47" AMOLED panel with curved edges. We had a look at the subpixel arrangement of the display and it seems to be the same as the one on the Mate 20 Pro suggesting the supplier is the same. And since it's not Diamond Pentile, it seems the panel provider is not Samsung. 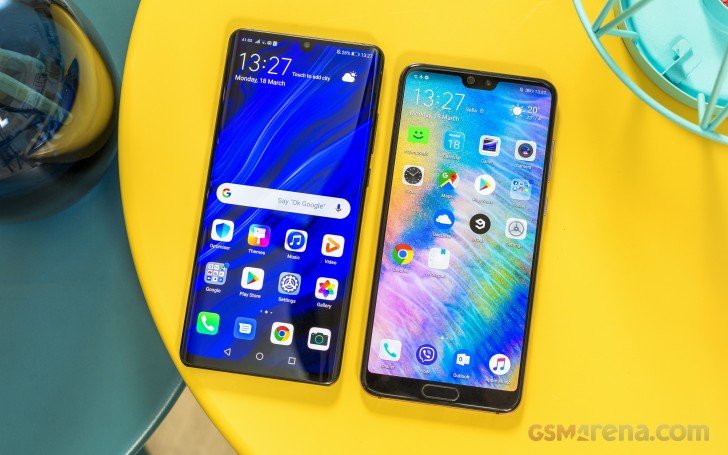 The screen size is evolving from what we've seen on earlier P-series handsets. The P9 Plus and P10 Plus both had 5.5" displays, while the P20 Pro used a 6.1" screen. Now, the P30 Pro has stepped into Mate territory with this large 6.47" panel. 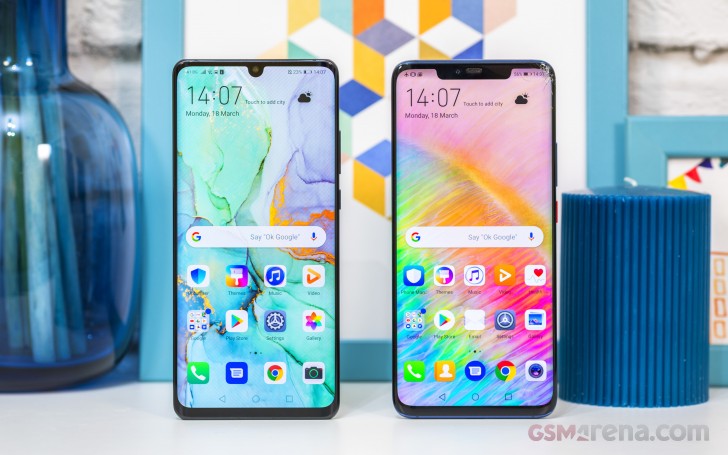 The P30 Pro screen has a tiny notch at the top that contains the selfie camera and nothing else. There isn't an advanced face recognition hardware as on the Mate 20 Pro, a LED flash, or even an earpiece.

By the way, the selfie shooter appears to be centered but it isn't, and you can tell if you look closer. The camera is about 1 or 2 mm to the left side, so if imbalances bother you, consider yourself warned.

The curved AMOLED screen is close in size to the Mate 20 Pro, but having a much smaller notch it has an advantage in usable space. It does come with a lower resolution though - the P30 Pro's panel is 1080p instead of 1440p. But even so everything still looks sharp, so we have no issues with that.

The bezels are very skinny as the trends go today. There is a small chin, sure, but as far as the sides go, the P30 Pro display goes really close to the frame. 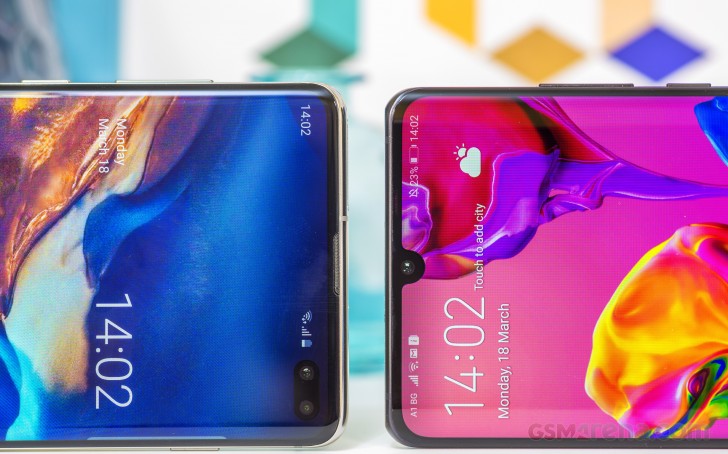 Finally, there is an under-display fingerprint scanner around the bottom of the phone. It works quite fast and while it's not always-on it doesn't require you to wake the screen up either. Once you tap around the bottom, the P30 Pro will immediately light the sensor and screen and the recognition is really fast. In fact, this is arguably the fastest sensor of this type we've tested so far.

The place of the sensor lights up every time you pick up the phone, so it's quite easy to get used to it. 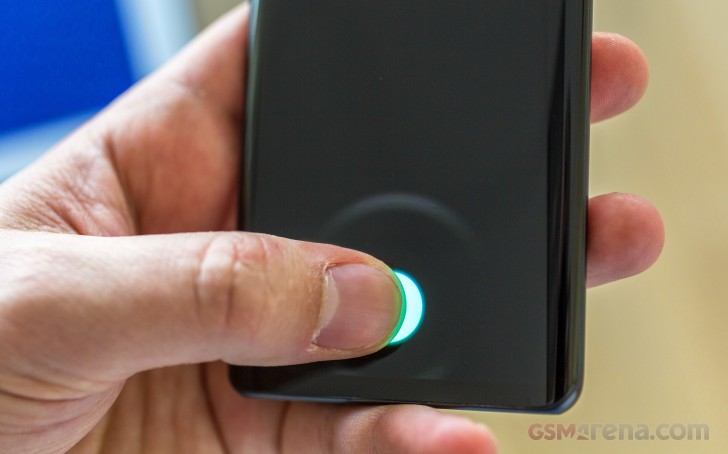 Now, let's talk earpiece or the lack of it. The P30 Pro uses bone conduction to deliver the sound during a call and so the screen acts as an earpiece. Huawei says the technology inside the P30 Pro is already a second-gen although this is the first time they've used it in a phone. It should be also superior to, say LG G8's, as the maker has eliminated the need of an exciter, which should produce crisper sound.

So, in case of the Huawei P30 Pro the whole screen vibrates to create the sound, that's why the so-called 'acoustic display' the P30 Pro offers a much deeper output and less sound leaking outside of your ear. The coil to create these vibrations isn't at the top but about 2 cm down from the selfie camera - the P30 Pro will even play an animation to show you where to place your ear for the best experience. 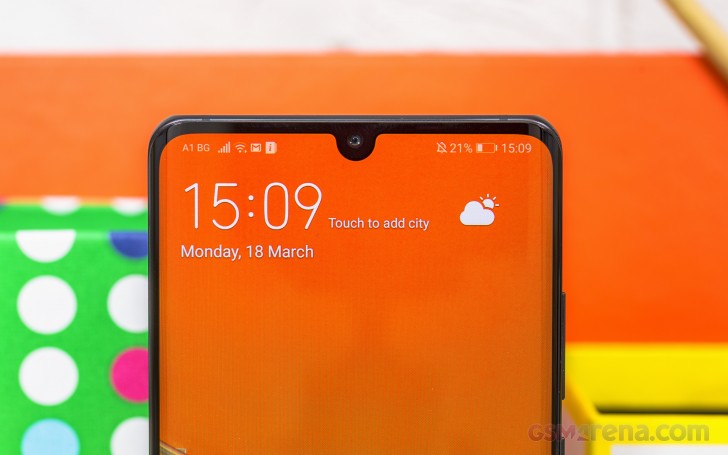 Having tested it extensively we are impressed with the technology. The sound is indeed rich and deep, and it doesn't really matter if your ear is close to the selfie camera where a traditional earpiece would be, or around the sweet spot where the exciter is. There is just a minor difference in the volume.

Also, because of the bone conduction technology sound can be heard in much noisier environments when compared to a traditional earpiece. Even if you are in a club, you will hear the other side quite clearly.

It's not all peachy though. First, because of the regular earpiece is gone, the P30 Pro has no stereo speakers.

Also, sound from your call does leak and if the volume is at the maximum, the person on the other end can still be heard by somebody standing close to you. Then again, this also applies to the regular earpieces, and we can't really say the leakage is worse than on most other phones. But what we can confirm is that unlike the original Mi Mix, the P30 Pro emits sound only from its upper front and there is nothing coming from the back of the phone.

The key feature of the Huawei P30 Pro is its quad-camera on the back, but it's not arranged in a neat rectangle as on the Mate 20 Pro. In fact, it's similar to what we saw on the P20 Pro.

There is one huge camera hump around the top left corner and three of the four snappers reside here in vertical alignment. 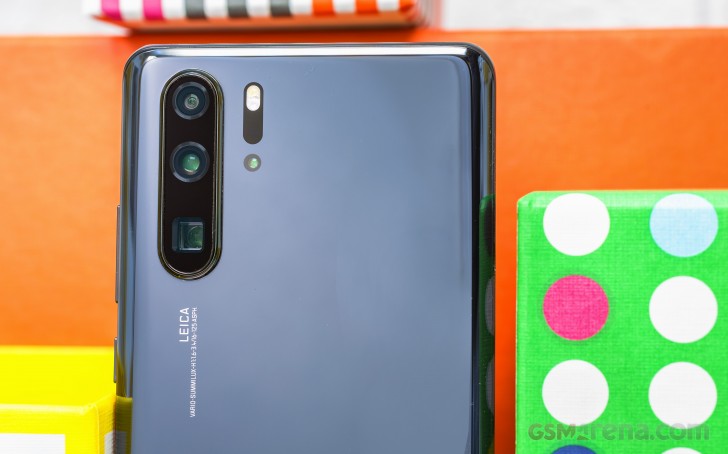 Starting top to bottom the first snapper is the 20MP one with the ultra-wide lens. Then comes the 40MP sensor with OIS, and finally you can see the end of the periscope zoom lens (135mm, f/3.4) for the 8MP sensor, also with OIS.

The setup is protruding quite a bit and the P30 Pro wobbles a lot if placed without a case on a flat surface.

Next to the triple main setup sit the dual-tone LED flash and the ToF camera, which is almost invisible on our Black model. The ToF camera replaces the laser autofocus on the P30 Pro and should also improve the edge detection accuracy in portrait shots. We'll see about that. 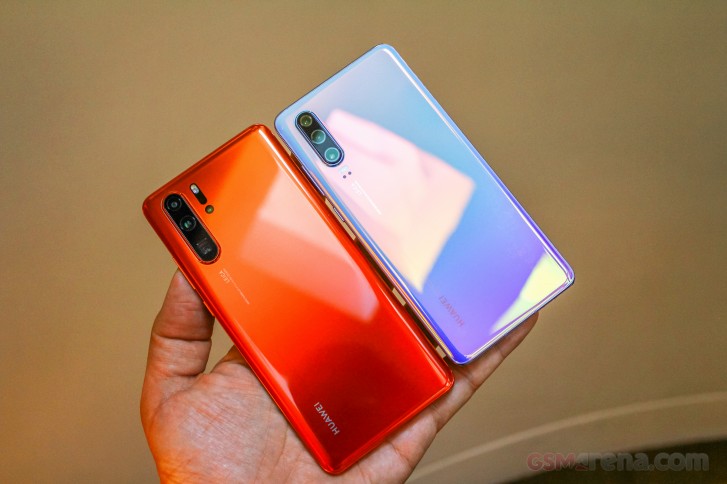 Huawei P30 Pro in Red and P30 in Breathing Crystal

The end of the periscope looks really cool, no two words about that. You are not seeing the actual sensor through that hole but the prism at the start of the periscope tube. The 8MP sensor itself sits about 1cm to the right and is positioned perpendicular to the other sensors.

Moving to the bottom we see that Huawei makes up for the lack of stereo speakers with a larger single unit at the bottom, next to the USB-C port. The hybrid SIM slot is also at the bottom. Unfortunately, the 3.5mm audio port is gone for good on all Pro models. 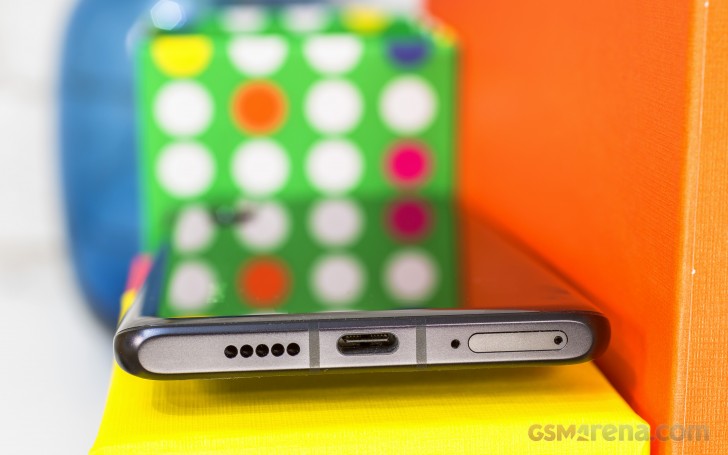 The frame is curved on its longer sides, but its top and bottom are flat. Yet, the P30 Pro cannot stand upright the same way some Xperia handsets of old did. 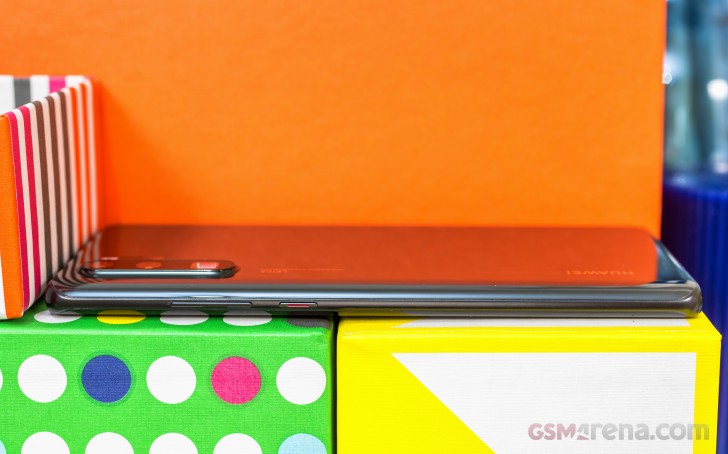 The P30 Pro may have grown in size since the P20 Pro, but it's hardly felt - because of all those curves it feels smaller and thinner than it actually is. The phone is waterproofed, and Huawei says the glass is scratch-resistant though it once again failed to name the supplier. 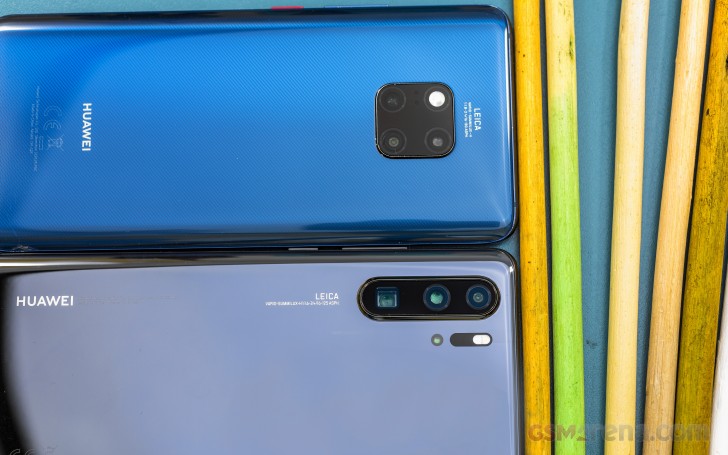 Still, the P30 Pro handling experience is typical of a 2019 flagship. The phone is slippery, and you have to be careful, but also, it's nothing short of stunning. Sure, we would have preferred the square camera arrangement from the Mates, but maybe it just wasn't possible with this new periscope lens. Plus we are sure many would disagree and prefer this setup instead. 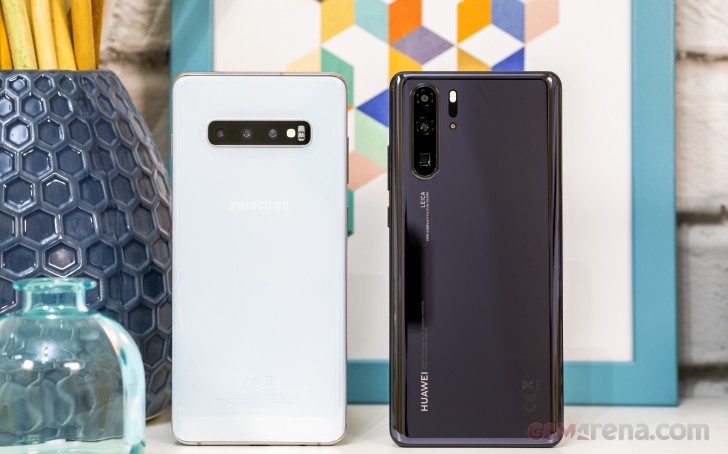 Why? If you haven't noticed or understood the trends (good or bad) so do most other type C connector phones so buy one with jack socket ...is as simple as that

But of course! Although each brand has its own photographic processing, nothing compares to the photographic treatment Huawei allows on its Leica lenses smartphones.