Huawei P30 Pro shows up in Sunrise Red, non-Pro model will have a 3.5mm jack

A new color has surfaced for the Huawei P30 Pro – Sunrise Red. It has a slight gradient to it going from red to warm yellow. 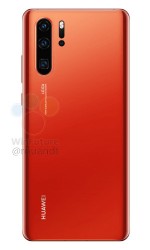 Previous colors we’ve seen are Twilight and Aurora, which have much more distinct gradients, plus the staple Black color. The Huawei P30 was also seen in Twilight, Aurora, Black, so there’s a chance it will get Sunrise too (unless there are a few exclusive colors for each model).

Anyway, there’s some good news to come out of these new renders as well – the P30 will have a 3.5mm headphone jack, the P30 Pro will have an IR blaster. Note that it’s either-or, neither phone has both.

Still, that’s an improvement over the P20 generation where the 3.5mm jack was absent completely (unless you count the P20 lite, aka Nova 3e).

I hate device without 3.5 headphone jack so I will not pay and a dollar to get one. Thanks for Samsung for the premium phones.

Sunrise red is so beautiful! Huawei does such a great job with the gradient colors. Definitely one of the best red colors on a phone I have ever seen.

Nice color but as always Huawei will disappoint us by not bringing it to nordics like they did with mate 20 X and green color of the pro version. Both of these not to be found in the local market. Btw I will be buying the phone because the battery...