It's that time of the year again - Huawei and its partner Leica are starting a new chapter in smartphone photography. The smartphone manufacturer also did much to improve the hardware on the front of its P40 flagships and it hit a new milestone in wireless charging speeds.

The Huawei P40 Pro takes inspiration from both the P30 and Mate 30, but surpasses them both in terms of features. Huawei's usual drive to perfect the camera is as strong as ever, but this year the company did much to improve the screen as well.

It calls it an "Overflow Display" with four curved edges, all sides sweeping down to the frame of the phone. Another notable change is move away from the wide notch and towards a smaller (if not really "small") pill-shaped punch hole. It houses the 32MP front camera (capable of 4K @ 60fps video capture), which finally has autofocus - we think that's vital for good quality selfies.

The 6.58" OLED panel supports 90Hz refresh rate. Its resolution is 1,200 x 2,640px. The P40 Pro features an in-display fingerprint reader that's 30% larger than before, so it's easier to hit (it's also faster). There's also an infrared face scanner on the front as an alternative method to secure payments.

The best feature on the Huawei P40 Pro is its camera hardware. The main camera features a 1/1.28" sensor - larger than even the Galaxy S20 Ultra's 1/1.33". It has 50MP resolution and a RYYB color filter. Huawei promotes Octa Phase Detection AF, which means that 100% of pixels support phase detection autofocus. The optics include Optical Image Stabilization (OIS) and an f/1.9 aperture.

Huawei retains the periscope design for the zoom camera from the P30. Its focal length is 125mm and has a 12MP RYYB sensor and OIS. Huawei labels this "5x zoom" but these can get a bit confusing, so focus on the millimeters instead.

We're not done yet. The ultrawide angle Cine Lens camera has a 40MP sensor and an 18mm f/1.8 lens. Also on the back is a 3D Time of Flight (ToF) sensor, along with a color temperature sensor.

P40 Pro's videography skills include 4K @ 60fps video capture. The Super Steady Telephoto Video feature is available to enhance the OIS. The ultrawide camera can shoot HDR videos and can boost ISO up to 51,200 in the dark. The phone can go slow with 4K time lapses and fast with 7,680fps slow-motion videos. 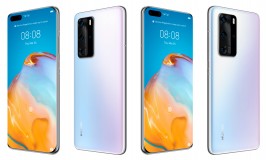 The Huawei P40 Pro is powered by a 4,200mAh battery. It matches the 27W wireless charging speeds of the Mate 30 Pro. The phone can also charge at 40W over USB-C as well.

P40 Pro's is dust and water resistant (IP68) and will be available in several colors: Black, White, Silver and Gold.

The Huawei P40 Pro will be available from April 7 starting at €1,000 with 8GB of RAM and 256GB storage. Storage is expandable, but you'll need to use Huawei's new NanoMemory 2 cards. Even though those cards take up one of the SIM slots, you can still have two lines active as the P40 phones contain an eSIM.

While you wait, you can check out our full Huawei P40 Pro review. As you can imagine, the camera section is particularly interesting.

Huawei made a choice about the size and shape of the screen on the Pro and not everyone will love it. The Huawei P40 serves as an alternative that costs less to boot. In previous years the non-Pro model always felt like the clumsy sibling that few people like but the P40 may change that.

It's more compact thanks to its 6.1" screen, the OLED panel is all flat (the glass above it is beveled, though). It has 1080p+ resolution, so it's close to the Pro in terms of sharpness. However, it misses out on the high refresh rate and offers only the standard 60Hz.

The main camera on the back is the same 50MP "Ultra Vision" module with the extra-large 1/1.28" sensor. The selfie camera has a 32MP sensor and but loses the autofocus feature (it is still capable of recording 4K video at 60fps). There's no IR face scanner on the front, but the phone does have that larger in-display fingerprint reader.

The zoom camera has an 80mm lens with OIS and an 8MP sensor, the ultrawide camera uses a 16MP sensor and 17mm lens. These are basically the same specs as the P30 and Mate 30 tele and ultrawide cameras.

Like the Pro, the Huawei P40 is powered by a Kirin 990 5G chipset. Besides the integrated 5G modem, this chip also has the advantage of the 7nm+ EUV process (the 990 4G is built on an older 7nm process). However, the Pro model has a 4 layer SuperCool system (graphene film + vapor chamber), which the vanilla P40 lacks.

The vanilla model has basic protection from dust ingress and water splashes, IP53.

The battery is somewhat smaller with 3,800mAh capacity and it's missing wireless charging altogether, relying only on 22.5W wired charging.

The Huawei P40 will cost €800 when it launches on April 7, there's only one memory configuration available - 8GB of RAM and 128GB storage. Again, you can add more storage if you get a NanoMemory 2 card.

We took the Huawei P40 for a spin, check out our hands-on review for more details.

Huawei is launching its new phones with Android 10 and its AppGallery. Today, the company announced new features and partnerships to expand its software platform and replace much of the Google-provided ecosystem.

MeeTime is a an voice and video call app with screen-sharing. It can also serve as a video streaming platform for other products, e.g. drones and action cameras, and apps (so it can be used for customer support, for example).

Celia is the new voice assistant that supports English, French and Spanish. It can handle anything from basic tasks (e.g. adding reminders, making calls) to AI-powered features like AI lens and AI touch shopping.

That doesn't make it a failure. Rog 2 offers a lot at much lower cost compared to both. Unfortunately they've all become stale and over priced.

Camera does not justify it prices agaisnt S20. S20 overall offers more for same price, plus no google service, I think P40 aeries are complete failure