Canalys posted its report on the smartphone shipments in Central and Eastern Europe in Q2. Between April and June 15.6 million units were shipped, with Samsung snatching a third of the market. At second comes Huawei with 12% and 1% more than Apple. Xiaomi jumps in fourth elbowing Lenovo, which settles for fifth with 5%. 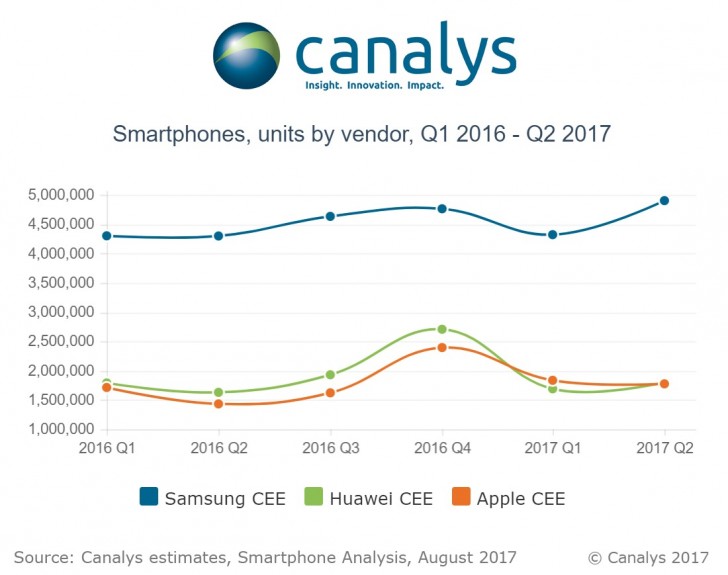 Boosted by high demand for Galaxy A and Galaxy J smartphones and their 2017 versions, Samsung shipped 4.9 million units, which is an increase of 14% year-on-year. Even though Galaxy S8 is a massive hit across Eastern European countries, some vendors may have overestimated the demand for Samsung’s flagship model.

Huawei managed to snatch back the second place from Apple after the Cupertino company held it in Q1 2017. Canalys analysts say that Huawei shipped 1.8 million units, which is 12% of the market pie, beating Apple by fewer than 50,000 phones. Its best-seller in the region was the mid-ranger Huawei P10 Lite. 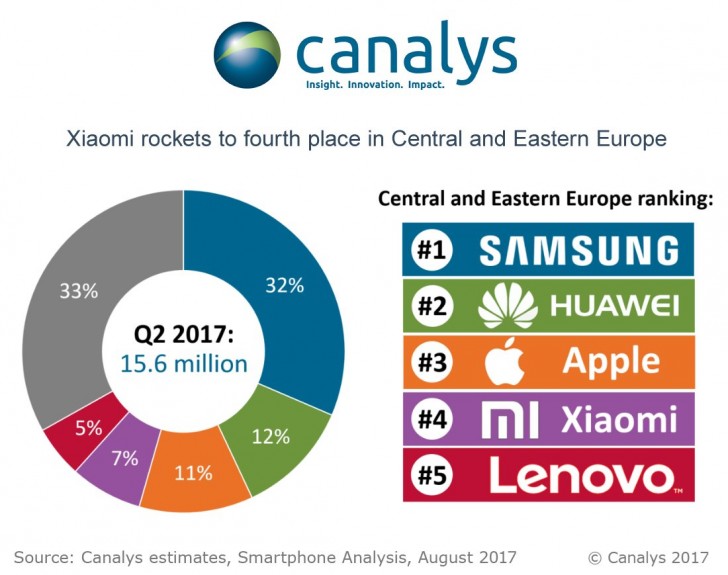 The surprise in this research is Xiaomi in fourth place. With 1.1 million shipments in just three months and 7% market share, the company wants to replicate Huawei’s rapid rise, according to Canalys Senior Analyst Tim Coulling. Xiaomi is relying on partnerships with local vendors like Media Markt, Media Expert, and Poland’s largest e-commerce platform Allegro.

Since the Central and Eastern European market is very price-sensitive, the company’s best-seller was the Redmi 4A, which moved 350,000 units in Q2.

Kantar: Samsung leads US market in Q2, but the two iPhones are the best-sellers

Im running a Xiaomi in Europe...no support, no LTE, but still happier than with any other phone ;)

Me by you need to check your eye sight. I am in EEU and pretty happy with Mi Max currently, happy enough to again purchase Xiaomi and much more happier then with both Samsung and Huawei-s I ever had. When Xiaomi establishes a good costumer service's ...