A render of the Huawei Enjoy 20 Plus leaked last week, which revealed the smartphone will pack a notchless display, pop-up camera, and a triple camera setup on the back. Today we are looking at another Huawei smartphone with similar design language - the Huawei Y9a.

One of our readers from Iraqi Kurdistan sent us a couple of images of the ad banners placed by Huawei in their shop, which reveal the Y9a's design and key specs.

As you can see, the Huawei Y9a packs a notchless display and features a circular camera bump on the back. But unlike the Enjoy 20 Plus, this one is home to four cameras, which is why the flash is placed outside the module in the top-left corner. The primary camera on the Y9a has a 64MP sensor, which is joined by one 8MP and two 2MP modules. 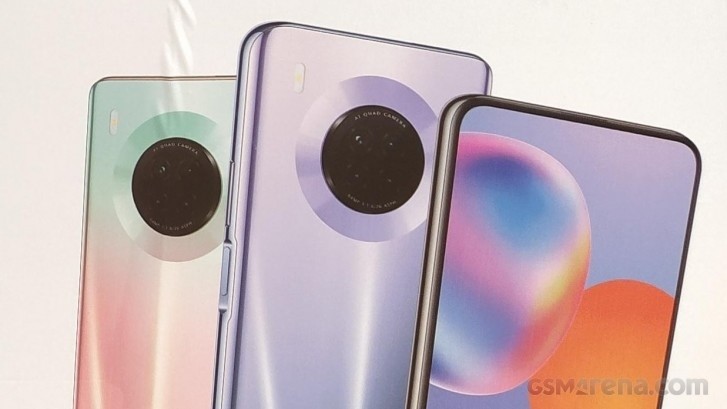 The Huawei Y9a will have 8GB RAM and 128GB storage onboard, but there could be other memory options as well. The smartphone features a side-mounted fingerprint reader, supports 40W SuperCharge fast charging, and will be available in two colors. And just like other recent Huawei smartphones, the Y9a won't support Google's services, and you'll have to rely on the company's AppGallery to download apps on the smartphone.

The rest of the specs of the Y9a are currently a mystery and there's no word from Huawei about the smartphone yet, but now that the company has started placing ads in retail stores, it shouldn't be too long before the Y9a goes official.

I love my Huawei but I won't buy a new one cause I really like using Google. I so damn used to it!!

I love Huawei very much! but,, I am so sad😢. Because can't get any Huawei update phone in Bangladesh.

Yes also I saw in Kurdistan and I was surprised 😅