Huawei is pushing for a new memory card standard – NM – but is it any good? Benchmarks show that the cards perform on par with their microSD counterparts. They use the eMMC 4.5 protocol with an UHS-I U3 speed rating, promising peak read speeds of 90MB/s and sustained write speeds of 30MB/s.

That’s theoretical, here’s what you can expect in practice based on the numbers by Hi-Tech:

Copying a 6.7GB file took 1 minute 33 seconds, that’s 72MB/s. Note that a 128GB NM card was tested (user-available capacity is 123.73GB after formatting). Currently that’s the only capacity available, but 256GB and 64GB models are coming (all manufactured by Toshiba for now). 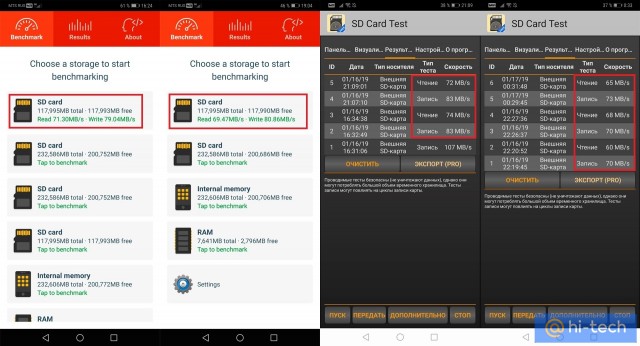 Only four phones support the standard, the four Mate 20 models, though there are probably more on the way. There’s a USB adapter if you want to browse one of these cards on your computer, but they are not nearly as ubiquitous as SD readers.

Huawei Mate 20 Pro gets 109 overall score in DxOMark, tied with another Huawei phone

I am in favour of the new NM standard

Anyone any idea how many read/write cycles?