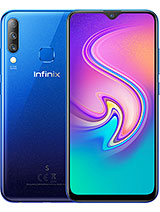 Joel, 03 Sep 2019That's because that p22 is not powerful. Most people think ... moreRam is mainly used when it comes to multitasking, that is opening more than one page at the same time.

Victory , 04 Sep 2019I just reboot my infinix S4 the torchlight was on, I cant s... moreVery good phone and the phone has a very good performance and a long lasting battery am enjoy the phone is one of the best

Suleman, 05 Sep 2019i purchased Infinix s4 6/64gb but downloading speed is ver... more I disagree with you S4 Is a good phone. Maybe it the network you are using that slow. I have customer who are using the device and I have not reported any issue

I just reboot my infinix S4 the torchlight was on, I cant see anything at the screen and when I call the phone it still rings and the phones torch is still on till now but can't see anything can't use it

Mimank, 28 Aug 2019The Tagline is S Series, main focus is selfie not for heavy... moreThat's because that p22 is not powerful. Most people think RAM is what makes a phone run faster but they are totally wrong. I stopped buying infinix because they are greedy bastards. Helio p60 would have done a better job but they don't use it. Always using poor chip set/processor.

Hussain01, 23 Aug 2019Pls i would to like to ask, with my infinix s4, if i switch... moreThe phone is on but I can't unlock it and I did not see anythings but if someone call me I can pick I can't use the phone

Uju, 29 Aug 2019Pls don't buy it its a bad phone, the battery doesn't last,... morebut you will see something dere before saying it

Uju, 29 Aug 2019Infinix S4 is a very bad phone, and a waste of money, bad f... moreguy.....
the phone is cool, whoever says the battery or camera isn't good bought a fake one...
also it depends on what you use it for.....you can't play heavy games and put on an LTE data connection and listen to music at the same time and expect the battery to last you 2 days, Bro...... you're just killing your battery life.....

Anonymous, 25 Jul 2019plz tell me something special about infinix s4.8 want to bu... morePls don't buy it its a bad phone, the battery doesn't last, the front camera is bad, it has nothing special.

Infinix S4 is a very bad phone, and a waste of money, bad front camera, using squad light its so bad i feel like crying, battery can't even last a day if u r on line. This phone is a scam

okay, recently bought the S4 and is all good for me.

Preshious, 23 Aug 2019Even with the 6gb ram the phone still lags... When using ... moreThe Tagline is S Series, main focus is selfie not for heavy gamming :). Not too expensive thats way using helio P22 :)

Anonymous, 27 Jun 2019What are you talking about.i used Infiniti note 2 for 4 yea... moreWe must have bought it same time, I have used Infinix note 2 for 4years and the phone is still working OK

I just bought the S4 infinix phone 5 days ago and set the pass word but couldnt unlock it back and I decided to flash it,instead of it to come up on but couldn't.so what should I do to make on. Thanks

Please I need help!!
My infinix S4 is relatively new but in the past few days have given me problem.
All the apps keep crashing and the system update is not successful.
I did factory reset but no difference.
Please help

What about system update