iPad Pro 11 gets put through scratch, burn and bend testing 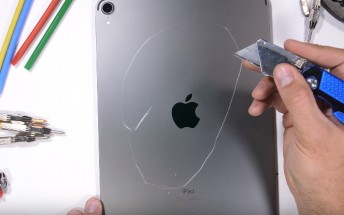 Apple recently launched an entirely redesigned iPad Pro line, in two sizes - 11" and 12.9". The smaller of those has now undergone the usual durability testing from YouTube channel JerryRigEverything.

It's unusual for Zack to do this for a tablet, but the results are very interesting nevertheless. The iPad Pro 11 costs about as much as an iPhone XR, so in the grand scheme of Apple's devices it's quite reasonably priced.

However, it seems like the company spent all of its focus on making it as thin as possible and forgot to add in some structural stability as well. While the tablet's screen is covered by glass, it's very thin. As for the bend test - sure, you're probably not going to fit an iPad this big in your pants' pockets, but you might inadvertently sit on it while it's on a couch or something.

And it that case... spoiler alert - prepare for the worst. The new Apple Pencil comes apart pretty easily too, with its weakest point being right at the center. So the bottom line is this - if you buy a new iPad Pro and an Apple Pencil to go with it, make sure you're careful with and around them.

Doubt it he/she was referring for kids, other than having kids around who would eventually grab hold of the ipad w/o you noticing it. And no! A case wont cut it, whats the point of showing off your thin and brittle aluminum ipad with a case?

Good luck bending a 5mm slab og aluminium that isn't super soft. It doesn't take much to reinforce this tablet, there's no excuse for it so please stop your apologetic behavior on apples behalf. The point of a thin tablet/phone is lost whe...