EISA - the European Imaging and Sound Association - announced its 2009-2010 awards for mobile devices and greenness. More than 50 prominent tech magazines from all over Europe got together to judge this and here are the results.

The European Camera Phone award was snatched by the Samsung i8910 Omnia HD. If you thought the Samsung Pixon12 was a sure-win - EISA was looking at overall performance, and 8 megapixels of still resolution and 720p/24fps video were enough to nail it. The 3.7" 360x640 pixels AMOLED screen was also noted among the phone's strongest point.

The European Music Phone is… the Sony Ericsson W995. EISA looks at not only combining the most desired and technologically advanced features but value for money as well, things most likely to be appreciated by enthusiastic public. It seems this is what tipped the scales towards the W995.

The European Business Phone award went to the Nokia E75. We guess the E71 would have felt right at home the the top of the ladder in this category as well, but we guess technically it's not a 2009 model and the Nokia E75 was noted as extremely well designed and capable of fulfilling all communication needs. Robust build quality and long battery life were also major factors in the decision.

The European Smartphone award may be a surprise to some - in this category the iPhone, and more specifically the iPhone 3GS, is King Kong standing on the Empire State Building, with countless of other phones buzzing around it while trying to shoot it down. Try as they might, the "iPhone-killers" still have a way to go, as the iPhone still clutches the beautiful maiden of user-friendly, simple but sleek UI. According to the EISA, the 3GS is a huge leap forward, even if it doesn't seem like it at first glance. 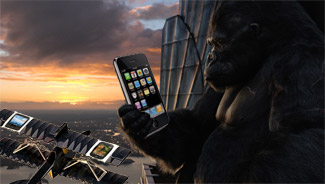 The ever-growing importance of companies becoming eco-friendly also got a nod from EISA, and while there were plenty of eco phones that were either light-weight versions of normal phones (mostly in packaging) or low-end phones, the LG KM900 Arena won the European Green award by being the "greenest fully featured mobile phone on the market today". The retail package is said to be the best in terms of eco friendliness as were the build components of the phone itself. The emphasis seems to be that "feature-rich" and "green" can fit very comfortably in the description of one phone, no compromises necessary.

Sure, some people won't agree with these awards. The iPhone platform for example was patted on the back for having its smart function upgraded. Indeed those were just holes in the core functionality that begged for plugging for quite some time now, but Apple have done a nice job in updating the software platform to a more mature level.

If you're interested, you might as well check out last year's EISA awards and see what we were up to last August.

EISA Awards 2010: which are the best of the best phones in Europe

cmon, w995, omnia... any phone has better specs (yeah, apple store can be countered by mobile9.com) "You now can share your iPod music files via Stereo Bluetooth to your hi-fi equipment at home, or headphones, assuming that these too incorporate a St...

Unlike last year, this time the awards really hit the spot. The Omnia and the iPhone really deserved it. I believe that what makes a smartphone great is the option of adding new features, and the iPhone clearly allows that, even if it failds at other...