iPhone 6s and iPhone 6s Plus feature 2GB of RAM 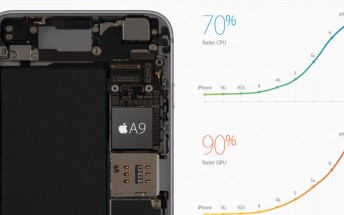 As is usually the case with iPhone and iPad announcements, Apple stayed mum about the amount of RAM that inside its latest products. Now, we don't have to wait for teardowns to reveal this information thanks to an Apple Support employee.

He has revealed in a Reddit thread that the iPhone 6s and iPhone 6s Plus come with 2GB of RAM. This was also continuously suggested by rumors months prior to the unveil.

The rest of the iPhone 6s and iPhone 6s Plus internals include the latest Apple A9 64-bit chip with updated graphics and CPU performance. The details surrounding the CPU and GPU of the chipset aren't available yet.

Hours ago, the iPad Pro was discovered to boast 4GB of RAM, courtesy of Adobe promotional blog post. This is the highest amount of RAM Apple has put into any iDevice so far.

I'm having a hard time thinking of ANY Android phone that uses >3GB other than the Note 5, and as a Note 4 owner, I'm not going anywhere. 3GB is plenty but necessary, you're right ...brute force to make 'Android' a fluent operating system. Doublin...

Samsung's past is Apple's future!