The iQOO 3 5G arriving on February 25 passed through Geekbench last week, confirming key specs in the process. Now, this 5G smartphone has appeared on AnTuTu scoring 597,583 points, which is the highest score a smartphone has achieved to date on this benchmark platform.

iQOO previously confirmed a few specs of the iQOO 3 5G, which include Snapdragon 865 SoC, quad rear cameras with a 48MP main unit and UFS 3.1 storage. Now one of the recent posters shared by the company reveals the smartphone will come with LPDDR5 RAM and Wi-Fi 6. 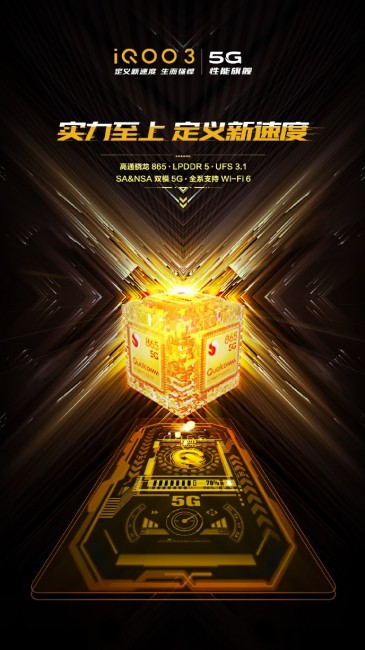 The company's Indian branch also posted a video on YouTube revealing the iQOO 3 5G will pack a 4,440 mAh battery with 55W Flash SuperCharge support, which will juice up the cell from flat to 50% in 15 minutes.

In a separate video, iQOO India teased the smartphone's 5G compatibility while also showing off the phone's back. You can check out the clip below.

iQOO hasn't revealed any other details of the iQOO 3 5G yet, but the smartphone appeared on TENAA with full specs, which you can check out here.

The iQOO 3 5G will be launched in India as well on February 25 and will be sold through Flipkart. The e-commerce giant has set up a page for the phone's promotion on its site and promises to reveal more about it on February 17.

iQOO 3 is also coming to India on February 25

The Lenovo scored over 600k+ on Antutu.. How is this the highest score with 597k?

Lol, when you love someone do you like all his/her traits?!... I am their biggest fanatic fan exactly because I know all the good and bad things, products, traits and see the overall awesomeness and conception of the company, just like the love must ...

You said you are that company's fanatic but not happy with their own products? Ah what a hypocrite clown we have here