iQOO announced the iQOO Z5 last month and now it is set to add a new member to the lineup on October 20, dubbed iQOO Z5x.

iQOO hasn't detailed the Z5x' specs sheet yet, but the poster it shared on Weibo reveals the smartphone's design. It has a rectangular camera island in the top-left corner housing a LED flash and two cameras, with the primary unit using a 50MP sensor.

The smartphone's right-side frame has a volume rocker and power key, which will double up as a fingerprint reader for biometric authentication.

There's another image on the event page set up on vivo's official website, which reveals the Z5x will pack a 5,000 mAh battery and have two color options. You can also see that the smartphone has a USB-C port at the bottom, flanked by a speaker and the 3.5mm headphone jack. 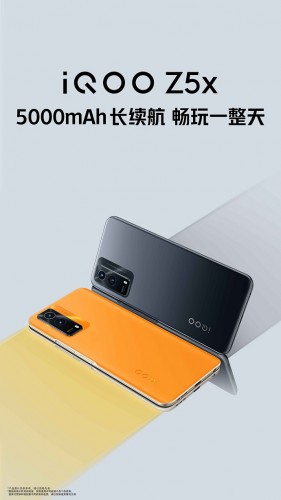 You can expect iQOO to reveal more about the Z5x in the days leading to the official unveiling next Wednesday.

It should come with the amoled display

They might use a dimensity processor to this one