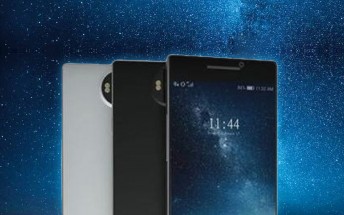 File this one under “highly doubtful”, but JD.com (the biggest e-tailer in China and Nokia'a exclusive partner for the Nokia 6 launch) put up a listing for the Nokia 8. Fool us once... The 3D-render in particular seems more like a fan-made concept.

Still, the price of CNY 3,188 (around $460) seems about right as the Nokia 6 goes for CNY 2,300 or so. Currently, the JD page shows only the most basic specifications - an Android phone with a metal frame and LTE connectivity.

Update: As many in the comments pointed out, this image is from the following video by the Concept Creator channel on YouTube.

Some hard to verify rumors point to a 5.7” Super AMOLED screen (QHD resolution), 24MP main camera with OIS and a 12MP selfie shooter, a high-end Snapdragon chipset and plenty of storage.

Nokia will bring the 3 and 5 to the MWC, so it may be too early to have specifics on the flagship model, let alone put it in online stores.

Global variant of the Nokia 6 gets certified in Taiwan

My only Big request to nokia is that, PLSSSS Do NOT make sad & dumb looking phones that you all did it with Windows phone.

I hereby that HMD is producing Nokia 3310 again with a few changes,Poor Nokia one time Microsoft plays with the Name like a toy and toss it up and down then pass it to HMD and HMD shoots it like a soccer ball,Nokia 3310 was great but how about Sony r...