Rumors about a Moto Z4 Play have been circulating for months, but now we have a plot twist – leaked Moto Z4 promo materials describe a very similar phone with mid-range specs.

According to that leak, the phone have a Snapdragon 675 chipset, same as the Z4 Play, instead of a flagship 800-series Snapdragon like the Moto Z3. The promo materials claim the price will be half of what flagships cost, which solidifies the mid-range status of the phone.

Both models are rumored to have 48MP rear cameras, single cameras by the sound of it. The vanilla Z4 will have a 25MP selfie camera. Both rear and front cameras will switch to pixel binning in the dark to deliver 12MP and 6MP photos, respectively, with improved quality. 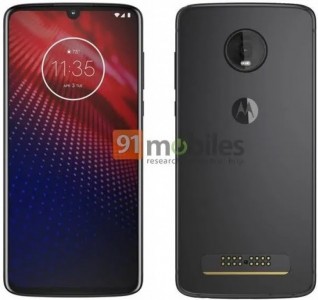 Is it possible that rumors mixed up the Moto Z4 and Z4 Play? We'd say it's likely - so far there's only one difference. The Moto Z4 will reportedly have a larger screen than the Play – 6.4” vs. 6.22”.

That aside, similarities continue. Both screens are reported to have in-display fingerprint readers and teardrop notches. Batteries are the same too, 3,600mAh capacity and 18W TurboCharge support. The 3.5mm jack will live on for another year.

The Moto Z4 will be a 4G phone, but will support the 5G MotoMod for those who want to try out the next-generation mobile networks.

it should have 2 rear cameras at least