Last month vivo spilled the beans on a few of its interesting ongoing projects and upcoming products. Chief among these was the company's first commercial 5G phone, expected to launch under their iQOO brand as the iQOO 5G. 5G buzz-words aside though, the thing that got most of us excited at said event was the extra info on the company's eagerly-anticipated 120W fast charging technology. Putting two and two together, it really seemed like vivo FlashCharge 120W would make its debut on the iQOO 5G. 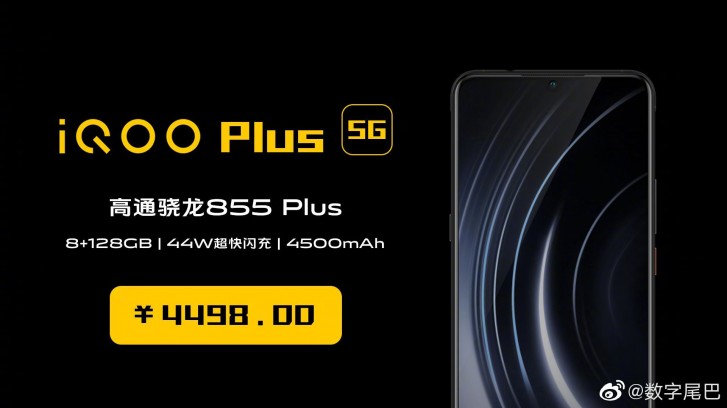 A freshly leaked banner, however, kind a throws a curve ball our way with its confusing collection of info. First off, it refers to a phone called the iQOO Plus 5G. This could theoretically hint at a regular and a "Plus" version of the upcoming iQOO flagship. Reading on we also see a clear mention of 44W, followed by a text that roughly translates to "ultra fast flash charge". So, the same standard present on the current vivo iQOO. If this is indeed correct, then the coveted 120W charging tech might not be part of the upcoming vivo phone or phones release at all. This is especially true if we decide to subscribe to the theory that there is a vanilla and a Plus version in store. And if 120W is not present on the Plus one, then it clearly won't be coming to its vanilla sibling either.

It's not all bad news, though. The banner also clearly mentions a Snapdragon 855+ chipset, which is the latest and greatest Qualcomm currently has on offer. Also a beefy 4,500 mAh battery. These are paired with 8GB of RAM and 128GB of storage and the whole configuration will apparently retail for CNY 4498 (about $655). Not too shabby!

No word on launch date or availability yet, though. Also, as always, since this is a leak, you should take it with a grain of salt.

Source (in Chinese) Via

RIGHHT...why is no one amazed by that

JUST 44W!? Good God guys, don't make it sound like 120W was right there without the fact that the FCC and Chinese certs are probably scared to death of the electrical output on that. Anywho, I'd be interested but IQOO hates the US (in terms of L...