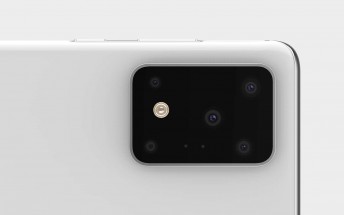 If youre not a fan of the Galaxy S11+ camera as seen in renders, you may be glad to hear that Ice Universe claims they are inaccurate. The leakster is regarded as knowledgeable in the matters of Samsung, but does have logic on his side too.

The S11 is supposed to have a 5x periscope zoom camera and all periscope designs weve seen so far have a rectangular aperture. This allows more light to reach the sensor (which is similarly rectangular), so its unlikely that Samsung will switch to a circular lens.

But thats not what the renders show  they show multiple circular lenses and no rectangular ones. To be fair, thats a small detail to get wrong, but still.

The leakster claims that the real design of the Samsung Galaxy S11 camera island will not be so messy, presumably based on insider knowledge on the subject.

Note that the render above (allegedly) depict the Galaxy S11+. There are also renders of the Galaxy S11, which show a more orderly camera, though its still not what you would call symmetrical.

My name is jeff and i dont like this

Then Samsung (and others) copy Huawei gradient color design