LeEco and Coolpad are working on Snapdragon 821-powered Cool 1S

LeEco and Coolpad are jointly developing a new smartphone, according to the latest leaks out of China. So far, the two companies have outed two such devices - first, the Cool1 Dual, and then the Cool 1C. In fact, the latter got official just last month.

Unlike the Cool1 Dual and the Cool 1C however, the upcoming Cool 1S will be a true flagship handset. The image you can see on the left below supposedly shows it in black, a color that's become more and more fashionable since Apple's gone the Matte Black and Jet Black route with the iPhone 7 and iPhone 7 Plus this year. 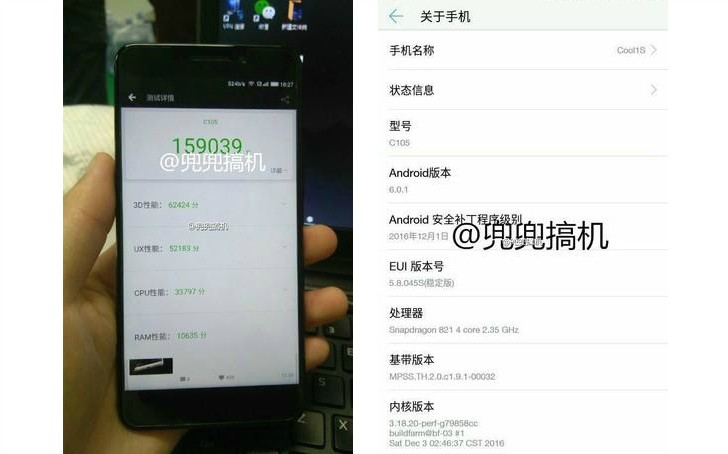 The Cool 1S will have the Qualcomm Snapdragon 821 chipset at the helm, as revealed by these leaked screenshots. The phone will run Android 6.0.1 Marshmallow underneath LeEco's EUI 5.8. Not long ago we've seen a Cool-branded smartphone passing TENAA certification with a Snapdragon 821 on board, so we assume this could be the Cool 1S. If so, expect the phone to have a 5.5-inch 1080p touchscreen, 4 or 6GB of RAM, 32, 64, or 128GB of storage, a 16 MP main camera, an 8 MP selfie unit, and a 4,000 mAh battery. It should be offered in gold, white, silver, and blue alongside black.

Pricing is still a mystery, but given the specs don't expect this to be anywhere near the Cool 1C's $130 level. Also unknown is when the 1S will become official, but that's obviously going to happen within the next few weeks.

He's so dumb ??? He bought Vizio TV to get a foothold in the US

I hope this device comes with expandable storage capacity

Of course they are dumb. Their founder is a mere billionaire just like Elon Musk. At least Elon Musk is smarter at business.