The Le Max 2 comes in a big box, which hides a few surprises - some nice, some not quite. To start with, a Quick Charge 3.0 enabled A/C adapter is much appreciated. A USB Type-C cable is supplied too.

However, with or without a 3.5mm audio jack, a headset would've been welcome. At the very least, LeEco did well to provide a compact USB-C-to-3.5mm adapter.

The retail package • putting the bumper on

And finally, there is a nice transparent silicone case to protect the sides and rear from scratches.

If we compare the Le Max 2 to the Galaxy S6 edge+, which also comes with a 5.7" display, the Samsung handset cuts 2mm off of each side and 1mm of the thickness. The S6 edge+ weighs 33g less though, with that dual-glass design and smaller battery.

The LeEco Le Max 2 hasn't done anything too crazy design-wise if we don't count the conspicuous accents at the rear - and the pink paintjob. It may as well be rose gold for all we know. The design is based on the original Le Max, using a massive metal unibody with antenna cutouts.

The Le Max 2 is leaning towards slightly more angular looks, while the mirror finish of the fingerprint sensor and the enormous camera are far from subtle. Following a rebrand, the first generation and the Le Max 2 have different logos, of course. 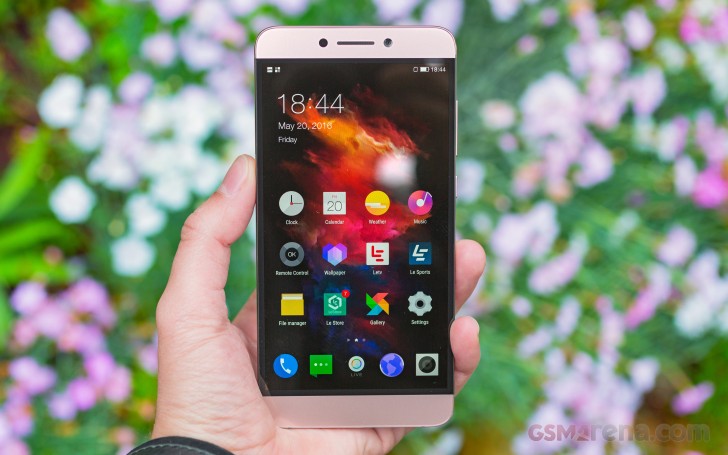 Anyway, LeEco went for a market-approved phablet design instead of trying to be unique for its own sake. Some design decisions are questionable - like the missing audio jack - but other than that, the build quality is excellent.

The metal design is as premium as it can get and the Le Max 2 is extra solid. Obviously a handful, it allows a comfortable grip and the subtly chamfered edges are stylish. The bottom grilles for the loudspeaker and the mic are nice.

We are not too fond of the massive camera module at the rear and the fingerprint scanner's mirror finish is also too prominent. The unmarked capacitive keys at the front may take some time getting used to. Even though they light up on tap, there's no indication which is which before you've tapped them.

The Le Max 2 is a 5.7" phablet but one that handles fairly comfortably. The device can be operated with just one hand in certain conditions, but most of the time it takes both. It's not as bulky as the Xiaomi Mi Max though, for a recent reference.

The earpiece above the display is flanked by the usual sensors and the 8MP front-facer. Below the screen are the three capacitive keys, which lack any meaningful markings as we already commented.

The earpiece • you can't see the capacitive keys

The left side of the Le Max 2 houses the lone dual-SIM tray. The right one has the volume rocker and the power/lock key, both made of metal.

The IR blaster is on the top side of the phone, while the USB Type-C port, the primary mic and the loudspeaker are at the bottom. There is no audio jack - LeEco have provided an adapter in the bundle.

The 21MP camera lens is on the back, enjoying plenty of space on a massive hump. The dual-tone flash is around as is the secondary mic (set within the top antenna strip).

A peek at the back

My Le eco phone won't pick up cellular service unless the wifi is on.. someone please help me

This device is lit AF. When you buy, it doesn't have voLTE. Type c headphone will not work after some days. VoLTE be enabled after eui update 5.9. Then you cant use BHIM upi or google pay just because you have lost the device verification from Googl...