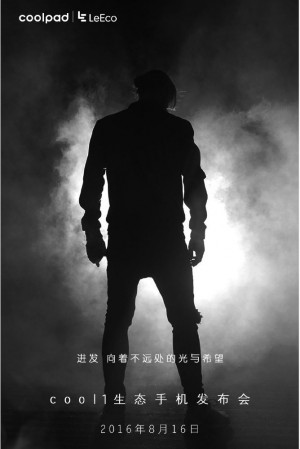 LeEco and Coolpad have been working closely on a flagship smartphone. The first teasers have been appearing over the last couple of weeks and have yet to confirm any specs.

What the teaser did confirm though is that we can expect some kind of dual-camera system to be featured on the smartphone.

The event will take place on August 16 in China and will announce the “LeEco Cool1”, a high end smartphone whose rumored specs include a Qualcomm Snapdragon 820, 5.5 inch QHD screen, 4GB of RAM, 64GB of internal storage, a fingerprint sensor, Android 6.0 Marshmallow running under LeEco’s EUI skin. There’s also a 3,500mAh battery powering the unit.

There is still no pricing or availability information out there, so that’s something to look forward to finding out after the press event in just about a week from now.

looks like the "cool" tag and the image shadow are indicators for a new game station 1. the one (1) in the "cool1" refers to the first device at this series. and my prediction is an associations with relevant players at this field: Loghit...

After the hardware, the user experience on the software level is what matters the most and to provide the user experience, both LeEco & Coolpad should collaborate to make their own custom ROM which will be packed with feature and have some nice d...