LeEco (formerly LeTV) is holding a product launch event towards the end of this month (June 29 to be precise) in Shanghai, China. This was revealed by the Chinese company in a teaser. 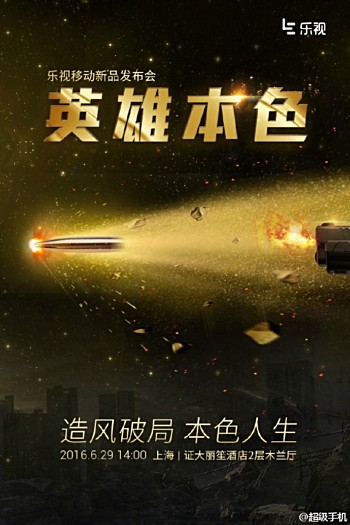 While the teaser doesn't reveal anything about the star of the event, reports say the company will be unveiling a new flagship smartphone. And it won't be just another flagship - the phone in question is said to be the world's first Snapdragon 821-powered device.

Now, in case you don't already know, Qualcomm has reportedly already renamed SD821 to SD823. So by that logic, these new reports are inline with a rumor earlier this month that said LeEco will out a Snapdragon 823-powered smartphone in June.

Moving on, other rumored specifications of the handset are worth mentioning as well, including a whopping 8GB RAM, and a 25MP rear camera unit. Now, these are inline with another recent rumor that even revealed the device's price: CNY 3,000 ($455/€€405).

If you recall, it was LeEco that launched the world's first SD820-powered phone, so we just can't dismiss the latest rumor as just hot air. But still, none of these have been officially confirmed either, so take all this with a pinch of salt, at least for now.

If you move on to something else (in this case 8gb RAM) before properly utilising the predecessor (6gb RAM) then 'skipping' is perfectly acceptable. Don't lecture me on my own language.