Lenovo K10 Note and Lenovo A6 Note are official in India, Lenovo Z6 Pro tags along

Lenovo India had a huge event today, unveiling two new affordable phones - Lenovo K10 Note and Lenovo A6 Note. The duo was accompanied by the Lenovo Z6 Pro that already appeared at the official company store in the Eastern European country of Bulgaria.

All three phones will be available on Flipkart, starting mid-September with plenty of cashback offers and pre-paid plans with Jio and Cleartip.

The Z6 Pro is undoubtedly the 2019 company flagship. The manufacturer went all-in with the specs - Snapdragon 855 chipset, up to 12 GB RAM and 512 GB storage, however, Indian fans will get only the 8/128 GB option.

There is a 48 MP camera on the back, flanked by a telephoto lens and an ultra-wide-angle shooter, and there is also a dedicated 2 MP video camera and a ToF sensor.

We’ve already reviewed the phone and were left with mixed feelings. It is a lovely phone for the upper-midrange price segment with all the specs but comes with ZUI on the inside, which might be great on Chinese soil, but multiple pieces of research revealed the Indian fans prefer clean Android.

The K10 Note is the more intriguing of the two new phones. It is the global name of the Lenovo Z6 Lite/Youth and brings a Snapdragon 710 chipset and a 6.39” LCD screen with Full HD+ resolution. There are two memory options, available to the Indian audience - 4/64 GB and 6/128 GB, with microSD slot available in the tray, next to the two SIM slots. 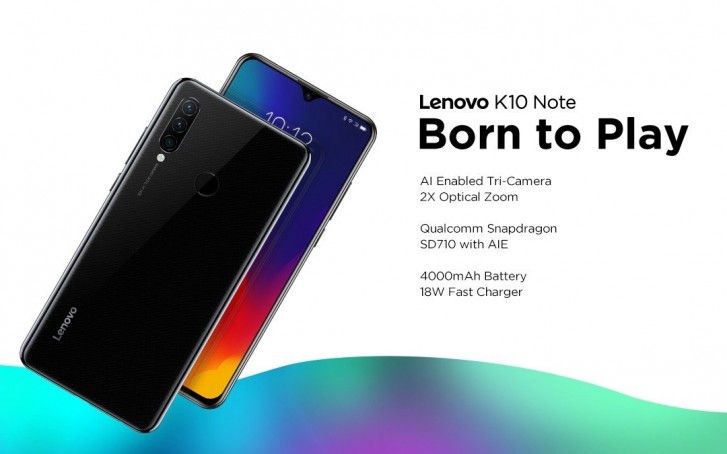 The main rear camera is 16 MP and it is coupled with an 8 MP telephoto lens and a 5 MP depth sensor for portrait shots. The selfie shooter is 16 MP as well. The battery of the phone is 4,050 mAh and comes with 18W fast-charging capabilities, thanks to the Qualcomm chipset.

The Lenovo A6 Note is an entirely new smartphone, aimed at the low-end Indian market. It has pretty basic specs that should do the job - Helio P22 chipset, 6.1” screen with HD+ resolution and a waterdrop notch.

The SoC is coupled with 3 GB RAM, storage is 32 GB and is expandable with a microSD slot in a long tray that also can house two SIM cards, similar to the Lenovo K10 Note. 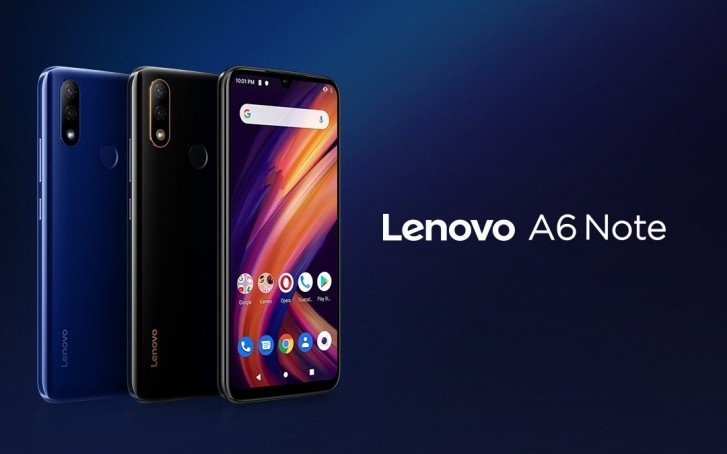 There are two cameras on the back, lined up vertically. The main sensor is 13 MP with a 5P lens, while the second is a 5 MP depth cam. The front-facing selfie shooter is also 5 MP. Battery-wise, the Lenovo A6 Note arrives with 4,000 mAh battery, but it has regular rates of charging.

Lenovo priced the phone at INR7,999 ($111/€100). It will be available on September 11 in either Blue or Black, with the latter having neat golden accents around the camera setup and the logo.

Lenovo A6 Note is great as a budget smartphone. Good camera and smart MediaTek processor.

lenovo comes with more features and camera quality..which is beat the 1+ and redmi k20 and many more. this phone is best compare to last models.. for the high protection of lenovo phones..recommended for the back cover which is available advance on H...

If they allow bootloader unlock, it would be a great competitor to the poor Oneplus 7.