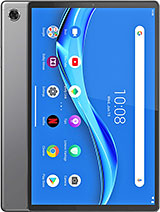 Anonymous, 03 Dec 2020People commenting about the battery size, that is the gen2 ... moreTha ks

can I use a pen on this model

People commenting about the battery size, that is the gen2 model, which is here: https://www.gsmarena.com/lenovo_tab_m10_hd_gen_2-10406.php

Please update this to indicate that battery is 5000mah. I bought this tablet on the basis of your spec (foolishly), and the spec is wrong.

Anyone have issues with the headphone jack? I bought the Wifi version 2 months ago and returned it because sound played through the plug-in headphones and the loud speakers at the same time. I bought a second unit and it has the same problem. Both units were new (not used).

Nice tablet. Paid 199 € for 64 GB flash mem and 4 GB RAM, TB-X606F (Wifi only).
Not stated but the USB C supports OTG. Tested to work with keyboard, mouse and USB flash-mem stick.
Specs here says no radio, but it does have FM radio.
Bought with Android 9, received update to Android 10 in 2020-11.
Features missing I would have liked: NFC, Galileo GNSS.

This tablet has an FM radio and it comes with the tuning software. Something must be plugged in the headphone jack to be used as an antenna. I use a 3.5mm extendable antenna and the tablet speaker to hear my local broadcast.

It lasted for 12 hours with 5% remaining. Very impressive!