Here we see Lenovo's logo on the front of the box. It's safe to say we'll be seeing it on all Moto devices from now on. Slide the box out of the packaging sleeve and you can lift the top half up, and we are greeted by the Moto Z Force.

Under the smartphone itself we find the SIM tray tool, the 30W Turbo Charger, the 3.5mm audio jack to USB-C adapter. There is also a rubber-esque "holder" for your wired headphones so that you can wrap your earbuds in to prevent them from getting tangled in a purse or pocket.

Keep in mind that this phone does not come with any cable to PC connection to transfer files and data. The 30-watt (wow!) TurboCharger does not have a removable cable. The wall charger and the cable form a single unit. You'll need to find another cable or USB-C to microUSB adapter to connect to your computer.

The phone does come with a default "style shell" or back plate which is used to protect the back when you are otherwise not using any Moto Mod. Moto will sell more of these style shells in different colors for about $20 each for fabric or 'wooden' materials. Genuine leather style shells will be $25.

The Moto Z Force isn't as paper thin as the Moto Z, but the Moto Z Force's added weight (about 16% heavier than the Moto Z) and thickness (about 25% thicker) are justified thanks to its beefier 3,500mAh battery. Even though the phone is thicker and could have featured a 3.5mm headphone jack, there still isn't one.

The Style shell included with the Moto Z is designed out of a faux-wood exterior which mimics wood grain pretty well from afar. This color of Style Shell is called "Charcoal Ash" and comes bundled with the Lunar Grey model. We highly recommend using the included Style shell when not using any Moto Mod as it contributes to the ergonomics of the phone in the hand.

Otherwise, the phone feels "blocky" just where the frame meets the rear panel. The transition between the two is quite sharp, and the Style shell helps to round it out a bit. The Style shell also (virtually) eliminates the camera hump on the back, protecting both the camera ring and frame from frequent contact with possibly erosive surfaces.

Moto Z Force in the hand

Gone is the dimple on the back which had many fans and was even rumored to be a rear-mounted fingerprint scanner at one point. The introduction of Moto Mods is perhaps the primary reason for putting the fingerprint scanner on the front as well as the reason for flattening out the ergonomically curved backside that has been around since the original (2013) Moto X.

The Moto Z Force's right side is home to three hardware keys. These are the only physical buttons since the phone uses on-screen navigation buttons. The placement of the buttons is quite new. They are pretty far up and may take some time getting used to. A nice touch is the grippy texture on the power button which lets you differentiate the keys by feel alone.

These keys are quite satisfying. No complaints here with the travel, clickiness, or their sturdiness at all. They aren't too hard to press or too soft to accidentally fire off. The volume keys even have a nice bevel that goes around them - a great touch for attention to detail.

The back side (without the style shell) doesn't look like it has a lot going on, but there's actually more to it than meets the eye.

Let's start from the top. There are two glass panels on the top and bottom ends of the phone which are there to let signals pass through for various antennas and connectivity features like NFC and Bluetooth.

The rear camera is here too, and it combines the dual-LED flash into the camera ring with the Verizon-Exclusive "Droid" branding just between the camera sensor and the flash. This is very nice as it's the only clue that this is a Verizon device (as the 'Droid' branding is exclusive to Verizon). There is otherwise no Verizon branding anywhere on the body of the phone itself, the Verizon logo appears in the boot animation along with the Droid branding, but there are no traces of red.

The metal back plate also features a pin-striped pattern, which we've never seen on other devices before and it gives our 'Lunar Gray' review unit a professional-looking and formal appearance.

The metal backing is really hard to keep clean from fingerprints, though. We think Lenovo should have gone for a different colored Moto 'batwing' to let it stand out more. But Lenovo feels you'll be carrying it around with the included snap-on style shell which has a better contrasting batwing.

The lower backside of the phone has a bunch of pogo pins, connectors, and magnets which allow the handset to expand its functionalities by simply snapping on a Moto Mod magnetically. The Moto Mods we tried fit perfectly and the magnets are quite strong and keep them in place quite well.

The left side is empty, there are no buttons or trays. Moving onto the top and bottom edges of the phone, the top houses a noise-cancelling mic and the nanoSIM/microSD card tray while the bottom only has a single USB-C cable. Remember, there's no 3.5mm headphone jack anywhere, but there is an adapter included if you want to plug in your more expensive, noise-cancelling headphones during a long flight.

Finally, we arrive to the front of the phone. It has the same motion sensors around the display like the Moto X had - wave your hand over the phone, and Moto Display will show you any missed notifications.

Then there's the beautiful 5.5-inch QHD AMOLED screen, two microphones at the bottom (there is a total of four around the phone for improved listening of the Moto Voice commands).

On the downside, the display glass seems like it's made of plastic. Upon closer inspection, you can see some of the waviness of the display lens' reflections. The Moto Z doesn't have this wavy look because its display isn't shatterproof so it's actual glass.

The earpiece over the screen doubles as the loudspeaker, and this is the only speaker on the phone.

Then last, but not least, there's a 5MP selfie camera with a corresponding LED flash on the opposite side of the earpiece. Remember, there's no LED notification since the phone uses the entire screen to display your notifications via Moto Display. 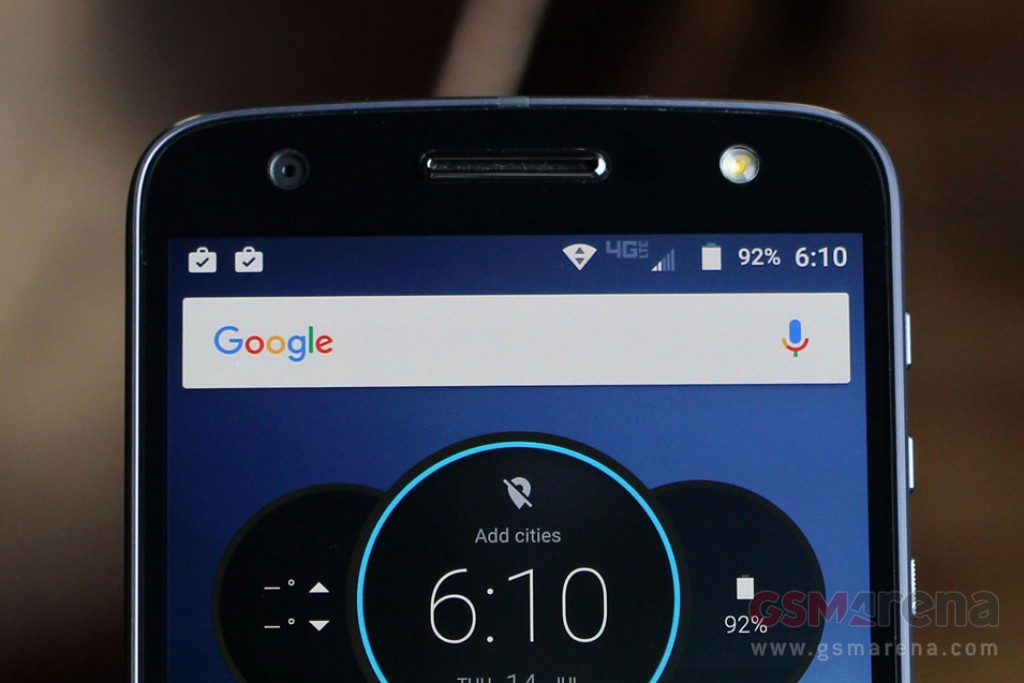 Here are a few shots of the Moto Z Force next to another 5.5-inch competitor, the Samsung Galaxy S7 edge, and the newly announced 5.7-inch Galaxy Note7. The Moto Z Force is larger than the Note7, despite having a smaller screen. Samsung really worked hard to shrink the Note7's footprint for a 5.7-inch display.

Moto Force is a great phone...BUT can't stay operable in cold weather. Took it to Yellowstone National park for Snow Mobiling but Phone kept cutting off. Tried to cut back on several times but Lenova boots up then shuts down. Can't find any spec's on...

I think using Bluetooth headset will do