The Lenovo P2 boots an Android 6.0.1 ROM, which comes off as pretty standard and clean out of the box. The second statement is true, at least on some level, as there is hardly any bloatware pre-installed on the handset. This is one of the Motorola influences on the main Lenovo line that we have definitely been enjoying since the acquisition took place. 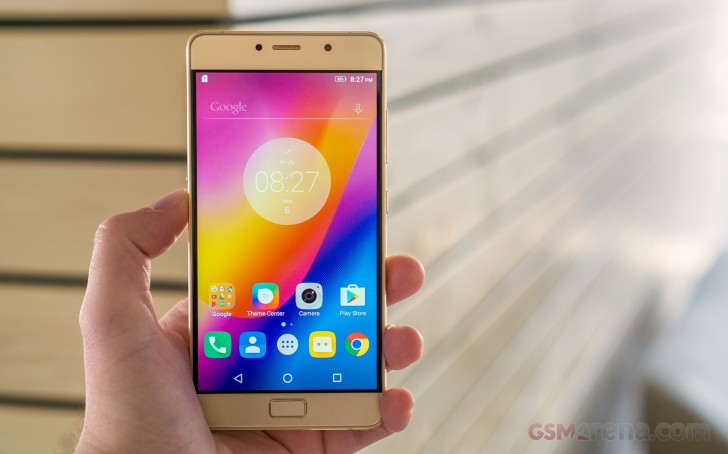 However, despite its AOSP appearance and snappy operation, looks are definitely deceiving when it comes to this Lenovo ROM, as there are a ton of added extra features under the hood.

Starting off on the lockscreen, as usual, it looks pretty standard. The fingerprint reader, we mentioned earlier can be put to good use as an unlock method. It's always-on, meaning that it would wake the phone as soon as you touch it with a registered fingerprint.

In our experience the fingerprint sensor worked fast but it wasn't as accurate as we would have liked. We found that you have to be mindful of the direction and position in which you rest your thumb over it or else it would fail the reading. Of course, your mileage may very.

Lenovo has adopted and enabled Android's default Smart Lock feature, which is not something you see every day. Through it you can set body detection, trusted places, trusted devices and even trusted voices and faces to control the phone's lock status.

The lockscreen also lends itself to quite a bit of customization. This is done through the Lenovo Theme Center and it is far from the only UI aspect you can tweak. Besides whole complete themes, there are also granular options for the lockscreen, wallpaper and even the base color scheme for certain built-in apps, like the dialer.

The latter can also be edited in terms of behavior, with two quite different answer and rejection gesture styles available out of the box. The task switcher can also go from the default rolodex style to a horizontal list with a single click. This is all very neat and in fact, the only thing that appears to be missing is an online theme store. There does seem to be a way to sideload themes though.

Surprisingly, there are a few more customization options worth mentioning. Inside the setting of the Lenovo P2, there is a strangely sounding menu called Feature. It actually houses quite a few powerful additions, which Lenovo has baked into the OS for added ease of use.

For instance, there is double tap to wake the screen, also a quick SnapIt (take a picture right away) shortcut - just quickly double press any of the volume buttons. And if you would rather quickly unlock to the camera viewfinder, double press the power key instead.

The fingerprint reader can also be used as a shutter control. The phone can even automatically lower its ringer volume when picked up - admittedly a fairly simple thing to achieve programmatically and yet, a hidden blessing when it is simply baked in.

Continuing the trend of easily achievable, but laborious to setup independently features - Lenovo has also thrown something it calls Smart scene in the mix. You can think of it as a sort of automatic profile switcher, like the ones that used to be quite popular in the pre-Android smartphone days and then sort of died off.

Actually, Smart scene is quite a bit more powerful and rather reminiscent of Tasker or IFTTT task automation apps. Scenes can be toggled based on a simple time table, or upon connection to a specific Wi-Fi network or based on a more advanced weekly schedule. The tasks that can be performed automatically include toggling airplane mode, Bluetooth, Wi-Fi, GPS, the data connection and brightness protection. You can also change your ringtone, per SIM card, no less and edit how loud it should be. Perhaps best of all, there is also the option to launch an app, giving developers and tinkerers a lot of power and customizability.

While in the Feature menu, we might as well cover a few other interesting extras the P2 has to offer. First, there is the Wide touch feature, which Lenovo Note fans should already be familiar with. It is a floating control overlay, which provides access to the basic navigation controls and some toggles and recently used app shortcuts. Better still, there are a total of three gestures the floating interface understands, which you can map to your liking.

As a proverbial icing on the cake, Lenovo also offers a dual app feature in its OS. It is pretty self-explanatory - enable it, add the apps you desire and then you can have two separate instances of them running concurrently. This is great for multiple social accounts.

Taking things to the extreme, there is also what Lenovo calls Secure Zone. The feature aims to provide you with a separate and secure second working environment, which is cut-off from the main one. This includes a separate launcher (although there is an interesting hybrid mode to experiment with, as well), separate app instances and files.

Finally, you can choose to hide the onscreen Android controls, and navigate your way through the OS with a tap on the button for Back and a full press down to go to the homescreen. We liked this nifty feature very much.

Moving on to the actual launcher, it is very clean and neat. Deceptively empty, as was already made clear, it is almost like the Google launcher, minus the Now pane on the left.

Notifications and quick toggles appear pretty standard as well. Just pull down once or twice, respectively to see them. Both, however, have a little extra to offer behind the scenes.

The toggles can be freely modified and rearranged, including changing the number of columns they appear in - also a rare feature.

You also get granular control over the notifications. There is a whole sub-menu devoted to that alone. You get powerful per-app and notification type control. There are also toggles for per-app priority and for hiding sensitive content from the notifications.

The menu keeps on giving with little things, such as the ability to hide or show notifications about captured screenshots or Bluetooth and Wi-Fi connection status changes. You can even edit the contents of the status bar and decide which icons to show and which to hide, just like you would on a Windows PC.

Last, but not least, there is the app locker. It is a rather standard side-scrolling affair. Still, you do get a couple of neat added features here as well, housed in the top bar. On the left, there is a convenient search bar and directly next to it, the OS automatically maintains a list of shortcuts to your most recently used apps in order.

Lenovo has really toned down the amount of bloatware it pre-loads on its handsets. For the better part, just like a recent Moto offers, the Lenovo P2 relies heavily on the familiar Google suite of apps to get through most common tasks. Let's see what come on top of those apps.

The Lenovo Companion is a mobile troubleshooter. You can search for walkthroughs for your device (in written or video form), you can check for firmware updates (with data back up included) and diagnosing all the hardware of the phone (e.g. testing the vibration or the loudspeaker).

SYNCit allows you to backup Contacts, SMS and Call log to the Lenovo cloud. If you don't want to set up an account, you can backup to the SD card.

There is also a SHAREit app. For the most part, it tends to work as advertised for exchanging files, as long as there are Lenovo handsets on both ends. Other devices can expect a various degree of success.

A proper File Manager, Compass, and Audio Recorder are available, too.

How can I take screen shot of this lenovo p2? Thanks in advance.

While Lenovo P2 was ok while working (battery was awesome) the issue grows when the monitor is broken. There is no switch on/off button and pressing button for more then 15.20 sec doesn't turn it off. So if we have for example an alert which goes...

I wanted to buy this phone but the price is going down so I decided to buy the P1 Turbo and it feels like the worse decision that I've done. Not because the phone is bad but the battery is as consistent as I wanted it to be. I just want to ask you a ...