The Lenovo Tab P11 Pro Gen 2 has a relatively clean and pleasing design that is aesthetically similar to its predecessor. The front has a slim, uniform bezel all around the display with curved corners. The back has the two tone finish, which is technically the same color but looks different due to the way both parts reflect light. 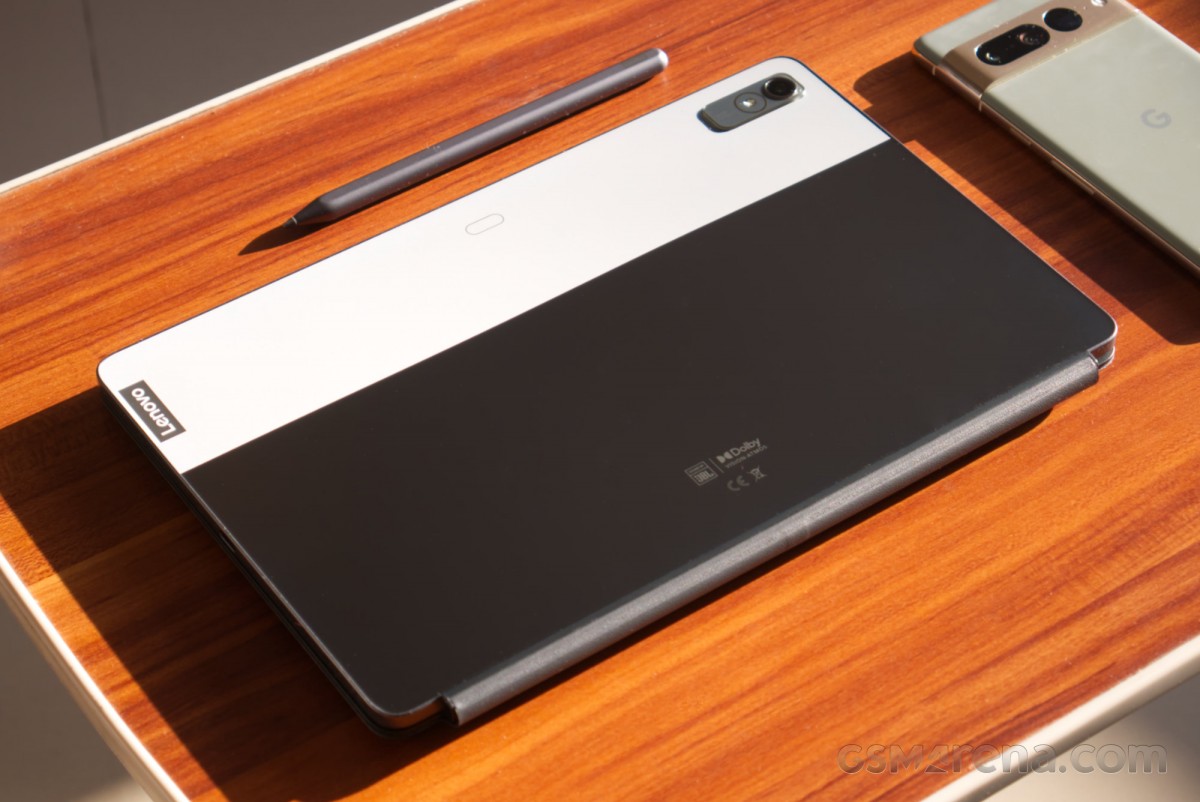 However, even if they look similar, the Gen 2 model lacks the aluminum body of its predecessor, instead opting for plastic back and sides. We don't think this looks particularly worse but it does feel less rigid overall. The back surface is also prone to highlighting fingerprints and smudges. 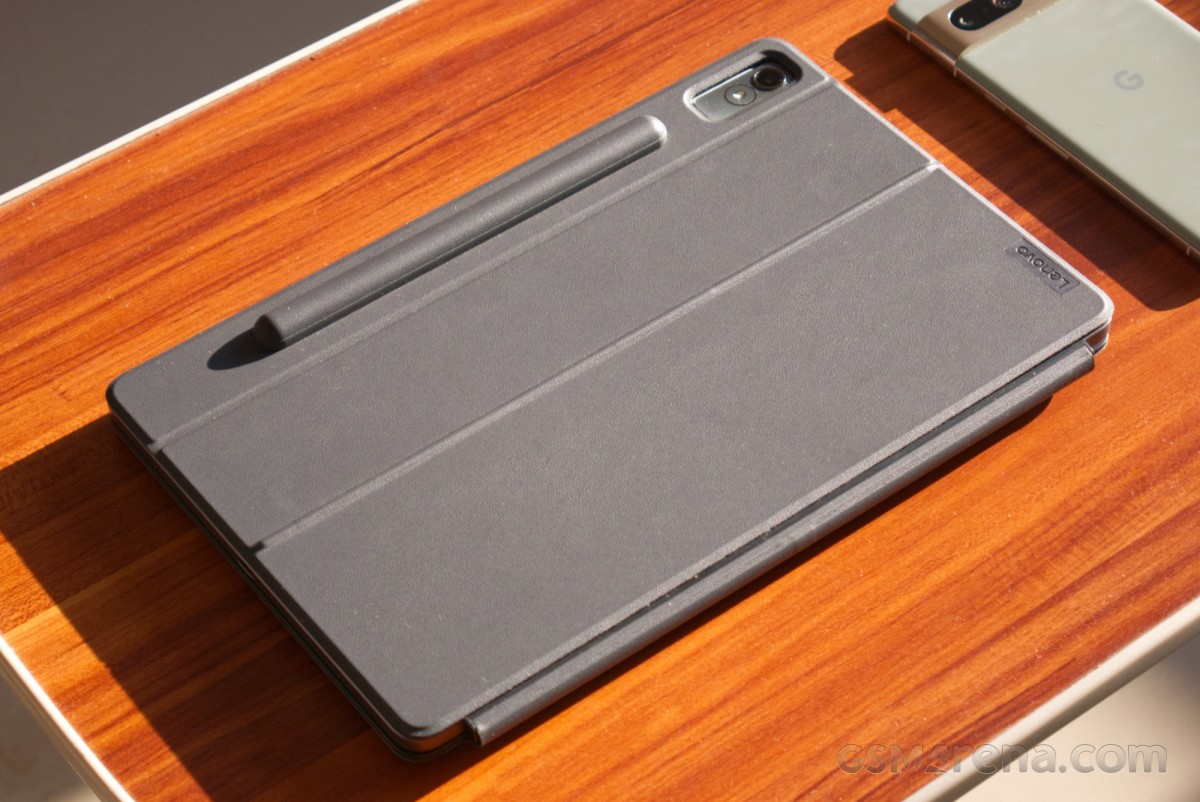 Our model was configured with the 2-in-1 keyboard, which is a two part accessory that includes the keyboard and a back cover. The keyboard attaches to the base of the tablet using magnets and connects using a physical connector, so it works even when Bluetooth is disabled. 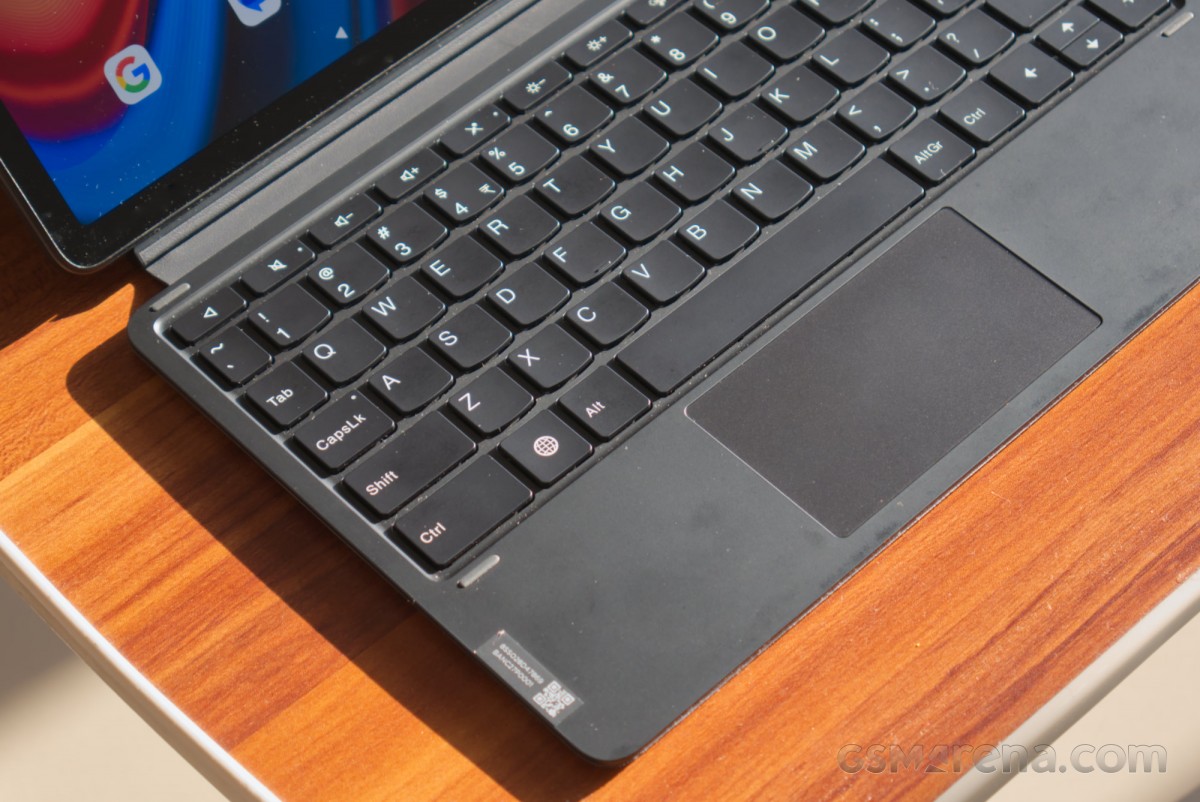 The keyboard has a Thinkpad like design, with reasonably spacious keys that have a nice tactile feedback. Some of the keys on the side, such as the backspace key and the tab keys are smaller than you'd expect but it wasn't a major issue. The keyboard has a matte surface, which unfortunately gets smudged easily.

Below the keyboard is the trackpad. The trackpad is a bit on the smaller side but works really well, with good tracking and extensive gesture support that allows for a wide range of functionality being accessible through just swiping motions. 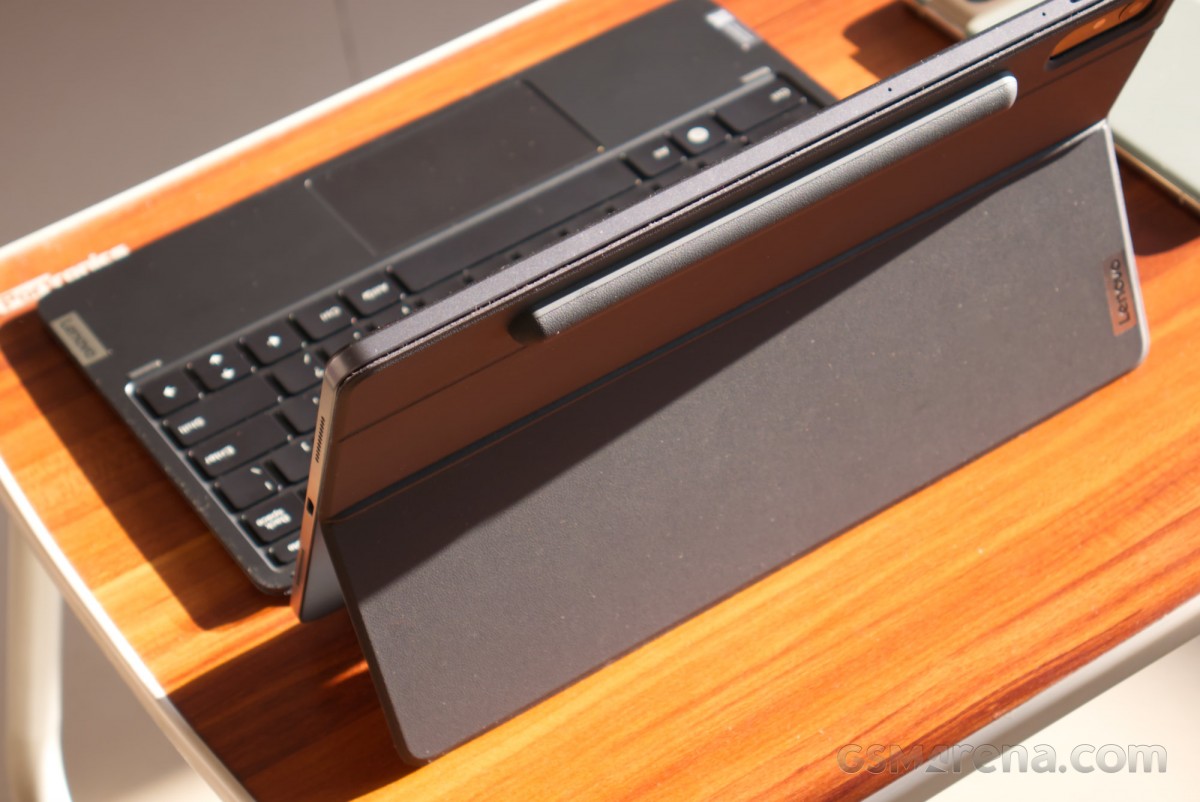 The included back cover has a flap on the bottom that can be adjusted to angle the display to your preference. The hinge is sturdy and has about 140 degrees of motion, making it very flexible. There is another flap on top of the back cover, which opens up to reveal the stylus.

While the keyboard accessory improves the typing experience on the tablet considerably, there are a few issues with it that mar the overall experience. Using the device on the lap isn't particularly comfortable unless you have very long legs that can accommodate the edge of the hinged flap on the back. Otherwise, there is a very real threat of the display just falling off and dragging the keyboard with it, something that cannot happen with a traditional laptop. 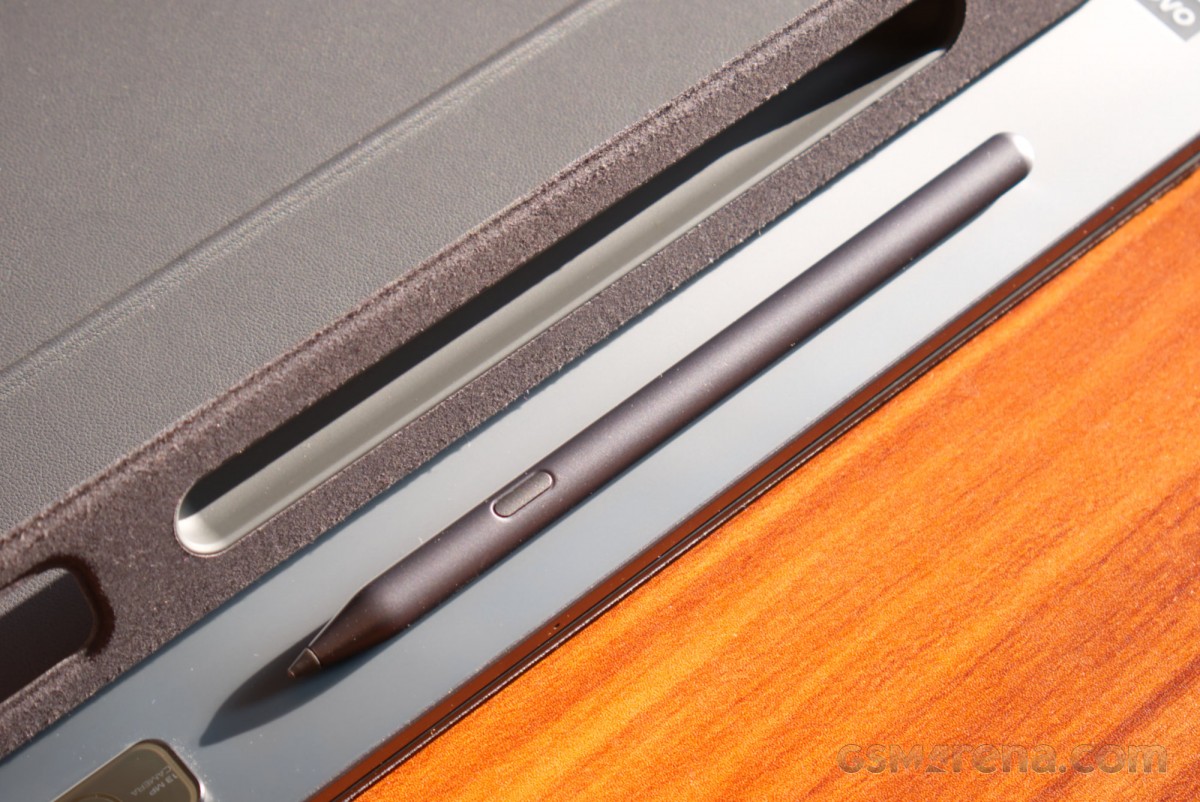 Second, the keyboard attaches magnetically to the display when closed and does so quite aggressively. Opening the keyboard to access the display is often a chore, as there is not much of a lip to grab on to to pull and the keyboard clings on as if for dear life. A weaker magnet system, a longer lip to grab on top, or a tab near the edge to pull on are all good ideas that could have been implemented to make your life easier.

The keyboard and the back cover have a soft touch outer surface that has a leather-like finish and generally feels pleasant to touch. The keyboard can be flipped behind the display, at which point it automatically gets disabled and the on-screen keyboard gets enabled.

Unfortunately, neither the tablet nor the keyboard accessory are dust or water resistant, so make sure to take care of them.

The display quality is good, with a wide color range and good brightness. The display is set up all sorts of wrong out of the box but can be quickly set to standard sRGB color range and white point by switching to the Standard mode through settings. The 120Hz refresh rate makes a world of difference while web browsing or playing games that support it. There is a bit of warping while scrolling when using the tablet in portrait mode as the display is wired to be used in landscape mode but it's not easily noticeable. 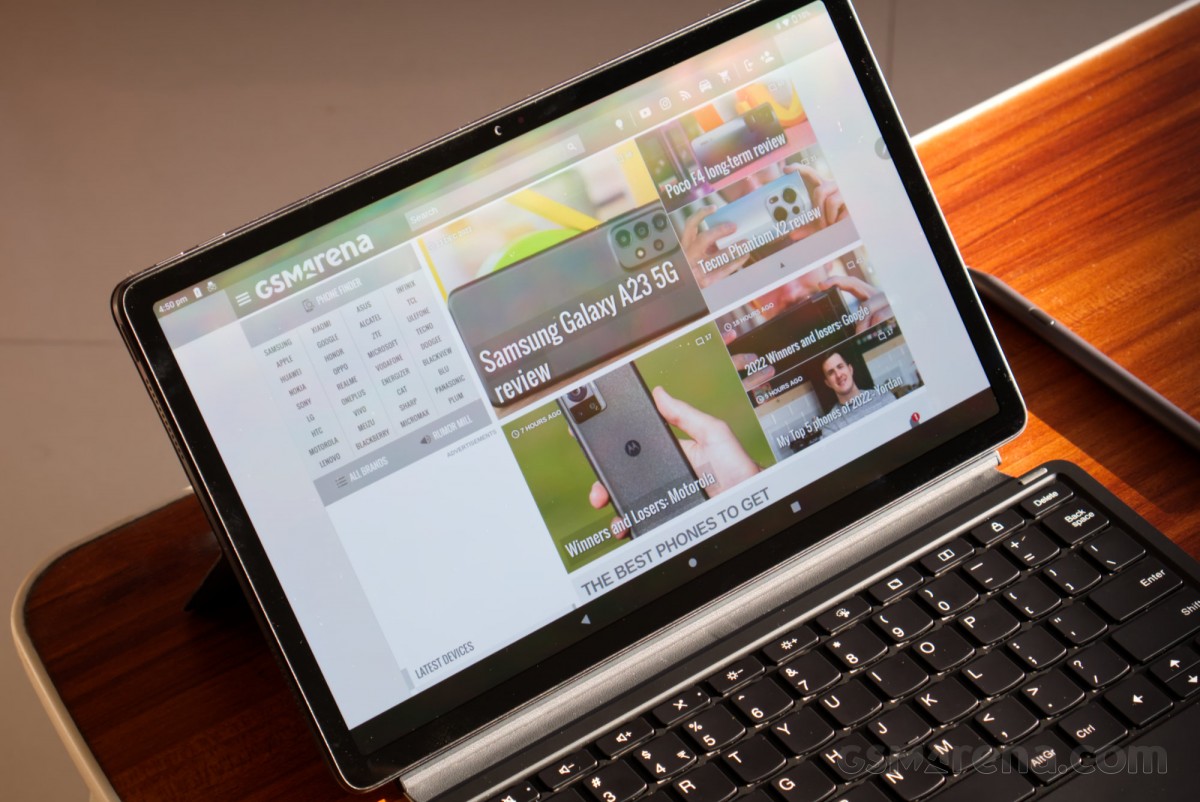 The display has two issues, one of which is in software and can be easily fixed. The harder to fix issue is with the viewing angles; the Lenovo Tab P11 Pro Gen 2 display, like several cheaper OLED panels on the market, has a noticeable green shift when viewing off angle. Normally, this is not an issue on phones but on a tablet, where the display can be quite large, looking at the screen dead-on in landscape mode causes noticeable green tint on the left and right sides. However, this is only noticeable on white or gray screens and otherwise not an issue.

The easier to fix issue is with HDR. While the display has good performance while viewing Dolby Vision and the relatively scarce HDR10+ content, HDR10 was broken during our testing in the current firmware. This led to raised blacks, which looked gray and caused the entire image to have a washed out appearance with reduced contrast. There also seems to be dynamic tone mapping permanently enabled for HDR10 content, which should never be the case as it interferes with the creator's intent. Hopefully, Lenovo notices and fixes the issue with raised blacks and either disables or provides an option to disable dynamic tonemapping.

The display also has support for the Lenovo Precision Pen 3 stylus, which works really well. You get hover support as well as pressure sensitivity. The latency performance is good, at least for the quick tests we performed, and should also be adequate for most drawing and note taking use cases.

I don’t understand people liked you. It’s like you live in a country where Apple doesn’t exist. Like you live on N Korea or something? Everything Apple makes is better and actually works correctly. You buy an $800 Lenovo Tablet and the screen s...