The Lenovo Z6 is arriving on July 4, and just two days ahead of its launch, its design and detailed specs sheet have been revealed leaving little to the imagination.

The Z6 looks similar to the Z6 Youth Edition - it has a waterdrop notch display on the front and a triple camera setup at the back positioned vertically in the top-left corner. But unlike the Youth Edition, the vanilla Z6 comes with a fingerprint reader embedded to the screen which measures 6.39-inch diagonally.

Like the Z6 Youth Edition, the Z6 is also made out of roll cage magnesium alloy which is the same material used for Lenovo's ThinkPad notebooks. 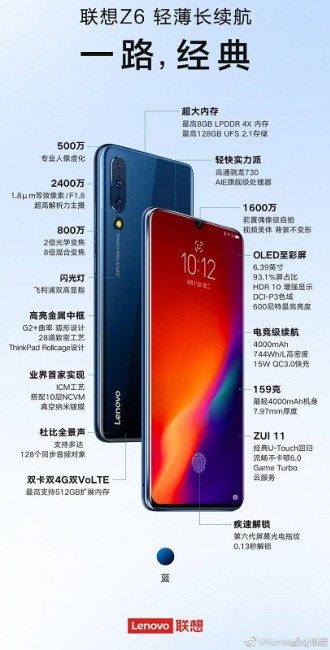 The Z6 is powered by a Snapdragon 730 SoC mated to 8GB RAM. The smartphone runs ZUI 11 and has 128GB of storage onboard, with the option to expand it by up to 512GB via a microSD card.

For photography, the Lenovo Z6 has a 16MP snapper on the front and a triple camera setup at the back which is a combination of 24MP main (f/1.8), 8MP telephoto (2x optical, 8x hybrid zoom), and 5MP wide-angle modules.

With all those details out, all that's left for us to know about the Z6 is its price and availability date.

Lenovo Z6 will come with a 6.39-inch OLED display and a UD fingerprint scanner

no it is sony sensor.

Why buy a phone with small battery when there is this phone available that has a 4000 mAh battery and still weighs only 160 g?

Get a phone with small battery