Lenovo's teasers for a gaming phone just became that little bit more real as official promo images leaked on Weibo. It will use the company's Legion gaming brand (which so far specialized in PCs, laptops and accessories).

The images show the a promo bundle (in a suitcase, as is tradition). It features two controllers that likely slide onto the sides of the included case. Each controller has several buttons and an analog stick. The Legion-branded thing in the middle looks like a headset case, but it's hard to tell from this image. 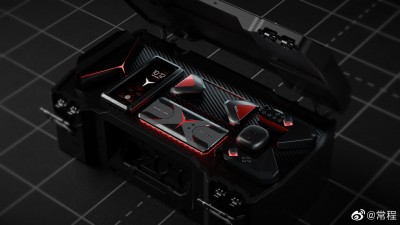 We don't know much about the specs yet beyond the Snapdragon 865 chipset with improved cooling (the company promises a score of over 600,000 on AnTuTu). Also, the phone will support 55W fast charging according to the latest teasers and will have 5G connectivity (naturally).

Lenovo is directly challenging Red Magic with tag lines like "No Red, It's Magic" alongside the usual aspirational stuff like "Stronger than strong".

Lenovo’s ZUI 11.5 Beta is now available along with Lenovo One

This phone will come with 90watt charging tho

Wow lol this is Coooool