LG G2 vs HTC One: Game of phones

The LG G2 is the new pretender to the Android smartphone throne and one that enters the fray with a bang. Well aware of the challenge ahead - and determined to make it an opportunity - the G2 comes duly armed. Four Krait 400 cores on the Snapdragon 800 chipset, a 13 megapixel camera with optical image stabilization, insanely thin bezels to a fabulous 5.2" FullHD screen are only some of the G2's highlights.

The LG G2 already made the Samsung Galaxy S4 sweat to stay in the match but now a different kind of foe is on its path. The HTC One will challenge the LG G2 with a metal-clad gapless body, BoomSound speakers and Beats Audio as well as Sense UI that moves away from Android dogmas and aims to bring your precious content right on the homescreen. 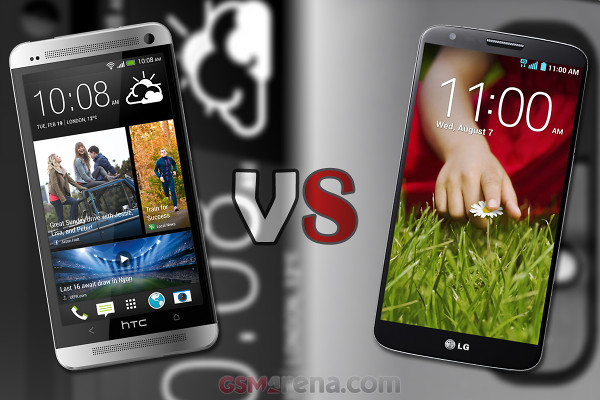 On the face of it, the HTC One should stand little chance against the much fresher LG G2. The latter has had precious time to prepare and draw from the latest in hardware. Belonging to the same school of thought of nothing-goes-in-and-nothing-gets-out (read battery and memory cards), the HTC One offers a better choice of storage. It's still one of the hottest-looking pieces of hardware this season too, so even the creative LG G2 may have a hard time matching it.

LG G2 over the HTC One

HTC One over the LG G2

Currently a brand new 16GB version of the LG G2 will set you back some 500 Euro, which coincidentally will also get you the base 32 gig model of the HTC One. That's something to definitely consider, along with the fact that a 32GB LG G2 will cost you 30% more than the 32GB HTC One.

The LG G2 gives you the obvious advantage of having a bigger display on basically the same-size chassis. Sure, the LG flagship is slightly wider, but it's not necessarily noticeable. What's more, there's that Snapdragon 800 to consider, which is way faster than the Snapdragon 600 inside the HTC One. It handles 1080p video recording at 60fps (the HTC One offers 720p@60fps) and literally rages through the benchmarks, although, in day to day usage, you won't exactly call the HTC One slow either.

Another thing to consider is the camera. The LG G2's camera is optically stabilized, just like the One's, but offers a higher resolution sensor, which produces clearly superior quality. To make up for it, the HTC One has the cool Zoe additions, which make the camera a lot more fun than on most phones.

We'll take a closer look at the hardware of both phones a little later in this review but at first glance it's absolutely certain both manufacturers had different approaches in this department. The LG G2 is all about maximizing the screen to the point you feel like you're holding nothing but display. The HTC One brings two front-facing stereo speakers for a more immersive media-playing experience. The cold hard, precision-cut aluminum body feels nicer than the glossy and slippery plastics of the G2.

Wherever your allegiance lies, this is a battle of old and new. The HTC One hasn't got the hardware chops to compete against the more powerful, newer LG flagship. It's a more straightforward device that seeks a balance between screen and sound, pixel count and size, locked-in mentality and looks. It has a custom skin that doesn't want to be compared to Samsung's TouchWiz but instead gives you BlinkFeed.

The LG G2 will have to work hard and take the HTC One seriously. The One has already won the hearts of many and with impeccable and standard-setting audio on top of the standard flagship-grade equipment. So, as we move on with this comparison, will be testing every facet of performance and strive for the most in-depth coverage of each and every worthwhile spec.

I have an LG 2 as well.the phone is still new but its problem is that it keeps droping important calls because it switches itself off.what shou;d I do to stop this from happening?