We've been enjoying an open season for a while, and yeah, the shootouts will keep on coming but it's a different kind of game now. What we have here is exactly the type that can, and will, see the hunted become the hunter.

Dragons, all three of them. Snapdragon 800-powered, 1080p-screen-flaunting, LTE-connected fire-breathing super-phones that know the Android crown is there for the taking. Which, by extension, would be the smartphone crown, period, in the eyes of the vast majority of users out there. 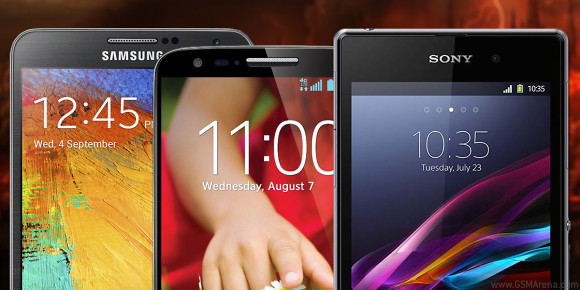 None of our three contenders will settle for a draw. They're playing to win, a position they've earned by making little or no compromise from the drawing board to the retail box.

The LG G2 has the smallest footprint of them all, but doesn't sacrifice screen estate. Just the opposite actually, it flaunts a 5.2-incher with the slimness of the bezels bordering on the insane. The G2 also has optical image stabilization - something the other two here lack.

Considering this is the smallest smartphone in the bunch, we can't help but be impressed that not only does it have a bigger display than the Xperia Z1 but also matches its 3000mAh battery. Here is the list of weapons the G2 hopes to help it win the battle.

Next up is the Samsung phablet. The Galaxy Note 3 is a monster in size but state-of-the-art technology lets you keep it on a short leash with the S Pen. Snapdragon 800 is matched by the others, but there's no coming close to the 3 gigs of RAM. The 13MP camera is pretty impressive too and we have the biggest battery of the bunch.

The screen of the Galaxy Note 3 is the biggest at 5.7" and the only Super AMOLED panel on offer. The S Pen is of course worth more than just a mention, not only turning the Galaxy Note 3 into a digital notebook but adding a whole new dimension to the navigation. The 4K video recording is another leg up on the competition.

Finally, the Sony Xperia Z1. For starters, it's almost as big as the Note 3 and way bigger than the LG G2, which has a larger screen. To make up for it, the water-tight Sony Xperia Z1 and is also dust resistant.

It has the best spec'd camera with a large 1/2.3" sensor (around 70% bigger than the smartphone standard) and 20.7MP of resolution.

There is perhaps too much screen bezel but Sony must've thought it's well worth the aluminum frame and shatter-proof glass used.

There's no easy pick here, considering they all have the latest hardware and software, but each of these smartphones has more than enough ways to connect to its audience. Unmistakably premium finish and water resistance can easily tip the scales in Sony Xperia Z1's favor if design and durability are high on your list. But then, if you want as much screen estate as humanly possible in a body that's still compact enough to be pocketable, the LG G2 has you covered.

Or, if a phablet is what you want, then look no further than the Note 3. Samsung premiered the stylus-enabled large-screened smartphones two years ago and has perfected its software to make the Note 3 the best handset with pen support you can buy.

But what if you want the all-round package? Well, you know the drill. We're going to look at camera performance, benchmarks, battery, the lot. So stick around, it's going to be an interesting ride.

That was useful, thanks.