The display of the LG G3 is by far its most notable feature. It is of the True HD-IPS+ LCD variety, with a resolution of 1440 x 2560 pixels and a 5.5-inch diagonal. This results in a pixel density of around 534ppi.

It's the same type of panel as found on the LG G2, and has the same great colors and good viewing angles.

The level of detail is obviously much better than that found on 1080p displays, but you probably won't notice it if you are simply browsing the UI. It's more apparent in the gallery and while watching videos than throughout the interface. 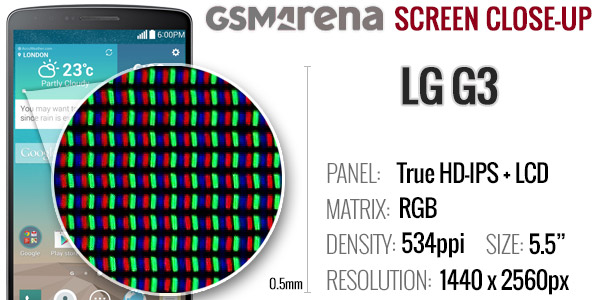 Contrast is another story, however, as the G3 is markedly worse than its predecessor both at 50% and 100% brightness. At 100% brightness the black luminance is among the highest we've seen, while the whites are markedly dimmer than on the G2. Here's how it stacks up to other top flagships:

The LG G3 has a very reflective screen, and the resulting sunlight contrast ratio suffers. Nevertheless, the 1440p display is readable in strong sunlight, even if doing so isn't the greatest experience.

The LG G3 is powered by a robust 3,000mAh battery, which in most cases would be ample, but in this case is almost mandatory considering the amount of pixels the device has to push out. We noticed that during periods of high exertion the device will adjust to lower maximum brightness levels, either to conserve battery or lower heat dissipation.

The G3 performed very well when it came to 3G talk time and standby, making up for the somewhat low numbers achieved when the display is on - ie. videos and web browsing. 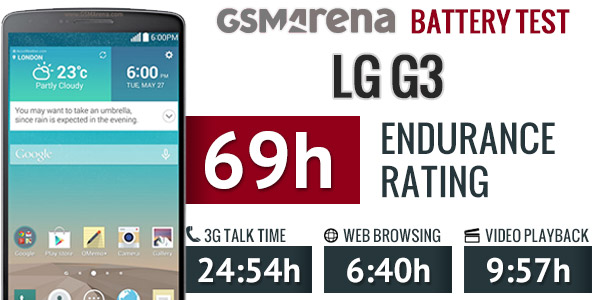 Update: we retested the battery life after the LG G3 was updated to Android 5.0 Lollipop. We wrote a blog post on how Lollipop affected its battery life and that of some other flagships. 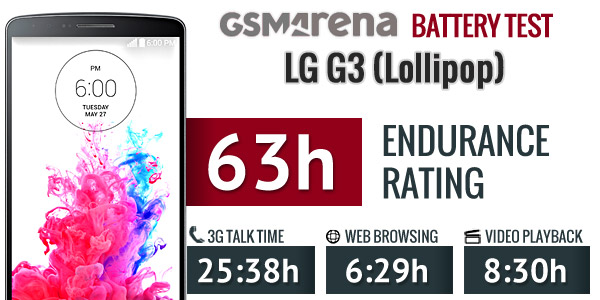 The LG G3 has quad-band 2G/EDGE support, quad-band 3G with HSPA+ (up to 42Mbps downlink) for the international version and tri-band LTE support too, depending on the model (the CDMA version also comes with LTE connectivity).

Local connectivity includes dual-band Wi-Fi a/b/g/n/ac (that's both 2.4GHz and 5Ghz), Wi-Fi Direct and DLNA. There is also stereo Bluetooth 4.0 and GPS with A-GPS and GLONASS.

The handset has a standard 3.5mm audio jack and an Slimport-enabled microUSB port, meaning you can use it to output content to an external screen with an appropriate adapter. The microUSB port can also be used in a USB host mode letting you connect various USB peripherals, but again you'll need a separately-sold adapter.

NFC connectivity lets you transfer files between other NFC-enabled Android devices via Android Beam, and you can also read NFC tags. Oddly, an NFC Tag manager is not included as part of the standard app package, so you'll have to download one from the Play Store if you want that functionality.

Otherwise, there's also support for Miracast streaming for compatible televisions, while SmartShare Beam lets you send and receive files to other LG devices over Wi-Fi.

Finally, the IR-port on the top of the device lets you control a wide variety of electronics and appliances via the QRemote app. QRemote has seen a wide range of improvements over its initial iteration on the G2, and now features a much larger database of TV sets, set-top boxes, and audio receivers than before. Even better, it gives you the ability to create a universal remote, complete with button mapping.

I bought lg3 in dxb but then the year after it suddenly corrupted and can't even do the hard reset.but now it totally can't be open..r.I.p to my lg mobile

I am having it for 6 years and he is still rocking it. Except night mode camera, but hey, 6 years old.

I bought my LG G3 in 2014. It has served me well until recently. It began with random shut downs. I was able to restart the phone and recharging the battery sometimes helped even though it was still above 50%. But last week it began shutting down...