LG's latest G series phone, the G6, is now available to pre-order in the UK. Retailer MobileFun has the device (SIM free model) listed on its website, and is offering it for £699. A release date, however, hasn't been revealed yet. 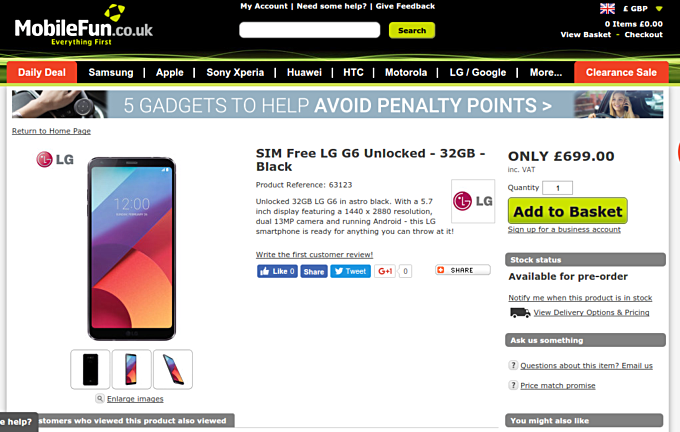 Among UK carriers, Three UK has already confirmed that it'll be carrying the device, but availability and pricing is yet to be revealed. In case you missed, the handset's starting price for the rest of the Europe is expected to be around €700.

The G6 is already available for pre-order in LG's home country of South Korea, where it will go on sale March 10. The handset's Australian launch date has also been revealed - March 28. Over in the US, while all major carriers have confirmed they'll be carrying the phone, pricing and availability isn't yet revealed.

All major US carriers will sell the LG G6

Apparently it's you who needs to start using yours... The Exynos in the S7 Edge is better than the SD821 (2016 SOC, a slightly overclocked SD 820) in the LG G6. The screen is better. Battery Life is better. The camera from what I've seen in several w...

Not a chance. Sorry LG, I might have been interested if it had the quad hi-fi DACS, but with that cut-down spec and premium price, no. Ah well, I'll just hang on to my S7 Edge until something demonstrably better comes along.